I Think the Magical Yarn Babies Have Taken Residence in My Stash, However (The VogueKnitting Live 2016 Debrief) 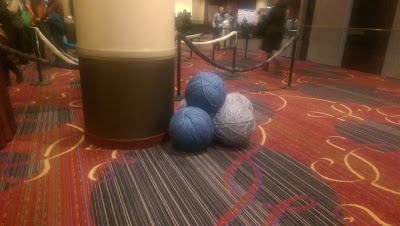 Another year, another VogueKnitting Live debrief. Luckily, nothing else was going on this year behind the scenes.  That also means I have no excuse for purchasing a package and spending over $100 dollars to go and spend more money. Oh well.

In General
This year was a lot saner than last year.  Well, not in the amount of yarn I bought, but in what they were offering.  I don't know if it's because I spend all of Sunday attending class and lecture and was distracted but both all the pretties and other people on Saturday and therefore missed the crazier stuff (well, OK, crazier than this thing: 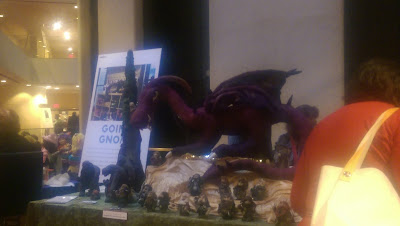 ), but it still seemed like what they were offering was rather tame.

The Class and Lecture
So, because it turns out that with VogueKnitting's price increases this year, it only cost me around $10 more to buy a class/lecture/marketplace package than buying the marketplace and class al la carte, I did so. It doesn't help that the package is called the Times Square Day Tripper Package. Because that's exactly what you want to be doing as a native New Yorker, going to Times Square.  On a weekend.  Where all the tourists and wonky, shady characters are.  I might still be a bit sour that VogueKnitting moved to a hotel smack in the middle of Times Square, meaning I have to go through there on a weekend, but anyway...

The Lecture
I signed up for the lecture called Knit to Flatter by Amy Herzog.  Now, lectures always feel a little stunted to me, but that's simply because they're only a hour long, and most of the people giving them are used to classes.  This has nothing to do with this lecture in particular, by the way, it's just something I've noticed from the past two lectures after taking a lecture and a class back to back for the first time.

However, this lecture was semi-interactive and funny, and made some good points.  It turns out what she was discussing (how to make a sweater that you would wear 'out to lunch with a non-knitter') is something I've already done, however, her point about fabric behavior being crucial was something I don't think I fully appreciated before.  Also, the statement that (and I'm sure I'm paraphrasing a bit here) 'the yarn's not growing [when you block it]. It's not making magical yarn babies' will forever be in my vocabulary (it was also used in the context of pilling, as in 'when the sweater pills, it's not making magical yarn babies, that's material from your sweater'.  I knew that, but that way of putting it is still funny).

The Class
First off, all the really interesting classes this year seemed to be scheduled for Friday, which kind of sucks.  Even if I could have taken off of work (I couldn't have this year anyway because I was too busy in company-approved training on how to build iPhone apps), I wouldn't have.  However, I did find a Sunday class similar to one I spotted on a Friday date at first, and that was Seams Like Surgery by John Brinegar.

The good news is that the class was good.  It was well-taught and led, we laughed at jokes and, for me, I learned some decorative seams as well as how to better due mattress stitch.  It turns out I've been doing it pretty well, but his way of thinking about the instructions really helps with porting the technique away from stockinette.  I was immediately able to seam a garter stitch item much better afterward despite that not technically being taught.  While I will say I probably could have learned most of the material off of the Internet, I still don't regret taking the class.

Fashion Shows and the Panels
Honestly, I didn't catch too many fashion shows this year, and absolutely none of the panels.  Actually, I don't think they had any traditional panels this year.  The had events like participating in extreme knitting! (no thanks; I like my needles smaller than I am) and...I don't remember.  Anyway, I did catch part of one, and two other fashion shows and they were pretty meh.  Nothing too crazy.  Nothing standard or overly practical either (after all, this is a fashion show and when is fashion not overly artistic over practical), but nothing that made me go WTF?!?

If anyone from VogueKnitting is reading this, let it be known: I like the WTF?!? stuff; the best part of what makes VogueKnitting VogueKnitting was making fun of some of the stuff considered fashion.

Anyway, there was a couple of questionable items, including a really bulky garter stitch cardigan (what is it with rug-looking cartigans?): 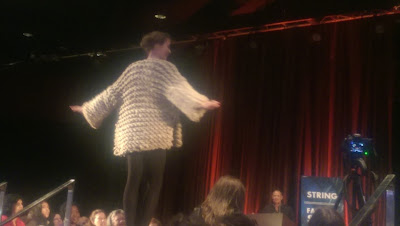 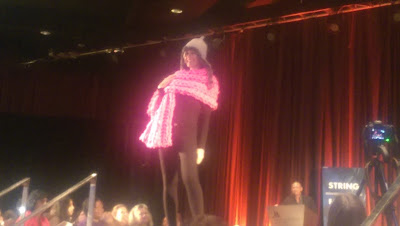 Otherwise it was your standard sparkly shawls and batwing sweaters that make the model look like they have short stubby arms, and as normal items that you're going to get that meet current trends. Oh well.

Purchases
Beyond my quickly-becoming-normal behavior of 'buy all the yarn for all projects I want to do now and then some!, in the early hours of being there Saturday this is the exchange I had with my mom over text:

Me: LOL I found self-striping yarn that looks like watermelon
Mom: Interesting.  Are you at Vogue?
Me: Yes.
Me: Want something?
Mom: Yarn for the baby blanket pattern you sent
At this point, I'm thinking 'this is the wrong place to look for yarn for a baby blanket', but this is my mom, so...
Me: Ok, will look.

So I got stuck running around the marketplace, desperately trying to find a DK like yarn that had enough quantities to make a baby blanket.  Now, there's two things about VogueKnitting that I don't know if my mom gets: 1) it's mostly mid to upper range yarn that is the type to not have dye lots and be hand-painted (oh, and good luck finding one that can be washed) and 2) there's usually limited quantities at shows.

At one point, I asked my mom what her budget for this was, because I was finding really nice superwash yarn where the vendor had multiple skeins, but it was all at least $25 dollars a pop. Her answer was '$100 or so', so that cut those out. I ended up having to get three different colors of Malabrigo Rios at the Knitty City booth of all places (I try not to spend all my money at the local yarn shop booths; I can go to them here if I want and there's other vendors you can't get anywhere else attending, but sometimes they have the right stuff when you want it), because there wasn't enough of any of the colors I liked.

I ended up sending her another pattern to consider that used three colors as well. I also ended up buying her a present: 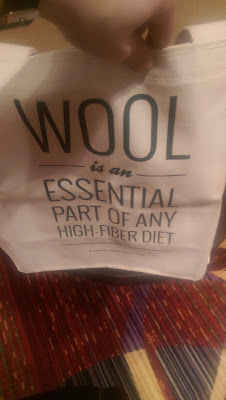 Because the joke is funny alone, it's even funnier when carried by a crocheting dietitian.

Conclusion
All in all, I had fun.  Sure, the fashion shows are getting boring and their free non-marketplace offerings were slim this year, but the class and lecture made up for that (despite having to pay extra for those). I really need to stop buying all the yarn, though, despite the fact that I did need a bit of it this year as I didn't have anything suitable in my stash.  And I am using it now, so this isn't a 'shove in there and leave it for two years' situation.  Well, maybe the yarn I bought for myself with no pattern in mind will be that, but half of it won't.

We'll see what next year brings.
Posted by CompileYarn() at 11:03 PM