I Fail at Yarn Chicken

I guess this doesn't really count as yarn chicken as I actually had another skein of it, but I was hoping not to have to break into it, damnit: 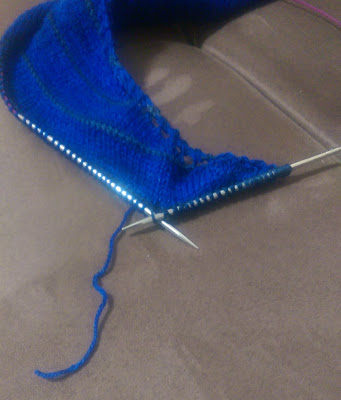 That was how much farther I had to go with the royal blue color to finish the last repeat I decided to do.  A measly one or so inches.  But of course, since the other choice was ripping the whole last repeat of the pattern out, I did bother winding the second skein to use a tiny, little bit to finish the body.

I'm now on the border, which is a bit more fiddly: 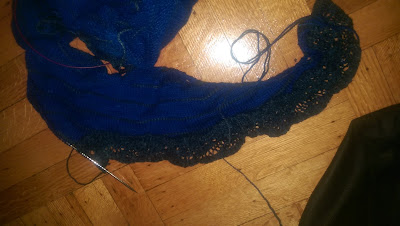 And oh so even slower. But it's still coming along, which I guess is a good thing.

However, as it's a lace pattern and so I can't travel with it much, I've ended up knitting this as well: 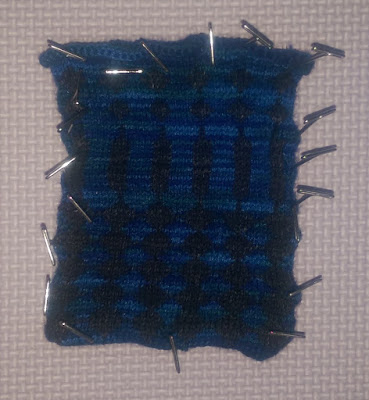 A bag.  Where it's obvious I got bored and changed up the pattern a couple of times.  I was going for a medieval look, but the yarn I used kind of ruins that...however, that's what I had at the time, and I was playing with a concept there.

However, since I now have to carry my work phone on me for my next SCA event (yay for being the only support for my apps now), I thought I would make a new bag with the first pattern there.  With better colors. Though it also turns out that all my sock and lace yarn is variegated modern stuff.  Because of course it is; why else would I buy the random skein unless it was nicely colored variegated sock yarn?

Guess I know what to get at WEBS this year now.

Posted by Unknown at 8:58 PM No comments: