Misadventures in Shawls, Part 4: For Better or Worse, It's the End of the Road

Hey, I had a productive time void for once:

I have to say, the last chart and half the chart before were pretty fast and simple.  Actually, they were so easy I went on autopilot and missed the fact that the second to last row had a double decrease.  On both charts.  The first I really had to hack the fix, so bad I did some weird 5 stitch increase, then had to pick up a bar from a couple rows below it on the next right side row to attempt to fill up the gap the crazy decrease had made.  I was partially successful: 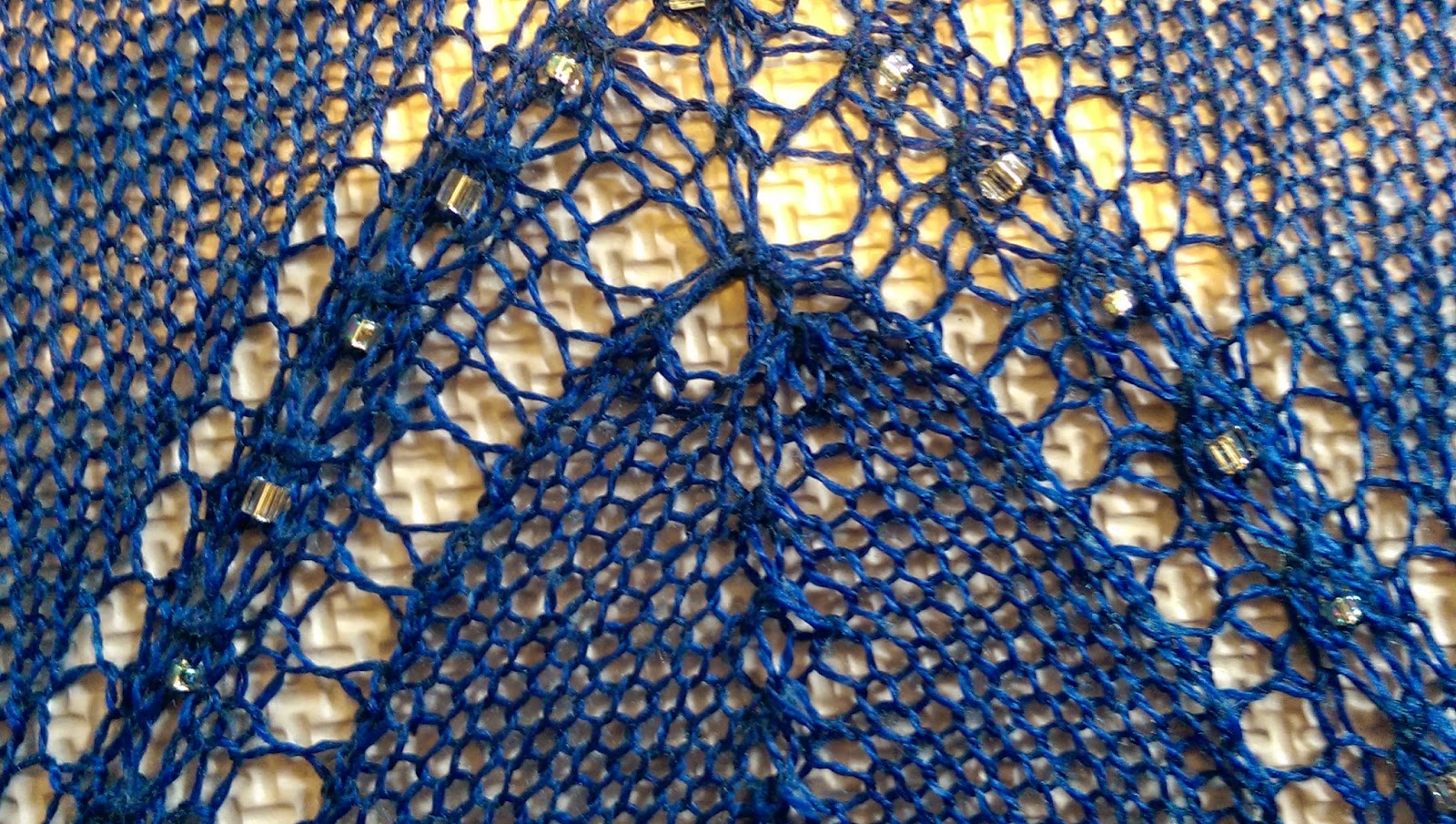 Unfortunately, at that point the life line was so far down I didn't want to rip it out to do it right.

Then, I missed it again with the last chart, but at least all that took was an extra row of knitting added to decrease down to where I needed to be.  That did cause a gap in the beads in the top band: 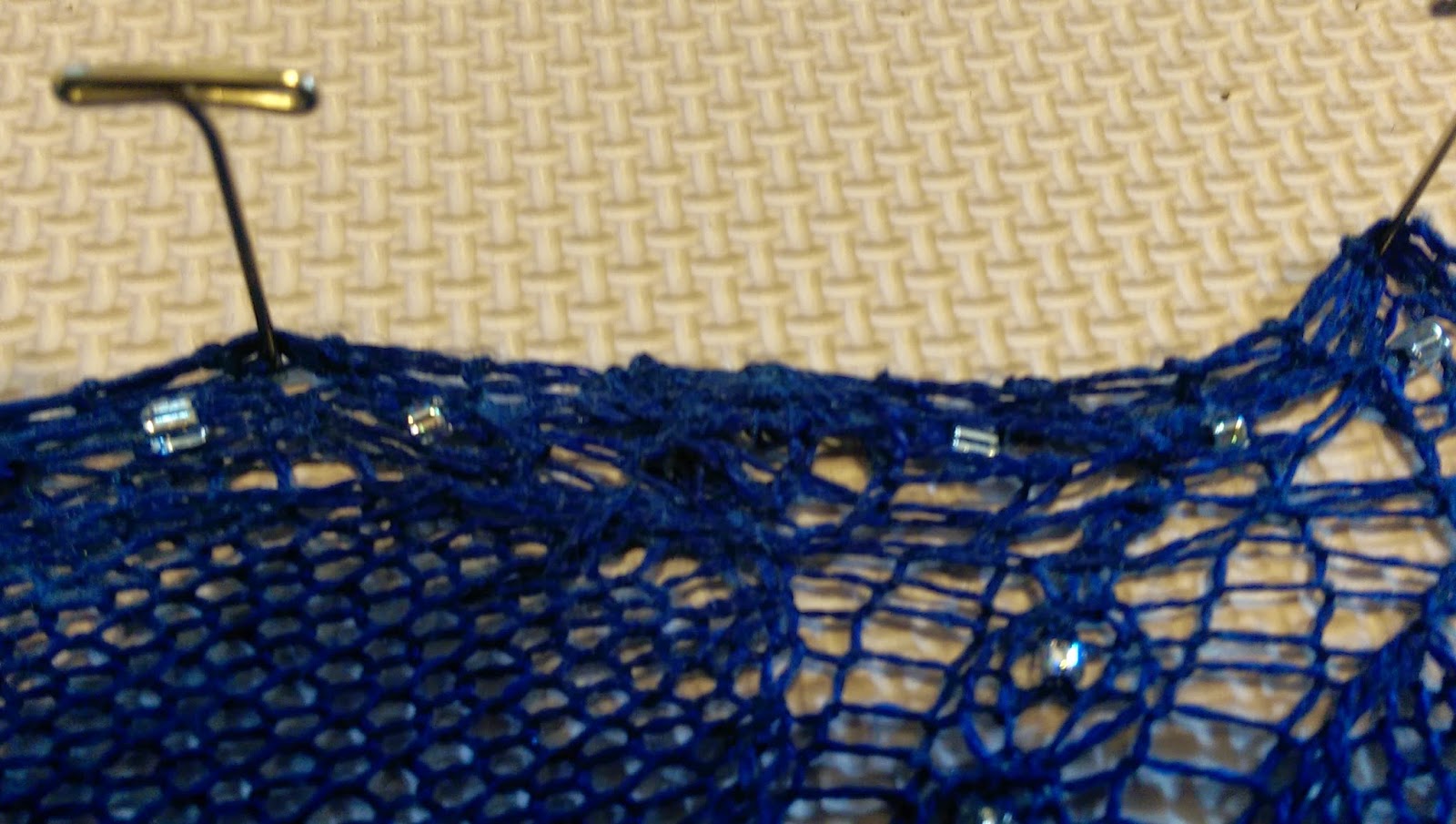 Of course, blocking it wasn't very simple either.  I'm not talking about the multitude of pins; that's to be expected.  I mean that I forgot what Madelinetosh yarn loves to do: 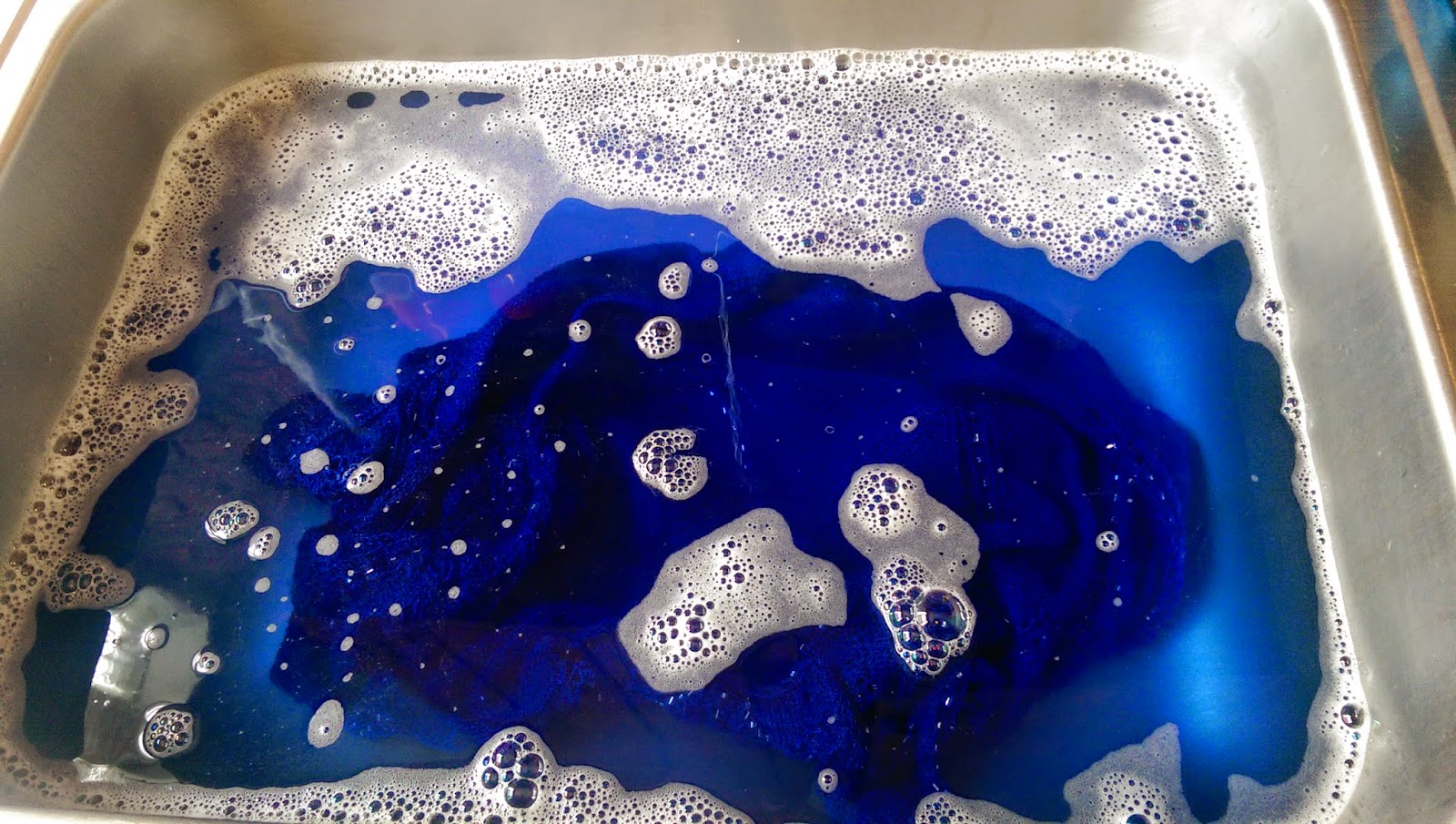 Bleed.  Two vinegar baths later, it's still bleeding but no where near as badly: 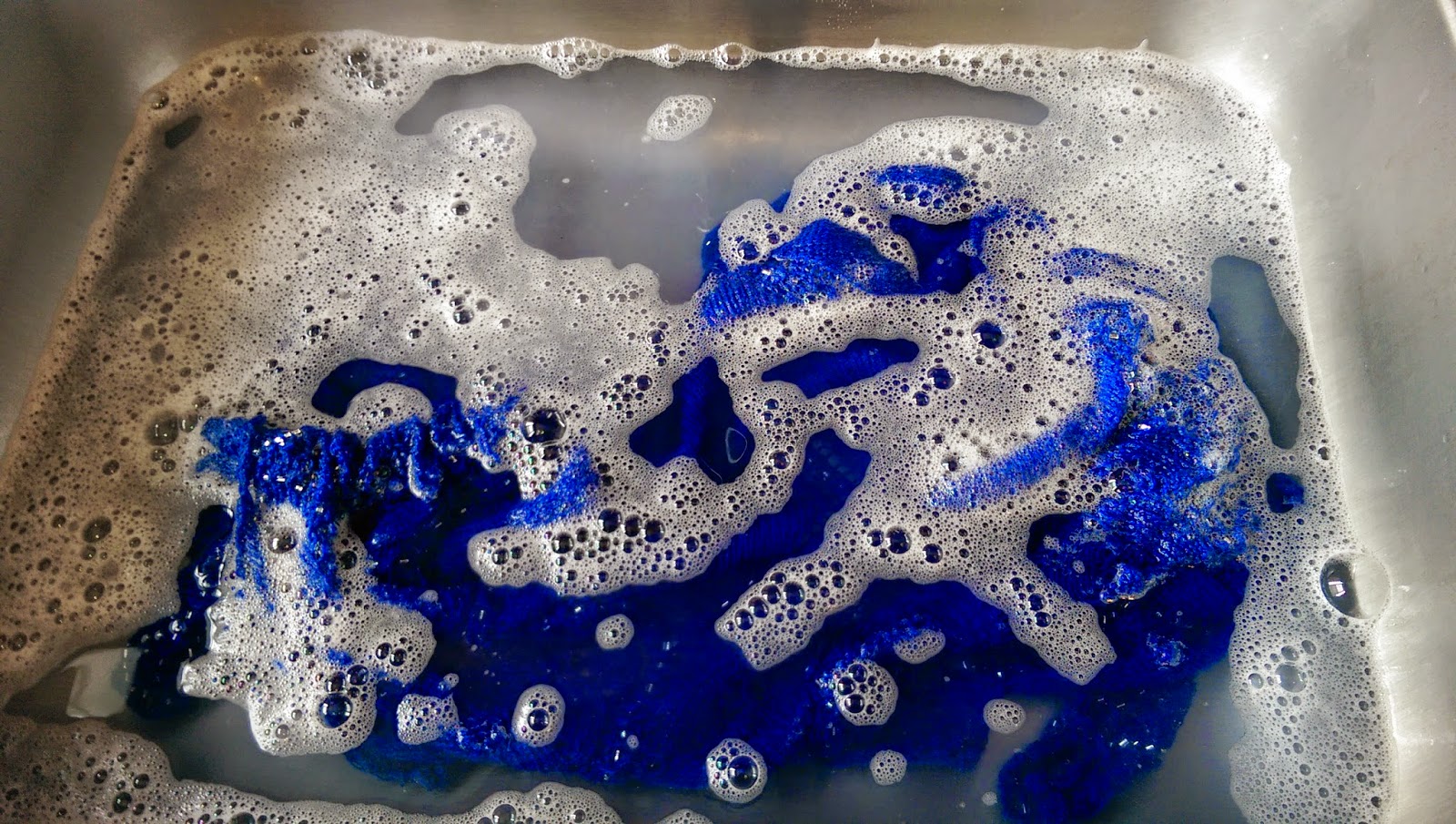 That's when I ran out of vinegar and therefore gave up.  I gave it one more soap bath and took it out.  Good enough.

That first picture, by the way, doesn't do it justice as to how shiny those beads can be.  They gleam blue and other colors depending on the light: 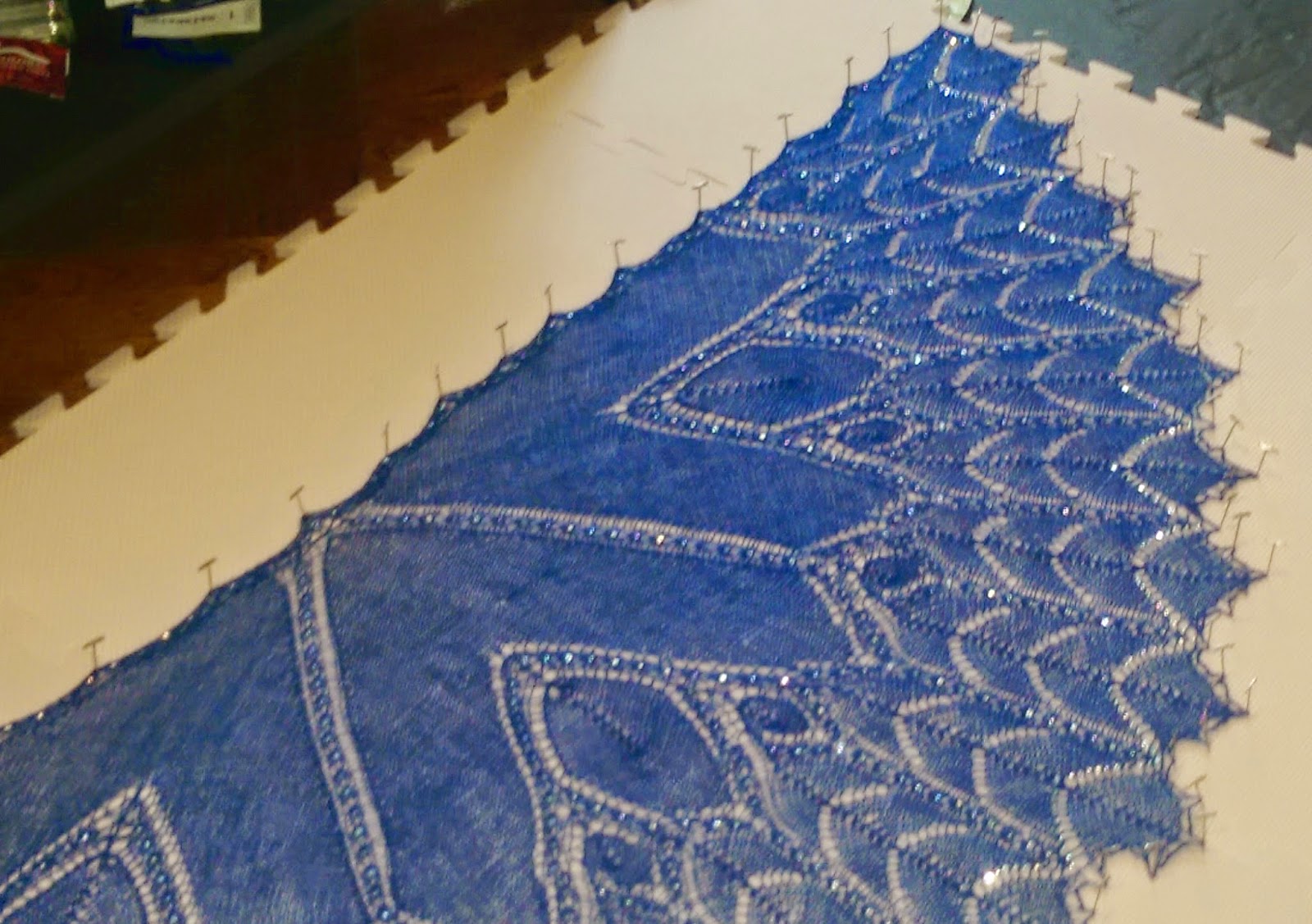 That picture still doesn't do it justice, but whatever.

Part of me feels I should still do a proper debrief but...meh.  I covered most of what I would put into a debrief into this post series.  The only thing I can think of that I didn't mention was row 67.

Row 67 was the only row where I did it, checked my work, checked my work again, and still couldn't figure out why it was wonky because as far as I can tell, I followed the pattern right.  You see, row 67 did something weird.  It shifted the pattern over by a couple of stitches.  It also seemed to want 8 stitches for the end of the row section, yet there were only 6 before that and 6 after.  It made what I thought were small leaves look a bit more like spirals, or at least leafy blobs with something trailing off the left side.  It jagged the lines of yarn-overs and stockinette sections.  It looks better after blocking, but still.  I don't get what happened there or if I screwed up somewhere, or the pattern was the wonky one.  No one else on Ravelry who has done the pattern has mentioned it.

But oh well.  I guess it worked out well enough in the end.  As more than one person has said to me (and I've said to others, not that it stops me from doing the same thing), no one else notices all the mistakes you do.  So while I'm beating myself up about how it's not my best effort and it's got so many mistakes in it, and it's a wedding shawl and it should be my best effort and so forth, the two people I've sent the picture to have both complemented it.  One of these was the recipient.  So I did something right.

Posted by Unknown at 5:46 PM No comments: