Lessons in Math, or the Things I Shouldn't Be Doing

EDIT 6/3/2015: made the rule more general and removed the assignment = sign because that's not math, that's a programming concept.

The sad part about having a thousand things to do that don't include this blog post is that very little yarn crafting gets done.  It doesn't help when you now have company on the train ride; it's not conducive to working on projects. But that's a whole different story.

This story is about what I've gotten done.  Mainly, about how I forgot how math works.

You see, when my knit group decided to do stuffed animals as its next "knit-along", I decided to do something slightly different and crochet a holy hand grenade instead[1]: 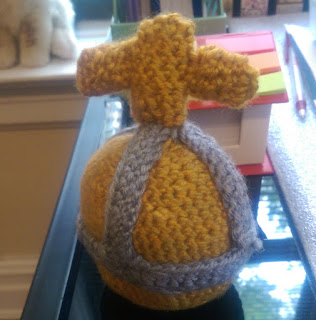 As you can probably see, it's not my best effort.  I lost track of the beginning of the round in the sphere, didn't do invisible decreases, can't sew straight, and the cross on top was the bane of my existence. This is of course what happens when you buy the yarn and a crochet hook that's slightly too small for it on the fly and start the project on a bus.  Anyway, since I had to buy a full skein of the gold yarn for this project, and the grenade isn't that big as written, I ended up with most of a skein of gold yarn left.

So I decided to make a bigger, hopefully less screwed up, one.  But in my quest to do so, I failed math.  On the suggestion to make a grenade double the size, I immediately found a crochet sphere calculator (using my phone, on a bus...this seems to be a trend that ends badly) and doubled the maximum number of stitches which make up the equator of the sphere.

This doesn't double the size of the sphere, by the way: 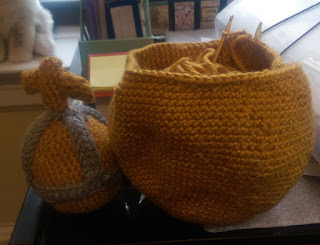 It makes it way bigger than that.

You see, doubling the circumference of the great circle in the sphere does double one thing: the diameter of that circle. However, when we say 'size' what we're really referring to is the volume of the sphere; how much space it takes up.

What I should have done was double the volumn of the sphere.  Is there an easy way to do that in terms of equator size?  In order to figure out what the hell happened and how to do this on the top of my head, I did it the hard way first and did some math.

The original sphere was about 50 stitches around.  My gauge was 6st per inch.  So that give me about a 8.3in equator, or using the equation C=pi*2r, a 1.33in radius.

My 'doubled' sphere was therefore 100 stitches around. That gives me an 2.65in radius.

This isn't the rule, by the way.  The rule actually turns out to be this: take the cube root of the multiplyer you wish to place on the sphere's volume (in my case, this is 2, so about 1.2599) * the circumference of your original sphere to get the circumference of a sphere with m*volume[2].  Let's write that in math: C(m) = cuberoot(m)*C.  That's how you change the size of a spherical item.

And people don't believe me when I tell them yarn craft is technical.

[1]My mom is convinced that now I'm on some watchlist due to the amount of bomb patterns I've been introduced to by doing this (there's a lot more on Ravelry than you'd think). Because this is the craziest thing I've looked at on the internet.

[2] I was having issues figuring this out on my own, so thanks to my boyfriend's WoW friends (particularly the one who is a mathematician) for taking up the problem and figuring the actual rule between volume and circumference out for me.

Posted by Unknown at 9:38 PM No comments: