The Tale of a Broken Needle, Part 2, Or Why You Shouldn't Switch Needles in the Middle of a Project

The good news is that I finished my Mom's Hanukkah socks with time to spare: 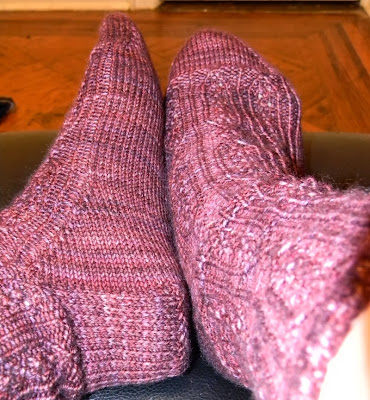 The bad news is that, contrary to every other sock set I've knitted so far, the second one came out a bit bigger than the first: 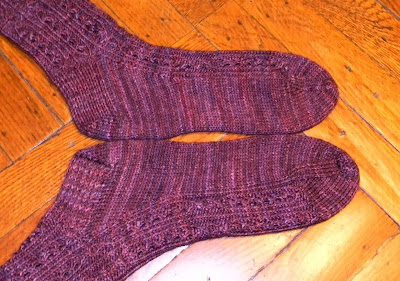 Which sucks because the first was the perfect length.

Now,  I know I did the exact same thing for both of them.  Thing's like these types of cable, lace, motif, whatever patterns make it easy to write 'stop at row x' and to do so, since you're keeping track of rows and can see where you are via the pattern.  No, I'm pretty sure the difference in size is due to the fact that I had to switch needles to knit the second sock.

If you go back to this post, you'll see why that was unavoidable.  However, you'll also note that I mentioned that my gauge shouldn't be that different with another pair of nickel-plated needles.  So, I got all excited and ordered new sock needles for that size: 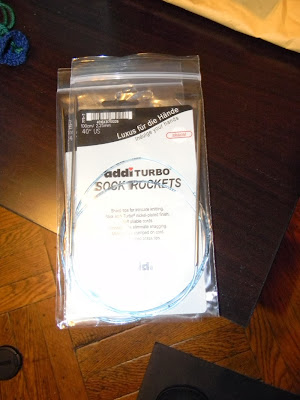 And just cast-ed on and went, conveniently forgetting that my analysis was based on the fact that the Knitter's Pride Nova needles and the KnitPicks Options are very similar (I wouldn't be surprised if the same manufacture makes them).  What isn't that similar are those Addi's I decided to buy because ooh, needles made for Magic Looping socks!  Must have!

So I failed, and now have two slightly different sized socks: one with a gauge of  11.25 rows per inch and another with a gauge of about 11.75 rows per inch.  And it's not like I can just rip back and adjust it so they're the same length because of the pattern; it'll be very obvious if I did that.  So...it is what it is and hopefully my Mom doesn't mind.

Of course, what I should have done, had I not been blinded by nice, new needles, was go buy the same needle brand.  But what's done is done, and it's not that far off that they're unwearable (and it's better to be bigger than smaller).

Since one of the reasons for this blog is learning from my mistakes, the moral of this story is that you should never switch needles in the middle of a project if you can help it, unless you're able to adjust for it.  And if you do have to, use the same exact needle brand and type (I shouldn't have to mention they need to be the same size too, right?).  Because your gauge really does differ between each needle, no matter if they're made of the same material, no matter how slightly, and that can be the difference between a perfect fit and slightly too big or tight.

On the other hand, the Addi Sock Rockets are really nice needles, and I loved working with them.  May have been worth it.
Posted by CompileYarn() at 10:37 PM No comments: