I think I've done more frogging than knitting the past couple of weeks.

I can't say much because at least I'm now working on yarn crafting projects again.  Between the month of sewing I had to do this summer and some other miscellaneous stuff going on, I didn't really get back in the yarn crafting gear until the fall hit.

Sure, I did finish a pair of socks for my husband (finally, and without losing one this time!): 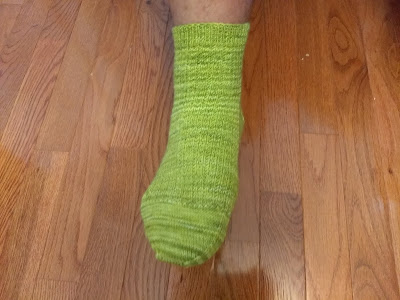 But the rest of the time since went like this:


I mean, it's probably a good thing that I've gotten my design groove back.  I'm looking forward to getting something out there given the time it's been since I've had actual time and inspiration to devote to this.  But why do I have to make it so hard on myself when I could just simply work on something already written or easy without struggling through all the frogs?  Then again, I write software as a day job.  It all involves sitting there and beating your head against the wall wondering why on earth you're doing this when what you did isn't working for the 5th time...until you figure it out, get something done, and feel accomplished and confident.  Then you're more than willing dive right back into another wall because it won't be as crazy this time...right?

And if I have to frog that cowl or the sleeves one more time, the yarn is shot and I won't know what to do with myself.  Probably ban it back to the timeout corner.
Posted by Unknown at 10:12 PM No comments:

Since this is a pattern I am eventually planning to write up and most likely sell, I won't show you much, but here's a teaser (after I ripped out most of it): 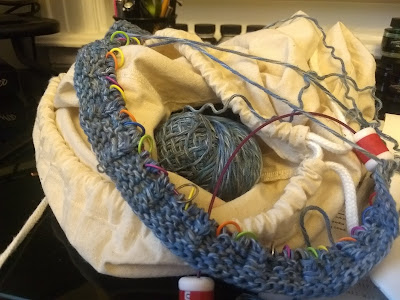 What makes this even more...well, I guess what makes it make more sense is that this is the second reproduction of this pattern. Story goes like this:


And here we are. Back to almost the beginning because I missed one last increase needed for the pattern to work.

Oh well. At least I have time to knit again.

So this was just the last year's worth of crap going on that lead me to end up abandoning the blog for...two years, yikes!.  Grad school is completely done, work is ok at the moment, and everything else is not where I thought I would be when life went crazy, but it's now stable, so I should be getting back into the swing of things now. There's a lot of catching up to do so I may not get there right away, but I'll try to start blogging my mishaps and future projects again.  There should be a number of those shortly.