In Other News, I'm Still Here

So I am a lazy bum who just got out of obsessively watching the Olympics for over two weeks and realized that I haven't written a blog post in over a month.  However, this lazy bum also has been spending half her free time studying for the GRE, and the other half trying to keep up with social obligations, projects, and the fact that she really needs to keep her apartment a little cleaner since a roach decided to chase her out of the kitchen yesterday (I'm no where near a slob and the kitchen wasn't insanely dirty either, but I had been keeping dishes in the sink overnight.  Not that you could ever get a kitchen to a level of cleanness that completely stops them from coming in, over, whatever.  I also have a roach phobia so...yeah).

Anyway, I did get my cardigan done, finally: 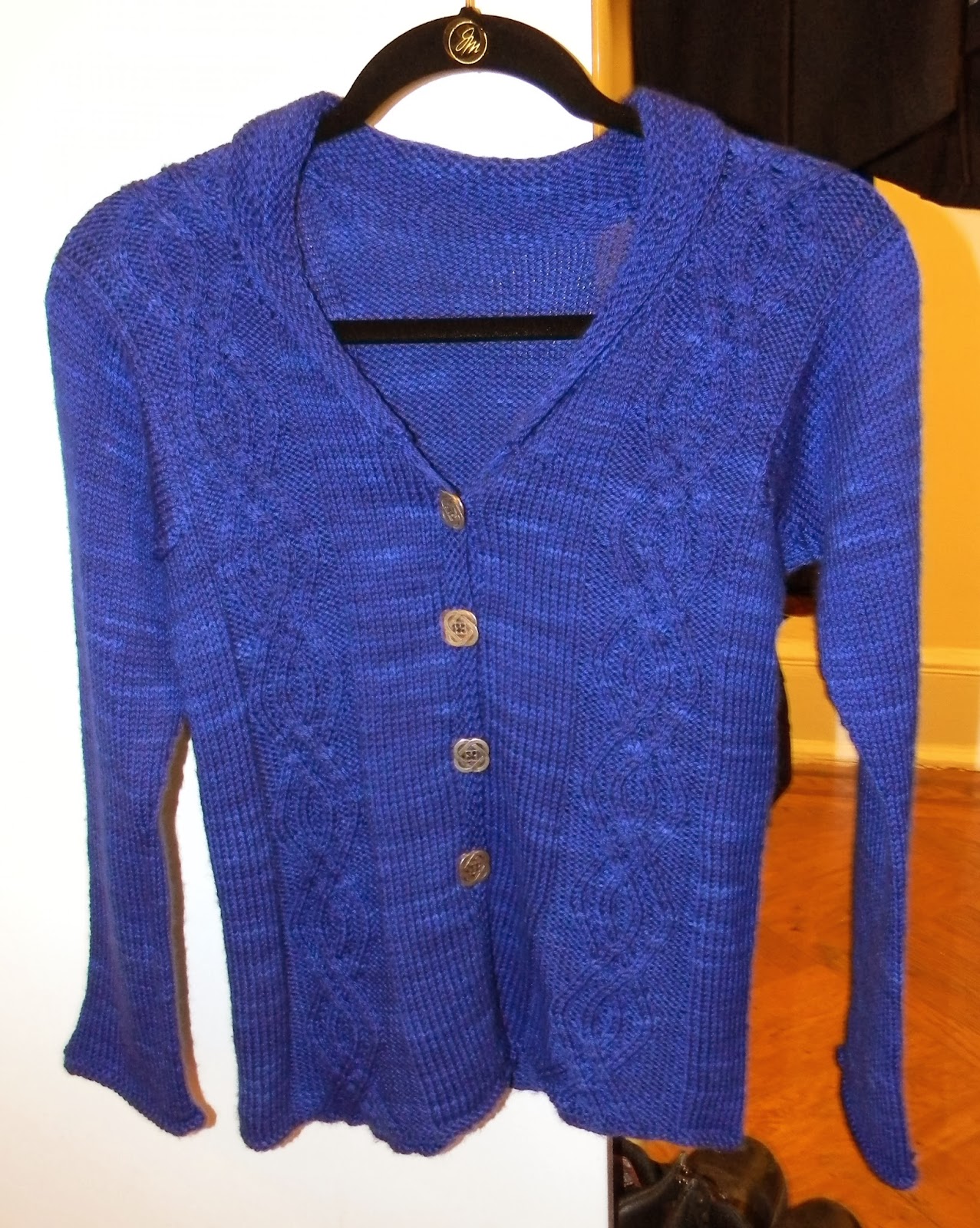 Of course, this was after I ripped out the collar three times on top of all the stupid little mistakes I make while knitting.  My swatch lied, or otherwise I was blinded with my love of this yarn, this pattern, or both, because when I blocked it the thing grew.  Not massively, but enough that it felt like it was just hanging on my shoulders, with a huge neckline and floppy collar.  Also, I spaced the buttons out too far and they were gaping.  After throwing it into a corner and sleeping on it so I didn't rip the whole thing out in spite, I ripped out the collar and button band.  I then ripped out three rows of the back before realizing that that section was the only one with live stitches and now I had to pick them back up (which didn't work 100% -- there was an unexplainable gap where the extra yarn hung out at the end of the live stitches and the start of the bind-off -- but I was able to hack it enough and the collar hid it anyway).  Once I fixed that, I decided to go down several needle sizes and re-knit it with new yarn (well, that wasn't a choice because I murdered the yarn when I ripped it out).  Along the way I decided to put one more button and less spaced out, and put less decreases in the collar.  The first thing worked (though I did bind off a bit too tightly), the second thing didn't.  Collar was now too small.  So I ripped that part out again, added more decreases and knitted over the short rows a bit more so the fronts were bigger.  That produced a do-able collar, though I had to sew it down to keep it folded.

I'm still not completely happy with it; it really needs a tighter gauge (damn worsted weight acting like a DK), one button band is slightly tighter than the other, and the collar isn't exactly what I would like...but it does fit more or less now and is extremely warm.  Oh well.  Shit happens.

I probably should do a proper debrief, but right now it's 11pm and I'm tired, so I'm off to bed instead.