In the black hole of my disappearing act, of which only part of it had to do with knitting, I've been trying to design a tank.

It is not the same tank I started with in the last post, no.  That was the tank I did my usual 'throw planning to the wind, swatch once, and start' act on, and it failed miserably.  I was so certain I would start from the bottom, but I kept ending up with too many stitches.  Several tweaks later, I decided to start at the band.  I calculated how many repeats I would need based on a similarly designed swatch, and went at it.  It started looking a bit big, but no matter, the cables will close it up.  It kept looking a bit big until I ended the chart, held it up to me, and...oops, did about seven too many repeats.

I checked my gauge, found it wanting, so I looked at my half-assed calculations, which were changing with every whim I hit.  It was all wrong.  I ripped out the last ball I joined, looked at it, and...decided that this was the wrong yarn to use.  Too bulky, too big, didn't work.

So I started hunting down more suitable yarn.  I actually went and bought a skein of one 'okay it may work' yarn and wound it up.  Then I decided to work on other things that didn't require as much thought (and need to get done as well):

Well, ok, maybe a little.  I had to rip out a few things in that sweater too.

Anyway, while I was putzing about on where I would get the yarn for this tank I want to make, I also kept thinking about what to do with the yarn I had originally bought.  It was just sitting there because I didn't bother putting them up, of course.

Then I got a better idea.  Another tank, but one that would work with this yarn.  Simple, easy... 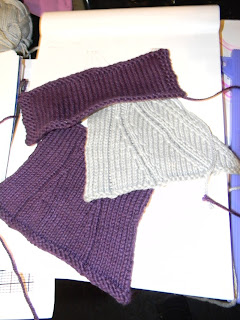 ...and, it turns out, a pain in the butt to calculate everything. Of course it is.

I know this because I swore I would do this properly this time.  I would not quickly calculate how many to cast on for my size and go.  I would swatch properly, calculate everything out, then adapt to my size and go.  It helps that I got a 'up to 75% off your first class' coupon from Craftsy (because I signed up and only took free courses, then forgot about it) and I used it for this class.  Because, hey, ten bucks for instructions on the crap I keep doing wrong; it's a good deal, right?

Well, I haven't finished the class, but while it was worth the 10 bucks for the sparks I needed to figure out how to organize this stuff into a set of competent calculations, there are parts I've either 1) got so bored because it was below my skill level (computer skills, actually, not knitting.  She explains in minute detail how to use a spreadsheet.  I get why, but some of us have, you know, even programmed macros before) or 2) didn't get the reasoning behind it.  I'm at a part that is supposed to help me, but her setup wasn't working out for my tank.  I don't know why, because there's some magic numbers in her calculations and even when someone asked her in the comments to explain it, she didn't.  But thanks to the comments, I remembered I bought this book: 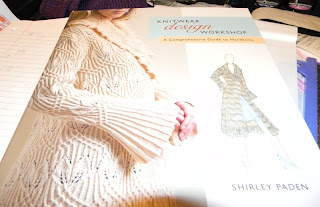 It was a random, get free shipping on Amazon buy.  I half-forgot about it, thinking a lot of it wasn't so relevant.  However, a comment in the class pointed me in the right direction, and I found that it contains a much simpler way of doing the same thing.  That worked.  Translate it into a spreadsheet to auto-calculate and...ta da.  Another thing half done.

Ok, part of it is my life intruding.  But most of it is because I keep going off on one tangent, deciding against it or running into a brick wall, and going off again.  That part of the class I got confused on?  Was about calculating slope.  Which I first tried to do using inches and the slope of a line formula, and couldn't quite even out the slope to go where I wanted it to in stitches.  That's when I watched that segment of the class.  So I've done that part about three times now.

At this point I could technically cast on.  I have the stitch count where I need it, I just need to adjust for my size directly (I've been using standard measurements so I have a constant).  However, since my efforts have been all over the place, I'm not sure if I have everything to at least easily calculate where to proceed.  And I'm still not done with the class.  Decisions, decisions. The problem with designing is there is no base and way too many decisions.

So, I'll probably continue on to the end of the class, then do a quick look at what I have and start writing/knitting  But it's taking all my effort not to get frustrated at all the wasted planning and just cast on already.  However, we know where that goes.  It goes like this: 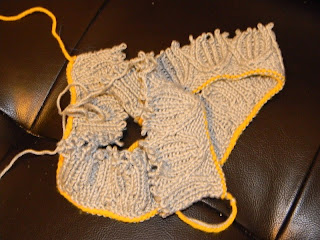 Badly.
Posted by CompileYarn() at 7:37 PM No comments: