The Tale of a Broken Needle

I finally got to the toe of the first sock I'm making for my Mom: 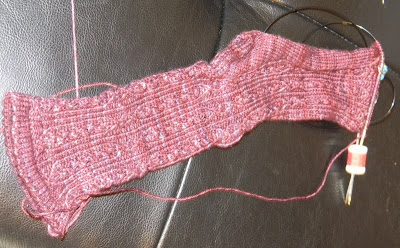 I was all like, whoo hoo, I only got 18 rows left. I'll finish the sock while at the laundromat.  I'm on track for getting both done by Haunukkah.  So I packed up my laundry and my knitting (standard protocol), get to the laundromat, start my laundry, and knit one row before one of the needles decided to rip away from the cable:

Not pop out (I've had that problem with KnitPicks needles before).  The cable broke. Granted, magic loop is hard on the circular needles and that spot had been snagging a bit, but this is the first time I've had one break.

My first thought was: ah, man, now I got to order another one and wait a week to finish the sock.  You see, I'm not one of those knitters that has a gazillion copies of the same needle (I have a few repeats, manly within the interchangeable set, but not many).  For my long sock-sized circulars, I have one circular of KnitPicks Options solid 47" in each size from US 0 to 3, and three Knitter's Pride Dreamz wood needles in sizes US 0 to 1 1/2.  And the only reason I own the wood ones was for the last socks I made for my Mom, in which I used an alpaca/silk blend that did not tolerate my metal needles at all.

This is actually important to the story.  Because, you see, when I ordered the three wood needles from WEBS last year (which got delivered right after Hurricane Sandy.  I was impressed it got here at all), there was a mistake in the order.  They had shipped the size 0 and 1 1/2 Dreamz needles, but had sent me the size 1 in Knitter's Pride's Nova line, which is a metal needle very similar to the KnitPicks Options.  So I contacted them to inform them of the mistake and asked how I should ship the metal needle back so I could get the wood one I wanted.  They told me to keep the metal one and they'd just send me the one I ordered (which they did very quickly because WEBS is good people).

Guess what size I just broke? 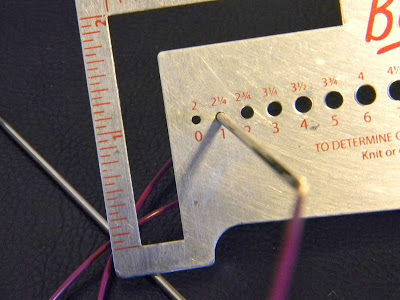 Yep, the size 1s.  So someone else's mistake worked in my favor today, and I can finish the sock and start the new one without having to wait for a new needle.

Now, a few of you may be going: But wait, didn't you say you had the wood ones as well?  Isn't that also a backup?  No, and the reason is because different needles can produce different gauges, and this effect is in full force if the needle is a different material.  Since wood is less slippery than the light metal used for the Options/Nova needles, it causes a slightly bigger gauge.  For me, it usually has an effect of making my gauge a half stitch bigger. Now, there is the slim possibility that the Nova needles will also change my gauge, but since they are the same material, it's way more likely to have a small effect if anything.  If I was doing it properly I would re-knit a swatch to make sure.  Since I'm on the toe of the first sock, I really don't care.  As long as the toe and the second sock don't come out radically different than the first one (which can happen even with the same needles for me), it'll work.

Now, I'll fully admit that there is another solution I didn't think of until now.  I do have the full Options sock DPN set as well. I could switch to those, just to finish the toe at least (I would be very wary of trying to knit the second one on DPNs after doing the first one Magic Loop.  Despite it being the same brand of needle, DPNs screw with my knitting style and therefore will most likely change the gauge even more.  And there's the fact that I don't like DPNs).

Nothing like the random coincidence that ends up working out. Anyway, at least I pack backup projects and got some of another present done: 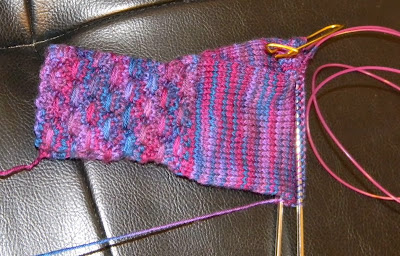 [And yes, I know I haven't done the Rhinebeck debrief yet.  I'll be honest and say that it was great but very similar to my experience last year, so I dunno what to actually debrief, which is why it's not the post before this one.  I'll show off yarn and pictures at least.  Next post.]
Posted by CompileYarn() at 1:08 PM