I said I was going to post about Rhinebeck and...I don't know what to talk about.  I re-read my post from last year and realized that my experience was pretty damn similar.  I went upstate, stayed with family, went to the fair, had a fun time, and went back home.  It was great but it was pretty much a repeat of last year, minus the class I took then.  I didn't take a class this year, so I can't even talk about that.

So, I guess I'll just picture dump then (not that I have many good ones.  I seriously have just as many pictures of cats this year, and none of the yarn): 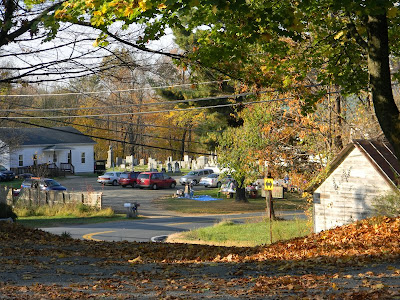 The view from the porch of the building my sister's apartment was in (slightly north of Duchess County).  Pretty leaves. Still loooove the fall upstate, though it was freezing cold both mornings (it was better during the day).  Dunno what was going on at that church over there though.


The billboard on the way to the fair!  They seem to use the same design every year, though this is the first time I got a picture.  I shouldn't have been on 9G anyway (the billboard is at the intersection of the road from the Kingston-Rhinecliff bridge (it's also a highway, but I forgot the name) and Rt. 9G.  It's meant for people coming from the bridge, which is why it's at a weird angle here)  Turns out you can drive straight down Route 9 through Red Hook to the Fairgrounds.  Duh.  I turned in Red Hook, got on 9G, and got stuck in all the traffic coming off the bridge to the fair.  Took me 30 minutes to get through it.  On the other hand, when I went Sunday, there was no traffic and I got there early because I was expecting to crawl for at least 10 minutes.

I got to the fair with plenty of time though, and got to see everything this time, more than once (several times in some cases...hey, you miss stuff the first two times). Saturday was crowded (figures with all that traffic), so I did more looking than shopping that day, though my mother and I are a bad influence on each other and so we both ended up with unplanned things that Saturday (favorite quote from her this year: 'I'm buying so  many things for myself this year and not for other people!'  I told her that was a good thing, that she should make stuff for herself).  Sunday I ran around with my sisters, and bought most of the yarn I wanted.  I also convinced my poor college student of a sister that she had to buy some yarn there, he he he.

For some reason, I have no pictures of the actual fair, but a few of sheep: 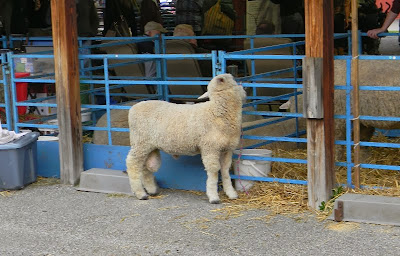 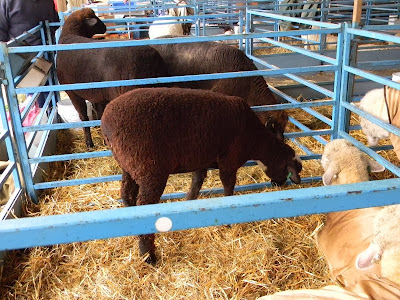 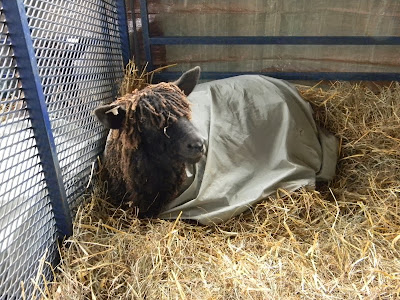 ...and a llama (llama llama duck.  You're welcome for the earworm): 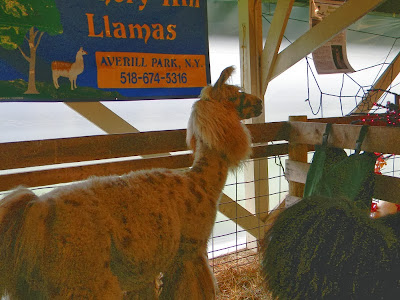 Wait, I took this bad picture of a shawl I really liked and want to knit: 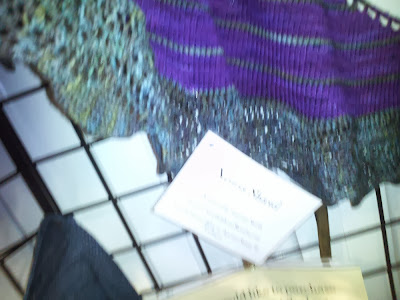 So...wait, did I mention I have tons of photos of cats? I won't derail completely so I'll just post a few that go with a story about yarn.  Saturday night I spent lazing around my sister's apartment. Of course I had bought some of the yarn I bought that day (not the stuff above.  Other yarn.  You'll see). One of her cats (she has two) first decided it liked the yarn I was knitting with: 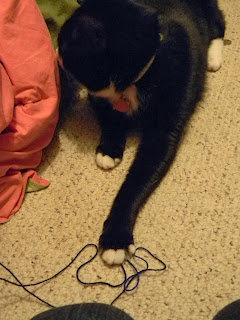 And then decided it wanted to get the new yarn in my bag: 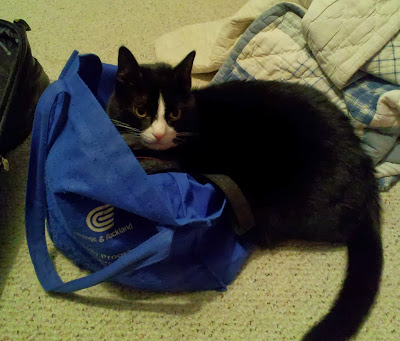 And then decided that on top of my yarn and bag was a good place to sleep:


I eventually moved the yarn to the suitcase so it didn't become cat toys overnight.

On Sunday we did dinner and then I drove back to my parent's place.  Since I was lazing about on Monday as well and never made it to the bus to go back to the city (took off Friday and Monday.  Yay four-day weekend), I took pictures of what I bought:


...and then decided to go check out the new yarn store that opened up the next town over this year.  Because Rhinebeck wasn't enough yarn.  Anyway, it ended up being a pretty nice store, and I had a nice chat with the owner since I was the only one there mid-day Monday.  Turns out she had organized a bus trip to Rhinebeck on Sunday, and she also had bought more yarn than she needed (her actual statement was closer to: 'I bought some yarn and then asked myself why I was buying yarn; I own a yarn store').  I also bought a skein of yarn, and signed my mother up for the mailing list because she keeps saying she's going to go check out the store and never does (I also told the owner about her so now she has no excuse).

After the yarn store, I went to a local park and took more pictures: 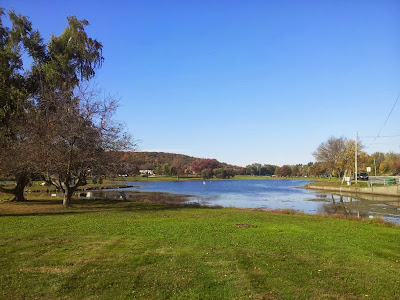 I also sat in the island in the middle of the lake and knitted a bit.  Because why the hell not;  I had an hour left on the meter for my car.

And that was my weekend at the New York State Sheep and Wool Festival.  And with the cats.

Next year I'll take photos of the fair instead, I promise.
Posted by CompileYarn() at 9:04 PM