As it Turns Out, I Didn't Get Too Distracted (Xeina Shawl Debrief)

So I did manage to finish the Xeina Shawl this weekend:

Despite all the minor problems, I think it came out pretty decent.  However, it also came out *huge*, which is completely my fault. I did a number of extra repeats in the body since I was using lighter yarn and later decided to just work the body until I ran out of one skein of the blue yarn, 13 repeats in total.  Yeah, in hindsight, I probably should have done 10 or 11 repeats instead, especially since the lace border came out bigger as well (probably due to using lighter yarn...heavy lace weight blocks out lacier, it turns out: 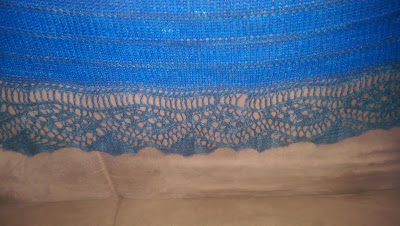 ). When I realized it was blocking out really big, I measured it, and it's 80.5 inches long, and around 20 inches deep. As a 5 foot aught woman, it means the tips of the shawl go past my knees.

Though I probably shouldn't fret about it being big. I rarely wear shawls as intended; I usually use them as coat stuffers, and having a big shawl with some cashmere content means I have a neck warmer with length to wrap it around my neck and down my coat.  Or over my head and around my neck.

However, I'm still in love with the color scheme I used and how it works in this pattern, so I am a little sad this won't work so well with a dress. Not that I want to be wearing this now, with all the 85-90F degree weather we've been having here.

Ah, screw it, I'll do this properly:

The Pattern
I have little to say. It's a solid pattern that I had no issues with. All the issues I ran into were due to my misjudgement, not the pattern itself. Also, while it took me months, let me note that this was due to not having time to work on it much and the fact that I was using lighter yarn. If I had been using the sport weight yarn as intended, I could see this being a 2-3 month pattern with downtime, not a 6 month one.

The Yarn
I used Spirit Trails Fiberworks Sunna (the royal blue color) and Spirit Trails Fiberworks Nona (the darker blue). Sunna is a fingering weight and Nona is a heavy lace weight, by the way, and so not recommended for this pattern unless you're willing to do what I did, which is do more repeats and get through more repeats of the lace pattern (which, honestly, if you manage to get the right count for the lace part after adding stuff, I commend you.  I didn't, and had to fudge it, then fudge it again when my first fudge was miscalculated). However, these are beautiful yarns, especially the Sunna.  The Nona one unwinds a bit and sometimes sticks to itself or splits, but I find this an issue with most lace weight yarns.  I have a funny feeling that the issues I had, especially with the yo and k2tog rows in the body, wouldn't have happened if I had a heavier yarn than lace weight. Such is screwing around with the yarn choices.

Two warnings though: they do grow like no body's business (shame on me for not swatching, I guess) and it bleeds:

Conclusion
All in all, it worked out, other than the size. And even that doesn't render it unusable. Also, now I finally have one of my big projects done.  Now back to using more of my backlogged stash.