A Cacophony of Chaos

Well...I would say a lot of things have happened in this void, but in terms of yarn craft, I would be stretching the truth somewhat. I mean, sure, I got a couple of minor things done, mainly these bags here:

I got the second one done just in time to use it, so I guess that was good. As well, I did finally get and set up a new place to store my yarn stash: 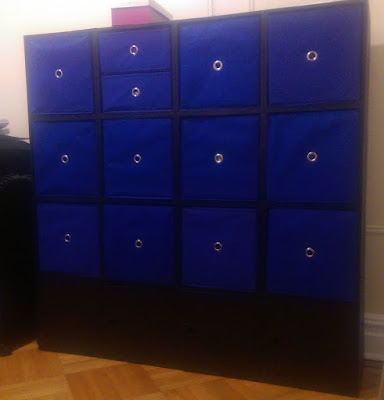 But otherwise, I've been starting and working on a number of things that still ain't done, of course. Like the Xenia Shawl: 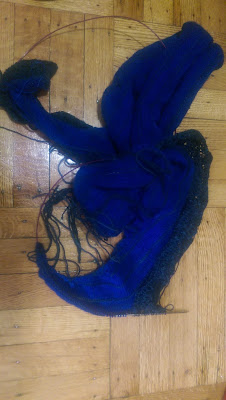 Ok, if I huff it I could probably get it done this weekend, which means most likely I'll be distracted by other shiny things to do and not touch it.  But I could. Maybe.

I also, thanks to one of my knitting group people, ended up starting a dish towel that, due to the fact that I'm using scrap cotton, thought I ran out of the blue color, then found another fourth of a skein of it, is coming out just a little funky:

My only excuse for this project is that I can work on it on the subway, unlike the shawl.  That's what I'm going with.  But having a subway project, of course, didn't stop me from swatching for a pair of socks with some really, really brightly offensive yarn (that I bought at WEBS, because one of the things I did in this void was go on the annal WEBS trip (I'm one of the drivers; I kind of have to).  It turns out that between having moved my yarn stash recently and bringing my sister along, I spent way less money than usual (I got my sister to spend more than me, he he he. But she doesn't have a stash, so that made it easy).  That didn't stop me from buying a number of skeins of yarn, of course): 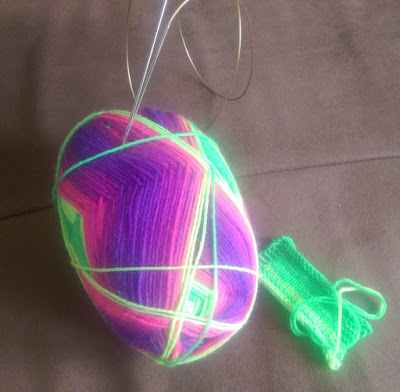 This is not my type of yarn.  That's because it's for my other sister, as she likes the loud bright colors. I'm planning Hanukkah presents early this year.

Also, I started swatching and doing the spreadsheet formulas for another sweater design. Because it's about time I started attempting a design again; I have way too many of them in my head, with the yarn ready to go as well, and no other work done on them.  It doesn't help that I have a bit of a deadline to my free time (well, what little I have left after being in the middle of selling a house and going a little crazy at work).  I'm going for my master's starting this month, and will be in class four evenings a week, plus using my weekends to do school work. This should be fun.

But maybe I can get that all but started (I still need to order the needles for it because I need a different length circular; unfortunately a thought that only occurred to me after I attempted to create a sheet for my size to start it). Oh, who am I kidding, I'll spend this weekend (of which I'm taking off two days so it's a four day weekend) mostly playing Skyrim or XCOM or maybe even Karmaflow, if I feel like frustrating myself.  Or actually cleaning the apartment. Or doing the thousand other things I should be doing that I didn't do yet because last week, I took a little vacation:

Of course, got very little knitting done there either.  There was too much to do, and any downtime we usually spent playing board and card games.  I did, however, start teaching my boyfriend to knit. He's now attempting a one colored version of the dishcloth I'm doing, because it's only knit and slip stitches, it's a little more complicated than garter stitch, and I haven't taught him the purl stitch yet:


We'll see how this goes.