Oops, I Did It Again

Since I can't really do the shawl anywhere but at home, I've been knitting a sock for my subway project:


It's not a bad pattern, and I love the design and the yarn.  Might have had to rip it out twice due to issues, but none of that was the pattern's fault (first time I screwed up the chart, the second I realized I had to make it a bit smaller to fit...well, ok, one size fits all isn't for socks, so that may be the pattern's fault). This is my first time doing toe up socks, and therefore the style of heel involved is completely new to me: 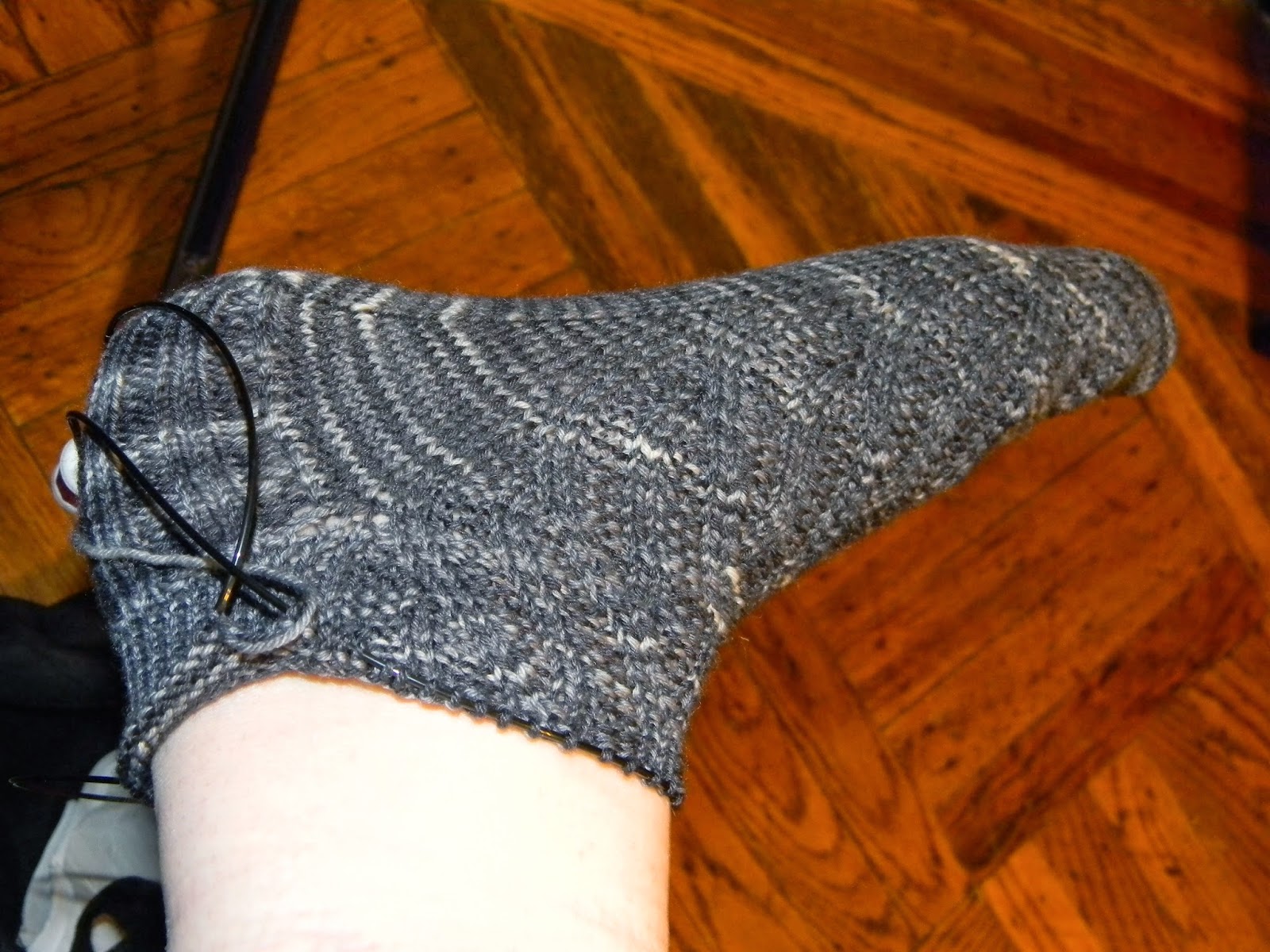 I'm not a fan of being blind to the pattern, but having got past the heel now, it seems like it'll work out, and at least now I understand how this heel works.  Well, I'm ok mainly because according to the swatch, this yarn will grow a bit so being slightly small for my foot is a good thing.  But I'll take it.

However, that's not what I'm hear to talk about.

I'm here to talk about another needle.  My brand new Knitter's Pride Karbonz circulars, size 0 since I tend to do a lot of socks on 0s.  I bought them a bit less than a month ago when my knit group made their what's turning out to be annual trip to WEBS.  I was being splurge-y, and since I tried out the Karbonz at VOGUEknitting Live, I've wanted to get one.  So I did.

I like them.  As someone who favors metal needles, I still liked them.  They're not as slick as other metals, but still slick enough for my comfort without feeling like I fighting it too much, yet not so slick it feels like you're slightly out of control. They feel solid, but not heavy.  It's an interesting sensation, and I find them very usable.

So when I had to rip out my sock the first time, I switched to my new needles as was happy.  Until today.  Because I broke them: 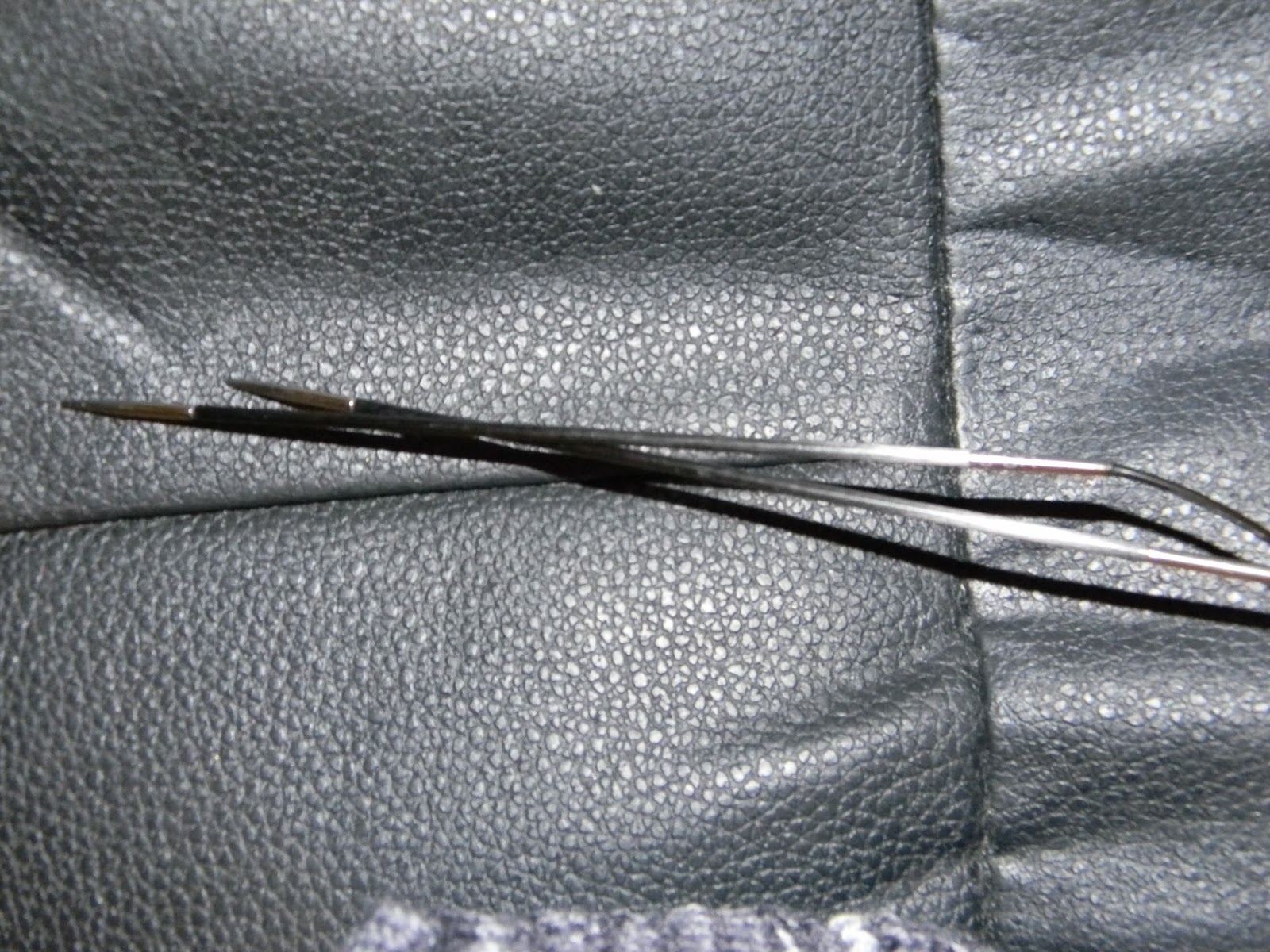 Oh, they don't seem broken, unlike the last needle I broke (also on a sock, of course).  But they are broke.  You see in that picture up there that the tips aren't the carbon material but are metal?  Sepreate pieces of course. So, I was knitting along on the subway into work today, only to have one of those tips dislodge just enough so that it wiggles back and forth with the slightest of pressure.  Including trying to pull a stitch back with it, because of course it was the side I was holding in my right hand. I managed to complete the row very carefully, then I put them away because I was afraid any more knitting would cause that tip to come off completely and anyway, it's not easy to knit with a tip that bends when put under the slightest of pressure.

Am I really that hard on my needles?  I mean, I'll entertain that thought because I know I'm a tighter, rougher knitter...it's why I prefer metal needles for most yarn.  Or just unlucky and got needle with an issue?

Anyway, there is a happy ending to this story.  I emailed WEBS and asked if they had a broken needle return-and-replace policy, because I couldn't find it on their site and, I mean, it's only been a month.  I was fully prepared to pay the shipping to send it back and have them send me a new one because it's still cheaper that way AND I won't have to deal with the switching needle gauge problem (because I do have a metal size 0 circular for socks here already).  They replied that they have a no-questions asked replacement policy on Knitter's Pride needles, and that they would send me a replacement right away.

Hopefully I don't break this one.  The only suck-y part right now is that I don't have a travel project to work on.  Unless I just finish this first sock with the metal needles.  How much could my gauge change for the upper part of a sock with a crazy design, anyway?
Posted by Unknown at 7:21 PM