The Importance of Dye Lots

This is why you buy enough yarn of the same dye lot (or at least visibly match it when you buy more than one dye lot):

Now, for this project I both knew this was going to happen (you don't buy yarn two years later expecting to match dye lots) and don't really care that it did (it's a couch wrap small blanket that will live in my apartment).  However, I still wasn't expecting the color to be that off.  This isn't just slightly different, this is whole 'nother color of blue different.

In other news, I finished the couch wrap I was making up the pattern for.  Which isn't a wrap.  It's not even a big shawl.  It's as big as the fleece blanket I was trying to replace.  Somewhere, I had a math fail when I calculated how many chains to do.  So when I get around to writing up this pattern, I have to re-do all my calculations so it is a couch wrap.  Since you got two patterns last week, I'm not in a rush now.  Especially since I now get to work on a sweater for myself: 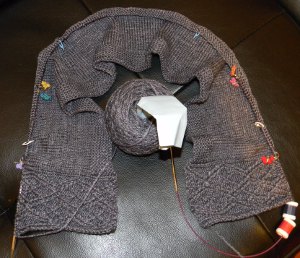 The pattern is the Professoressa Cardigan by Connie Chang Chinchino.  This will replace a store bought work cardigan I always wear (the temperature in my office is not consistent no matter what time of year it is).  It's been my plan to replace it for awhile, or just add some variety, but now it has to be done since the current one has a small hole in the sleeve.  Oye.

I'm using Blue Moon Fiber Arts' Woobu in, believe it or not, the Smoke on the Water colorway (look it up on their site.  It shows a dark purple color.  Mine is gray).  I just started this last week and I'm in love with this yarn already.  By far one of the best yarns I've work with, and hopefully it wears the same way.  Being that I found this yarn randomly at Rhinebeck, it was a good pick.

One point about the yarn though: I'm lucky I read up on it on Ravelry before starting this project.  All the comments were along the lines of 'this yarn rocks but my sweater grew'.  So I did a proper swatch and, yes, it grows and your gauge will change.  I'm using that to my advantage, actually.  Plan for it and you'll be fine.

I know it's pretty late for half the holidays now, but happy holidays everyone!
Posted by CompileYarn() at 7:39 PM