I hate rushing through projects.

Unfortunately, when one starts socks for Hanukkah less than a month before the holiday starts, it will end up being a rush job.  Well, at least for me.  I'm not the fastest knitter out there, so it takes me about a month to complete a pair of socks.  Especially ribbed socks with cables.

The good news is they did get done, even if it was at 2am last Sunday when I cast off the last toe, and I did have to cut out certain things I was planning to do.  Mainly, I'm very lucky the sock top was stretchy enough even with the provisional long-tail cast.  And that the yarn I used for the cast-on matched the sock.  It let me just weave in the ends and call it a day without having to go back and pick up at the top.

It did leave me with left over yarn, though.  Boo.

Since it was a rush job, I didn't get any pictures of the finished socks before I gave them to my mom.  Hell, hey were still damp from the steam blocking job I did when I handed them over.  I just didn't have any more time before I left the house.

(Speaking of blocking, I did re-block Crazy Cable Blanket.  Though it turns out that my iron at my parents' house also had hard water dust in it...however, it wasn't as bad as mine.  Oh well.  Hopefully it stays blocked this time, but most likely I'll never know.)

Anyway, you would think I'd be smart and let that be the end of it, but no.  I had to decide to knit something for a gift swap. And not only that, I was designing it as well.

Let me go back to the beginning here.  I suck at buying presents, unless it's certain people in my family who I just get what they like. Despite this, I signed up for a gift swap where the recipient of said gifts didn't know who was giving it to them, I had a price limit, and all I had to go by was a set of answers to four questions. Hoo boy.

When thinking about what to get, I started settling on the idea of knitting something cheap and quick.  I had the favorite color of the recipient, and I had other ways of feeling out what they liked, knitting-wise.  What else was I going to do?  So I did a half-prototype where I took yarn out of my stash, found a pattern (which I had no intention using to make as the gift.  I don't know what I was thinking)...and ended up a day later with something else.  I basically went from this to this:

Yeah...my creative side took over there big time.  I was pretty much going on the fly; deciding what to do by row.  Oye.  The only thing that little exercise that took over when I was supposed to be knitting a pair of socks did was prove that I could knit a bulky yarn, small-sized cowl in a day.  Well, that and it gave me something to hand to my mom the first night of Hanukkah.

After that, I decided that I was going to take a trip to Purl Soho (which I'd never been to) on a day I took off for unrelated reasons and see if I could find a skein of yarn that worked.  I was then going to find a store in the Fashion District and get buttons (which...holy shit why didn't I figure this out earlier?  The first store I walked into had tons and tons of buttons!  They had the perfect buttons for both cowls!  I need to go to the Fashion District more often).  After I got materials, I was going to sit down, change the pattern a bit on the cowl I did on the fly, and have four days to get it done.  Except that I was still working on the socks 'til Sunday, which left me with two days instead.

Not deterred and with a cable pattern I came up with Friday night,  I calculated how many stitches I needed to cast on and started in the car on the way to a relative's house.  I promptly screwed up on said math and had to re-start during the same ride.  No matter; at said relative's house, I was able to get half-way through the cowl while watching the Jets game (yeah, yeah, I know, 'Jets suck' and all of that.  Still a fan, though).  Got close to done on the way back to my apartment, and finished the knitting Sunday night (and managed to write the pattern down, even though I wasn't 100% happy with the design.  Not bad, but not amazing).

'Yes!' I thought, 'I'll just block it, sew on the buttons Monday night, and it'll be done by Tuesday!'

Except one little thing I didn't do. I never saved and blocked the swatches I had done Friday night...no time and needed the yarn, you see.  So when I wet the yarn, I wasn't expecting it to go all limp and crappy-looking like it did.  It looked horrible.  You could see through the thing, that's how loose the stitches were.  Where I had joined in the initial round looked like it was going to come apart any second.  It had no structure at all.  There was no way I could give that away.

Now, I'm thinking: 'Crap, I screwed.  I have to knit another one!'  So I did.  Except I changed several things, including the cable (which I again designed partly on the fly).  I knit on the subway, on my lunch break, at home Monday night.  At 10pm, I was done (and had documented it as well).  I steamed blocked it this time, created the buttonhole loops and sewed on the buttons , and got this:

Its a small cowl.  A neck warmer, if you will.  But I like it,  and I had my gift and enough notes to write up a new pattern (though said pattern isn't done yet because I managed to get a cold yesterday and didn't feel like it.  I'll do it this weekend).

Oh, and the recipient?  Loved it.  I guess I can get it right sometimes.

As for the crappy cowl...well, that has a happy ending as well.  See, Tuesday night I looked at it again after it had dried a bit and it was now just fine.  It was a tad looser than I planned, but it was not too floppy or crappy looking anymore. So I sewed some snaps in it to shut it (as I didn't have buttons anymore) and here it is: 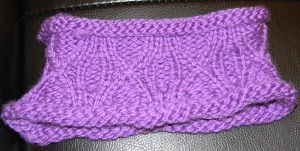 Another usable cowl.  Which I'll never use, so I have to figure out who to pawn it off on.  This pattern will also be written up and posted this weekend.  I figured that maybe someone else would like it more than I do.

Not bad for series of rush jobs.  I still don't like to do things this way, though.
Posted by CompileYarn() at 8:20 PM