How Not to Wind a Hank, with Some Reflections on Designing

So, this weekend, I didn't get much knitting stuff done.  Did a couple of rows on Crazy Cable Blanket, worked on a couple of squares (partly while waiting in a waiting room; partly during the Super Bowl, though I didn't get nearly as much done during the Super Bowl as I thought I would.  Something about being at a party and being from NY, that kind of thing).  Oh, and decided I was going to swatch for this baby sweater/shirt/whatever that I can't really decide what I want it to look like, let alone actually sit down and do the math.  But anyway, that little side journey was thrawted by one of the hanks of cotton.  You see, I had these hanks: 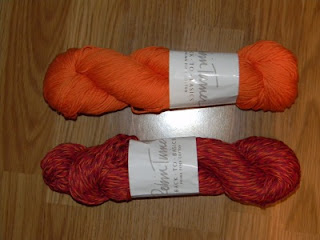 And one, once a swift and ball winder were utalized, quickly became this: 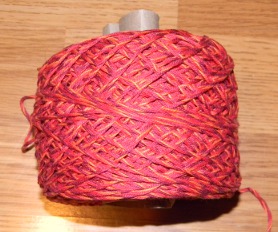 However, the second hank quickly became this:

Yep.  A big, steaming pile of yarn mess.  Why did it become such a mess?  Well, whoever wound the hank up did a shitty job.  Both ends of the hank were tangled up with the other strands of the hank, making winding off a swift impossible.  I tried.  For awhile, I was weaving the ball winder in and out of the hank on the swift when needed.  Then, I got to a point where the space the yarn went through was not and could never be big enough for the ball winder to go through.  So, I took the partial cake of yarn off the winder, tried winding it by hand off the hank, watched the partial cake start to disintegrate while the hank tangles became more numerous, and therefore got frustrated and took the hank off the swift.  Which meant that it disintegrated into the mess in the picture above.  And that's after I spent an hour attempting to untangle it.

Ug, how hard it is to wind a hank, people?  Big circle of yarn.  Really now.  The last time I had this issue was also a hank of cotton, too.  Different company though.

I finally did get it untangled and wound up into a non-disintegrating yarn cake, though it took me at least two hours to do it, split across two days.  Which meant I got no swatching done.  Oye.

Of course, the whole swatching and knitting of this yarn is another issue.  I want to create the pattern for this baby sweater/cardigan/whatever myself and write it down.  I have some ideas, and some constraints (needs to be short-sleeved, gender-neutral, and I only have one hank of each color plus some black cotton from another FO), and no idea how the variegated yarn knits up, which is a problem I need to fix.  But what this also means is that I have to sit down, do the math for whatever I design (which will probably be way too complicated and will therefore have to be toned down), knit it, hack it, fix my math, and then figure out how to size it.  I've never done a sweater pattern before (well, I tried once, but while I did get a FO out of it, I did not get anything I liked or useful to write a pattern up with).  I have 'till June for the FO.

Which brings me to another mistake of mine that I realized somewhat recently.  You see, when I first started writing my patterns down (back when I just crocheted), I thought that designers usually designed while knitting/crocheting, wrote down what they did, and then released it into the world.  So that's what I did, both successfully and not.  I BS'ed a pattern while I created it, tried to keep track of what I was doing and not do anything too crazy,  made it pretty and posted it.

Well, except that's not how it works in the real world.  Most designers write the whole pattern first, or at least most of it.  And, there are designers out there that never make the patterns they write.  They write the pattern, and then send it off to be tested by other knitters/crocheters.  This blew my mind.  Really?  You can design something before you make it?  How do you know it's going to work, or what it's going to look like?

Then I actually thought about it, and realized that I'm an idiot.  Of course you can write a pattern before you make it.  It's like writing pseudo-code or planning out a program to the function level.  If you know what you're working in and what it's supposed to do, you should know what's possible or not, and therefore write fine code or patterns without ever executing it or making the pattern.  Theory and thought will show you what will work or not.

Of course...I also plan a lot of my programs partly on the fly.  It's just the way I think; I need to see it working to really say 'yeah, this works'.  Now, don't get me wrong, I do plan the logic flow, gather requirements, do mockups of screens, and all the other fun planning steps that come with coding.  But I tend to plan the actual structure and/or some details of the program itself by just coding it and getting it up and running.  So is it really surprising that, knowing no designers or anything about the process, that's how I was designing as well?

Except that, why I don't mind coding this way (to a point), on-the-fly planning in yarn craft is way more annoying.  See, to change something in code can be very simple (well, I should say in the environments and languages I currently work in).  You go, you figure out what you want, you write it (or copy and paste it), and you run it.  All the rest of the code you've written and tested is still there.  To change something while making it in yarn usually ends up requiring scrapping part of the project.  Or the whole project.  Or even the yarn you bought for the project.  You can't reuse stitches you knitted after the change, at least not usually.  And a different construction?  You can't just copy and paste what you want and piece it back together, you know.

Hence, I'm planning on writing down most of this baby sweater/cardigan/whatever pattern before I attempt to knit it.  I'll swatch to see what color and stitch combinations look good, I'll do the math and write down everything.  Sure, something will change after I start it.  But I won't be doing half-assed math calculations that lead to a too-wide neckline like my last sweater project.  Or a too-loose gauge that just didn't work, that I didn't bother pulling out because that meant losing everything I'd done before.

Famous last words, I know.
Posted by CompileYarn() at 8:50 PM