Yarn Craft in Literature, or In Which I've Been Reading Tolstoy Instead of Coming Up with Good Blog Posts

Because I have nothing right now other than some pattern math and a couple of semi-defunct swatches for a certain baby sweater: 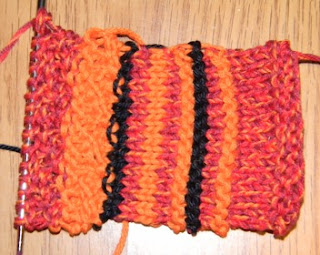 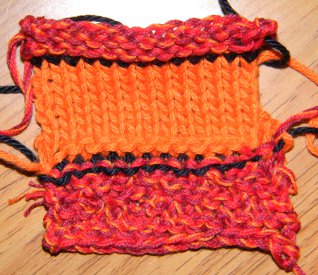 ...rather expensive yarn I bought because I walked into a new yarn shop looking for buttons, couldn't find buttons I liked, and then felt bad: 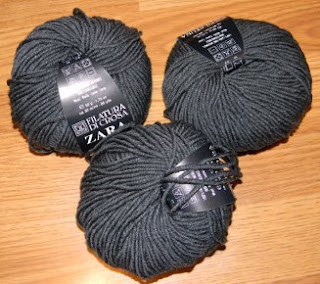 ....a story on how I managed to screw up the order of colors on one of my afghan squares because I didn't bother writing it down before going out and attending a knitting meetup, as well as my main idea of ordering these squares, which would mean I need to keep color orders the same: 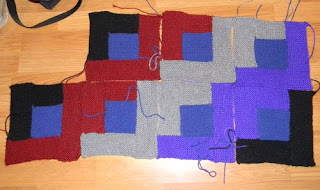 ...and very little actual knitting done, I'm going to instead mention that I've also been on a Tolstoy kick in books recently.  Being that I'm supposed to be saving money and own a Kindle (and have yet to claim the library card that got sent to my parent's house by mistake), I've been hunting around Project Gutenberg for free books to read.  If you don't know what Project Gutenberg is, click that link right now. You don't even need to own a e-reader to read these books; you can read them straight on the computer (this presumes, of course, that you can deal reading a book on a backlit screen. Personally, I can't stand reading long books and certain other things on a backlit screen, hence I was a semi-early adapter for an e-reader).

Anyway, to get back on point, I finished Anna Karenina recently (in two weeks. Yes, I can read fast when I actually decide to sit down and read).  I'm now reading War and Peace (because I'm nuts).

I really, really, recommend reading Anna Karenina.  It has a surprisingly addicting series of plots, despite the fact that they all meander.  Maybe has something to do with the fact that it's like reading a train wreck; you'll be horrified by all the characters' actions, but you just can't look away.  However, I will admit that I've never minded long wandering books as long as the wandering parts are interesting, well-written, and establish character, while I know others who hate any meandering. Tolstoy was the definition for the former on this site, so you have been warned.  War and Peace, on the other hand, I haven't read enough of it to pass opinion yet.  So far, while it has very little semblance of plot line, the characters and their antics have been amusing me.

You may be wondering what this has to do with yarn craft.  Well, one of the many details that pop up in these books is characters doing yarn crafts.  I found this more amusing than I should have.  After all, these books do take place in 19-century Russia, so of course people are crafting.  But it's how it's presented, and sometimes even who Tolstoy bothers to mention is doing such a thing, that makes it interesting.  That, and I know next to nothing on historical yarn craft, so all these references are interesting from that standpoint.  Anyway, I will provide quotes (though not page numbers since this is on a Kindle, sorry. I'll give location numbers for any other Kindle users out there, though note, however, that 1) I own the first version of the Kindle 2 (though if you have the newer Kindle Keyboard, the screen size is the same...and holy shit, you can now get it for less than $100. Can you believe I paid $320 for mine?), and 2) the version of Anna Karenina I have is the free Amazon download, but the version of War and Peace is this Project Gutenberg version.  There is a Project Gutenberg version of Anna Karenina as well).

First, you have your standard women knitting stuff, along with a case of a man not getting it.  However, I'll mention here that I think the male character not getting it is more due to the type of character he was. If you know Anna Karenina, the following quotes come from the part where preparations are being made for Kitty's and Levin's first baby, for which Kitty and her relations work and Levin doesn't want to get it.  So, yep, baby knitting:


"On the terrace were assembled all the ladies of the party. They always liked sitting there, after dinner, and that day they had work to do there too. Beside the sewing and knitting of baby clothes, with which all of them were busy..." (8996).

"She [Kitty] was sitting up in bed, holding some knitting, which she had been busy upon during the last few days." (11434)

"Kitty was walking about knitting rapidly and giving directions" (11453).

I should note that the last two come from the part where Kitty is going into labor, no less.  Guess the knitting relaxes her, as this is the first time in the book Tolstoy mentions Kitty knitting directly.  Before this, she was always working on a type of lacework.

Beyond baby knitting, you also have a governess of Anna Karenina's doing some pretty standard knitting:


"The English governess...was sitting near the boy knitting a shawl" (6858)

As well as a main character (Dolly) consolidating herself with some knitting early in the novel:


"...she [Dolly] took up here work, a coverlet she had long been making.  She always set to work on it at depressed moments, and now she knitted at it nervously, twitching her fingers and counting the stitches" (1052).

However, they're not the only people knitting in Tolstoy's works.  In War and Peace, you have a man (granted, he was a servant) knitting:

Though I have yet to quite get what Anna is doing here with it (for background, this is the same crochet work as the above quote):


"...pulled the hook at last out of the crochet work, and rapidly, with the help of her forefinger, began working loop after loop of the wool that was dazzling white in the lamplight, while the slender wrist moved swiftly, nervously in the embroidered cuff" (5885).

So, now that I'm done whoring out literary references, I'll go back to this baby sweater now.
Posted by CompileYarn() at 12:21 PM