In Which I Learn the Importance of Researching Before Pattern Writing, and Get Addicted to Garter Stitch

So, my plans once again get made, and the fall into the dust.  I should be working on either the baby sweater to be made with my new yarn, or the crazy cable blanket, but I'm not.  Actually, I've managed to start another project in the meantime: 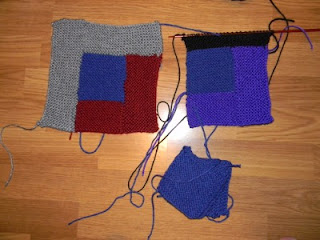 This is from a pattern in 60 Quick Baby Knits called "Log Cabin Afghan", except that I'm altering it.  The square is actually supposed to have two more blocks of color going around it, but I decided I didn't want to do that and stopped early (yes, I know that means more squares will have to be done.  But it also balances out color usage).  That, and since I'm using whatever yarn I have right now, which is mainly Caron Simply Soft with some Berocco Vintage for the middle square, the squares aren't all going to be the same color (though I haven't decided what to repeat or not yet, still thinking about it.  Also, I do not kid myself that at some point, more yarn will have to be bought to finish this).  As well, despite the pattern source, I doubt it's going to any baby.  My color scheme of worsted weight yarn in my stash isn't exactly baby friendly.  Thirdly, I really should learn to read patterns carefully before starting them.  You see the pile of center squares?  That's because I didn't realize that you didn't bind off on the first square, but kept knitting, and then turned.  I'm having to undo the bind off and then continue for all those squares because someone didn't follow instructions.

You would think I would have been driven mad by all the garter stitch done in those squares (and hell, I'm not even a big fan of garter stitch as a look), but I'm oddly addicted to it right now.  I guess my mind just needs something not complicated.  I've had better weeks.  At least it'll be a better project to work on during the Super Bowl.

In other news, I was pretty much done with the baby hat pattern I posted just now last week, except that then I actually bothered Googling 'Mistake Rib'.  You see, I learned a 1x1 version of mistake rib that wasn't reversible, leading me to decide to make a 'brim up' and a 'brim down' version of the pattern.  Then I found out that proper mistake rib is a reversible pattern.  Oops.  I could have saved my ass from having to do two hats (though doing the second hat reveled some other math-related mistakes in my pattern, so it still wasn't a waste of time).  However, changing it now would dictate a completely different pattern, as the math doesn't work out with my current stitch count.  So I apologize for that.  I could have made it easier, and I didn't.  I really should do my research before embarking on pattern writing wild goose chases.  It's because of this that I almost didn't post the pattern, thinking that it shows that I'm a bit of an idiot.  But I put a descent amount of work into it, so I decided to post it anyway.

However, between the pattern below, the squares, and some idea sketching for the baby sweater (which I'm most likely not going to use, but anyway), I haven't had time to do much else.  It's odd. I've gotten a lot done, yet it seems like I haven't done anything.  Oye.

Depressing post is depressing.  Will have to post later when I'm in a better mood.
Posted by CompileYarn() at 4:06 PM