I got nothing of value at the moment, but two other things:

I made this simple seed stitch cowl last December, out of a random ball of royal blue alpaca I picked up: 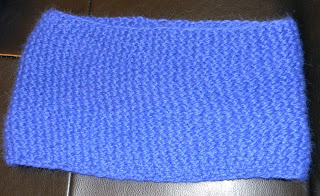 It didn't take me too long (I don't think I ever mentioned making it here), and despite my not-love for cowls, I started wearing it all the time.  Since I wear it all the time, I went out last Friday with it...and promptly managed to misplace it in a bar. When I got to the bar, I know I put it with my coat, and I thought I stuffed it in my coat sleeve, but it wasn't there or anywhere nearby when I went to move the coat, oh I don't know, maybe forty minutes later.

I think this is the first time I've managed to lose on of my projects.  Well, at least ones that weren't crappy that I didn't care about. And it's not like it'll be hard to make another.  I just got to go spend $15 on another skein and re-do it.  But it wasn't in my plans, and I'm pissed off at myself, but what else is new?

The second is that I'm cheating on my yarn.  Oh, don't get me wrong, I've been knitting.  I finished the fingerless gloves I was working on a bit ago: 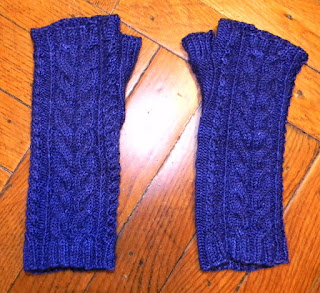 And I've been steadly working on my simple top-down raglan sweater (mostly on my morning commute, as I always get a seat on the subway then): 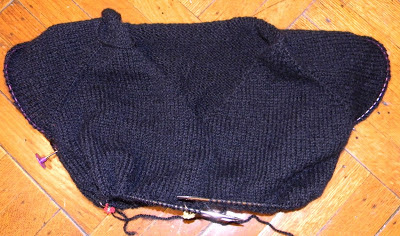 But that's not what I've been spending most of my time working on.  I'm sewing instead.  Despite the fact that I barely know how to sew and, oh yeah, don't own a sewing machine nor have the room or desire to get one. Because I'm ambivalent at best about sewing or any craft involving using a straight needle and tiny thread, and this isn't a long term new craft for me.

This seems out of the blue, but I've been planning this project for awhile now.  I'm hoping to go to a couple of SCA events this year, and I need better garb. However, any garb on the internet is either the same mass-produced inauthentic stuff (and I have enough of that) or really expensive for even the simplest of things (which I understand, but still).  Or actually, make that 'and really expensive (which I understand for the authentic stuff but otherwise, no, rip-off)'.  It came down to either spending hundreds of dollars on basic garb or making it myself for half that.  Given that currently I'm not a member and am only planning to do two weekend events...yeah.  I'm already going to be investing too much money in it because it is a big money sink (more than yarn craft), and that's even given the fact that I bum space in my sister's tent and camping supplies from my family.

To bring it back to yarn craft, I feel like the whole falling in head first with the knitting and crochet in the last couple of years has made me infinitely more patient at making stuff (well, may also just be me getting older, but whatever).  Four or five years ago I wouldn't be able to spend two months working on a sweater, no matter how much I liked the idea.  I just did that.  Of course, there's a limit, but the whole garb issue now falls on the 'screw it, I'll learn to make it' side.

So that's what I'm doing instead of blogging.  Maybe next week I'll get this thing back on topic.  Maybe.

Email ThisBlogThis!Share to TwitterShare to FacebookShare to Pinterest
Labels: cowl, fingerless gloves, garb, idiots can do it and I can't, knitting, SCA, seed-stitch cowl, sewing, should be yarn crafting, sweater, Yummy Mummy Wristwarmers