Well, that was a trip.  But I'm finally done: 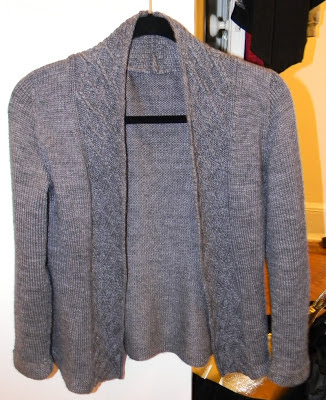 I don't know how I got it in my head that this would be a quick project.  Ha ha.  Even if I hadn't screwed up as much as I did or had been doing things I've never done before, it still wouldn't have been particularly quick. 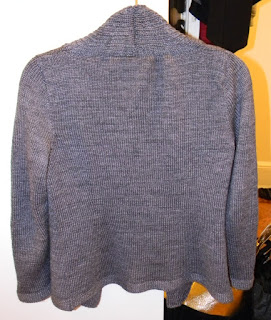 The Pattern
I had no issues with the pattern itself (Professoressa Cardigan from Textured Stitches).  It was clear and easy enough to figure out what was going on. No errors that I saw, which is good because I don't think I looked for errata either. Chart took a couple of read throughs to get, but that's because the symbols were different than the last several charts I'd done, not because the chart was unclear. Also, this is I think one of the first books I've seen with full, complete schematics.

While I did make a good number of changes, the only design oriented one was taking out the bell sleeves.  I almost left them there, because they do add some interest and I don't dislike them, but decided it would be easier to have it straight-sleeved so it would be plain enough to work with my whole work wardrobe (you see, when it comes to jacket-like items, I'm boring.  I'll wear the same cardigan/zip-up sweatshirt over everything.  I wore my last work cardigan almost every day of the year last year...which is probably why it got a hole).

All the other changes I made were because I'm [insert body issue here], and patterns are done in standard sizing.  This isn't a complaint; it's just a fact.  So I change it to fit me, because if I wanted a slightly off-fitting garment, I'd go buy it off the rack.

Some tips and tricks to keep in mind:
The changes I made (and how to do them) are below:
Some of the issues I had: 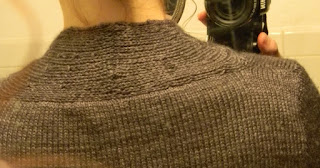 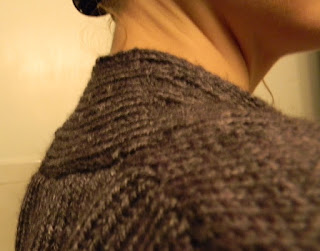 The Yarn
I used Blue Moon Fiber Arts Woobu, which is a Merino/Bamboo blend.  This is seriously one of the better yarns I've worked with, and it worked perfectly for this pattern. It's warm but with just enough sheen to make it look nice and professional.  It's soft but not overly so, and it can tolerate a good amount of frogging.  It's better after you wash it the first time.

I managed to split it while knitting, but at a much less rate than usual.  But I can split the best of yarns, so that means nothing.

However, this yarn grows after blocking.  Not just a little, but so much it will change your gauge and you NEED to take it into account.  Luckily, I checked out Ravelry first and saw other comments along the same lines, so I made a good sized gauge swatch and blocked it.  To give you an idea, when the swatch was unblocked, I was close to gauge using a size US6 needle.  After I blocked it, I was on gauge with the US5.  Any changes I made involving measurements were calculated using the blocked gauge.  Because I kept this in mind, it fits perfectly after blocking.  If I hadn't done that, I would have been screwed.

Conclusion
I might seem nuts with the notes here, but that's because if this wears out, I'm seriously considering making another one and I want to know what I did.  So, you know, the frogs don't take over my apartment again (my blocking boards on the other hand, they live here now).  I just wish it hadn't taken two months to do.

Now onto the next sweater...a simple top-down raglan.  Because I need a break.
Posted by CompileYarn() at 6:14 PM