First Socks and Too Many Other Projects

I broke my two project rule ages ago, and it's starting to bite me in the ass.

Let's see, I have multiple projects I'm trying to make for my Halloween costume (I originally was thinking of going as Ada Lovelace from this comic, but I decided just to do a generic Victorian/Steampunk thing because I didn't feel like explaining myself all night.  Yes, I'm a geek).  The first was fine, it was a crocheted top hat that took a weekend to make.  However, I then decided to make these spatterdashers (since I own no Victorian style boots), and oh boy.  Size 0 needles and worsted weight yarn.  My hands have never protested so much at a project. 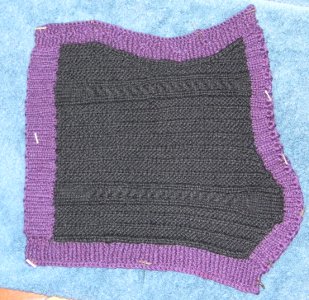 I've just gotten one done, but I still have to do the other.  Not counting buttons (which I don't own yet).

It wasn't helped by the fact that I did 8 extra rows by being completely oblivious as to what row I was on, which resulted in two extra decreases.  In order to hack a fix for that, I first did two increases on the last two rows instead of one, and then made the side bands bigger.  There were a lot of other minor mistakes, but it's for a costume.  I don't care.

I also decided that I really should knit some of the yarn I bought at Rhinebeck last year before Rhinebeck this year, which resulted in this: 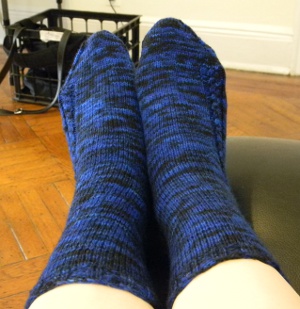 My first socks.  Actually, I ended up making three socks, because I messed up on the left (first) sock, but didn't realize it until I blocked it: 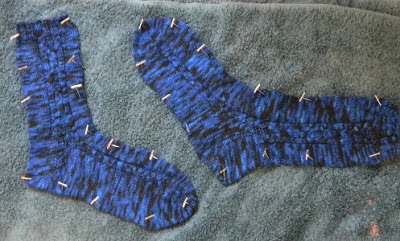 I know I was off a stitch on the cable pattern, but I have no clue how I ended up with a bigger ankle part.  Anyway, since I had tons of yarn left, I decided that I wanted to make another left sock so I had two great socks. 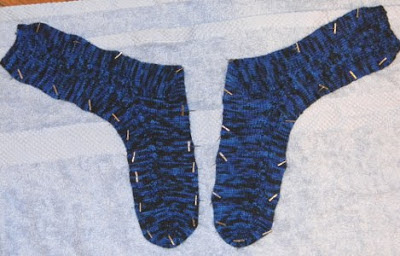 The only two things I would do differently is drop down a needle size and make them a little bit longer, because they're slightly tight lenghtwise (I made the right one based on how many repeats I did on the first left one, which was of course, bigger, though I didn't realize that then). But maybe that's because I'm so used to wearing big socks.  Hopefully they stretch a bit.

Honestly, for someone who doesn't care for socks (I'm the person who takes off their socks right after their shoes.  I either leave my shoes on or go barefoot.  I don't like walking around in socks), I really got into knitting them.  It's almost the perfect project to tote around; I can pick it up on the subway, during lunch at work, anytime.  Once I figured out the pattern (which is called Tea Time, and I had to pretty much interpret it since it's a obvious translation and there's information missing and I was Magic Looping while the instructions presume you're using DPNs), it was easy, but still required some thought.

I'm also still in love with this yarn.  Bought it for $21, but damn, worth it.  I'm almost afraid to wear these socks.

On the other hand, all that knitting has gotten me wanting to crochet again: 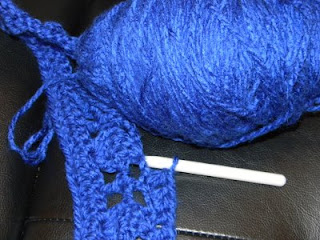 More on that at another time.

Yarn crafts has started taking over my life.  Oh well.
Posted by CompileYarn() at 7:04 PM