Bad things happen when you actually start to think about deadlines.  Sure, we've all had them, for knitting or otherwise.  Sure, they're sometimes a good thing.  But it's nice when you can take your time with a project as well.

The latter was my first approch to Crazy Cable Blanket.  You know, this one: 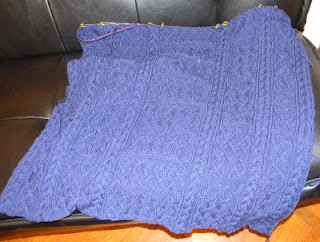 This was mostly to preserve my sanity.  Imagine setting a deadline on that sucker...at best, it would have been so far into the future it'd been useless.  Anyway, a week or so ago, I sat down and calculated around how much I needed to knit if I wanted to get it done by next Hanukkah (which is in the middle of December this year).  A rough estimate concluded that if I knit 4 rows a day, I can get it done by November (which would maybe give me time to smack a border on it.  Because all this time-sink of a blanket needs is more work done to it).

Four rows a day?  How hard is that?

Well, pretty hard, actually.  For starters, there are some days I'm just not really home until late, and I have to go to work the next morning, so forget about staying up to work on it.  Despite what I did yesterday, it's not really a good project to bring to a bar, nor to travel with in general.  Some days, I just have other crap to do, or I just don't want to sit down for an hour and a half and knit, or I get distracted by other things (like now).  Despite this, I'm sticking to my goal of four rows a day, even if in reality it's more like 14 to 16 rows a week (about 2.29 rows a day)  This is because this is the most I've worked on it, and even if I don't quite make my deadline of Hanukkah, I'm at least making visible progress.  Also, I really don't want to be talking about it a year from now.

Of course, attempting to speed things up a bit has it drawbacks.  Like noticing almost 75 rows later that you did this: 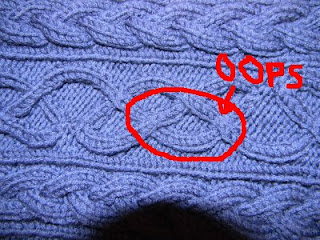 It figures.  Not only did I mis-cross the easiest cable in the blanket, I noticed it way after I did it.  Not like I'm going to frog half the blanket to fix it, so I'm pretty much stuck with this visible emblem of my stupidity.  Well...I did search for a way to fix it, and there happens to be another way.  However, I'm not so sure I want to try cutting just the right piece of yarn to re-cross the cables. Knowing me, I'll cut the wrong piece and ruin a year's worth of work.  A pre-teen won't care about a stupid mis-crossed cable and I'm just being anal, right?

P.S.: By the way, there should be no more interruptions in my life of the unplanned, life-taking-over, variety...at least for now.  That doesn't exclude laziness in posting, so I'll ask you to forgive me now for infrequent updates.