I have realized that I suck at 1x1 ribbing. I should have noticed this when I did it at the bottom of the sweater: 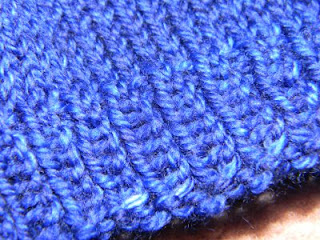 I should have thought, hey, this isn't good, I need to learn to fix this.  But no, I conveniently forgot that the bust area of the Milk Maiden sweater is 1x1 ribbing as well.  And when I actually got to that part of the pattern, I forgot that my 1x1 ribbing sucks. So I began ribbing, only to find out that, yeah, having gaping stitches is not conducive to the bust area of a sweater.

So I pulled out 6 rows, and tried again.  I tried twisting the rib, but that just creates huge gaping holes in between the stitches.  I tried twisting the knit stitches only, but that leaves gaping purl stitches.  I tried loosing my tension (this seems counter-intuitive, but according to what I read, trying to pull your stitches tighter makes gaping ribbing worse), but it didn't work either.  I've pulled this part of the sweater out three times already, and I've made no progress since Tuesday (though crowded buses and the idiot that sat next to me with a huge duffel bag in his lap that took up half my seat space didn't help either).

Now I just don't know what to do, other than change it to a 2x2 rib, since I magically don't have this issue when I do any other multiple of ribbing. It'll also mean the bottom won't match, which I'm fine with.  As long as I do the sleeves the same way, I think it'll work.  But I rather do it right.  How the hell do I do 1x1 ribbing without gaping holes?
Posted by CompileYarn() at 1:29 PM

Email ThisBlogThis!Share to TwitterShare to FacebookShare to Pinterest
Labels: current projects, idiots can do it and I can't, knitting, learning to knit, milk maiden, mistakes, ribbing, sweater