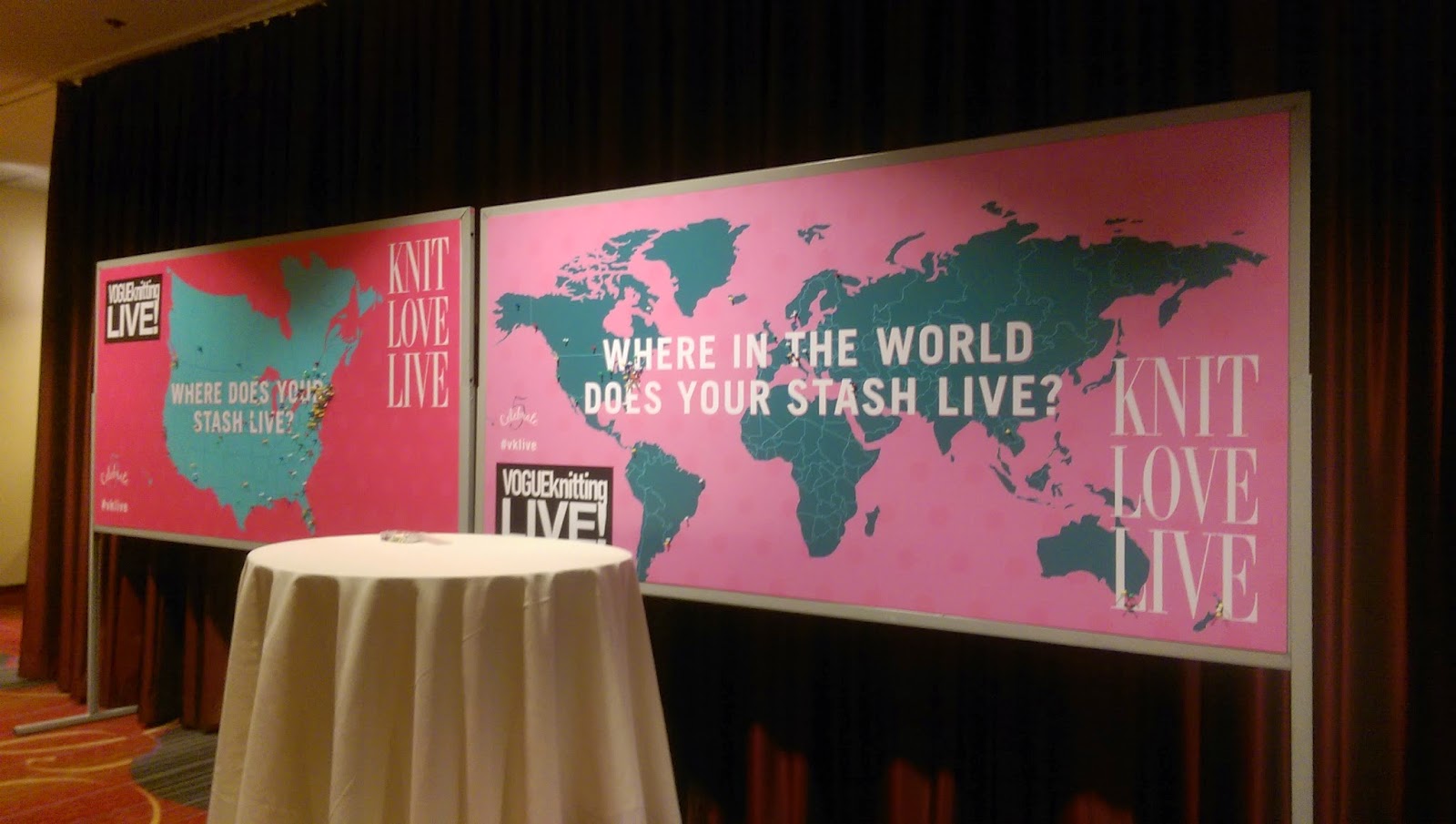 Oh look, I did make it to VogueKnitting Live.  Barely.  Only because even though everything goes wrong the weekend you plan to do something fun (and by everything I mean a burst pipe flooding kitchen of the unoccupied house I'm responsible for), I had good relatives who stepped in and took care of the stuff someone had to be there for.  You know, so I wasn't out $100.  Instead, I spent more money.

Anyway, I'll make this shorter and sweeter than I usually do, in the interest of time (given I'm already late to this party).

In General
Two things worked in my favor this year: I noticed that they had the guide on their website (it was linked at the bottom of a copro-spam email from them. I was lucky I noticed it) and since Rhinebeck wasn't as awesome of a time as usually, for reasons completely unrelated to Rhinebeck, I said screw it and signed up for a class and went yarn-shopping.

So, since I saw the guide way ahead of time, I found out that yes, all the fashion shows were on Saturday again and I need to go early, which I did.  I actually went a bit too early; by the end of Saturday I was ready to leave and spent 30 minutes sitting on the floor waiting for my knit group. That didn't stop me from running around the marketplace on Sunday, of course.

The Class
This year I took my chances again and signed up for 'Knitting Bag of Tricks' taught by Patty Lyons.

It was way better than last year's class.  The instructor taught well, including taking into consideration what we wanted to learn, while keeping control of the class and not going off the rails.  While a couple of the tricks taught ended up not applying to me since the hack was 'knit combined' and I normally am a combination knitter, I learned several things I didn't even think of.  Like the fact that you can cast on purl-wise using long tail cast on.  Or twisting the back stitch of an standard k2tog or ssk makes it neater.  Also, it turns out that she's been teaching the whole Knitting by Structure concept I though I was clever in figuring out.  Guess I'm glad I didn't continue on with those posts (sorry).

I highly recommend this class, and I'm glad I just pony-ed up 90% of its cost instead of not bothering when the 50% coupon didn't show up.

Fashion Shows and the Panels
Having gone early for the fashion shows, I first was slightly disappointed. The first two shows I saw, Vogue Knitting and Classic Elite Yarns were pretty tame. Though Vogue Knitting did have these questionable items on display: 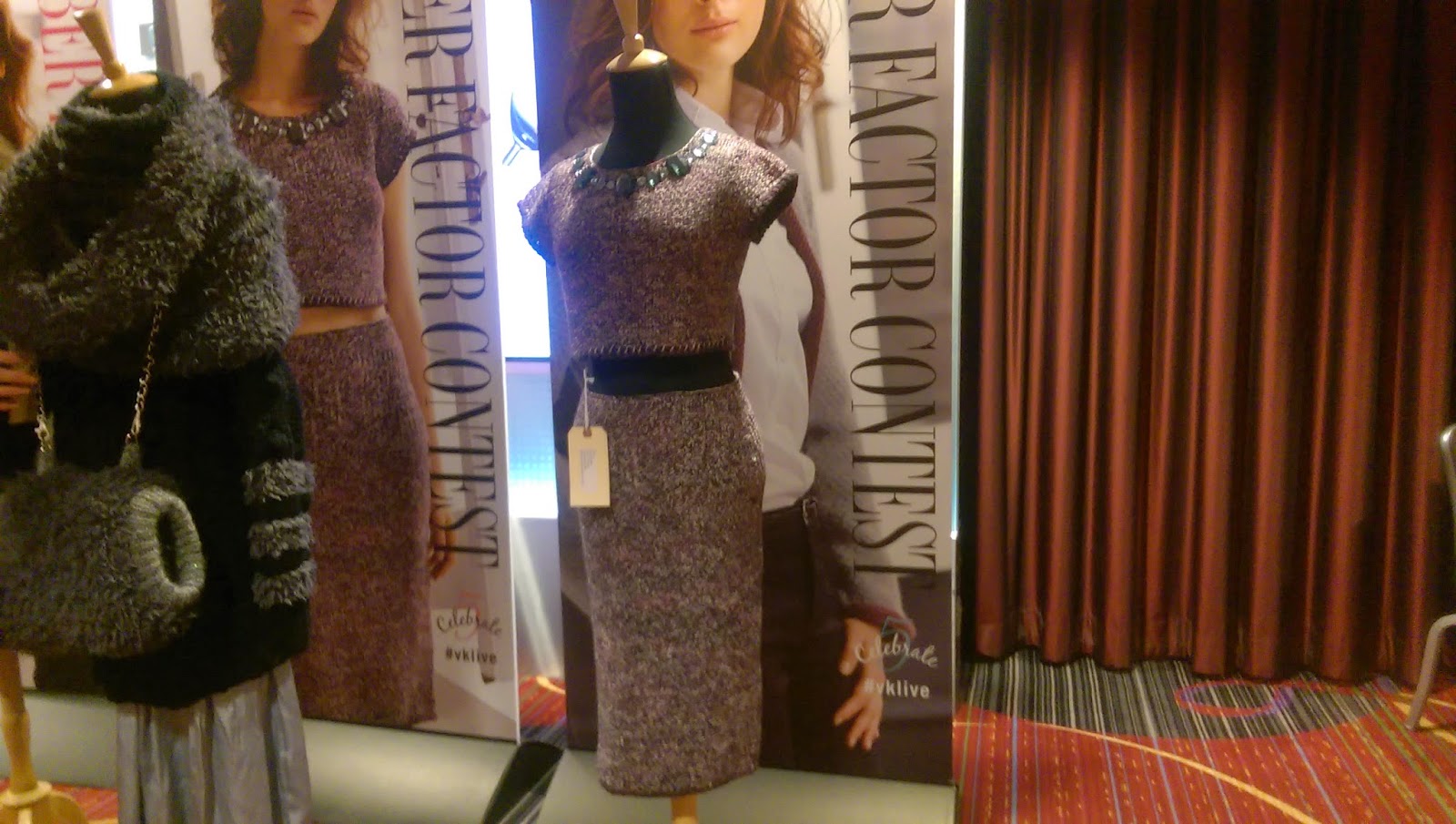 But anyway, as I got to the Rowan show, I looked at the pamphlet, realize it was full of standard boxy cut, cable laden sweaters, and skedaddled off to shop the marketplace.  While seeing patterns I either kind of like or or are so far in the box it's not funny modeled isn't bad, I really go for the WTF factor.  Which, when I came back in the middle of the Stephen & Steven fashion show I got it in spades: 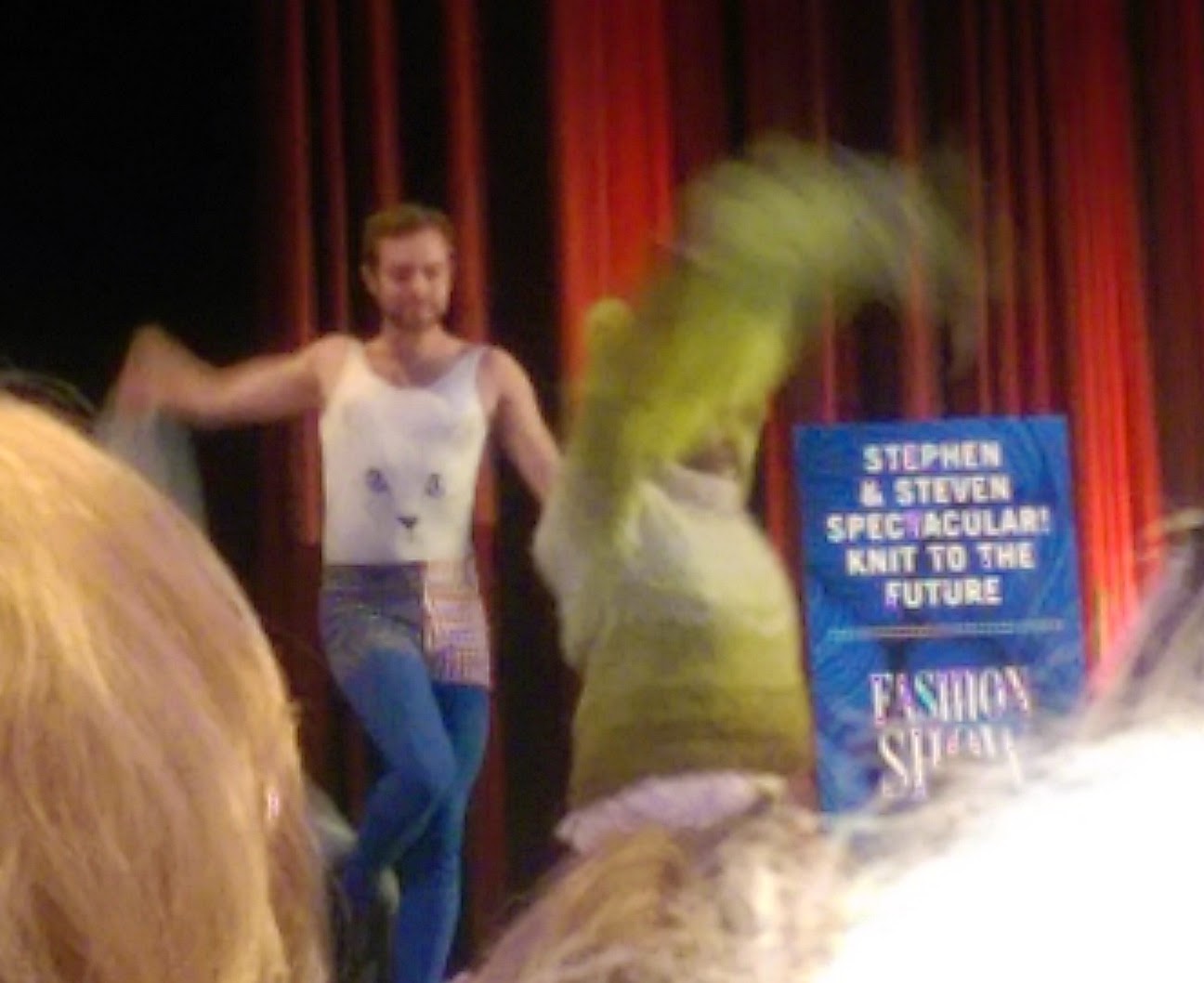 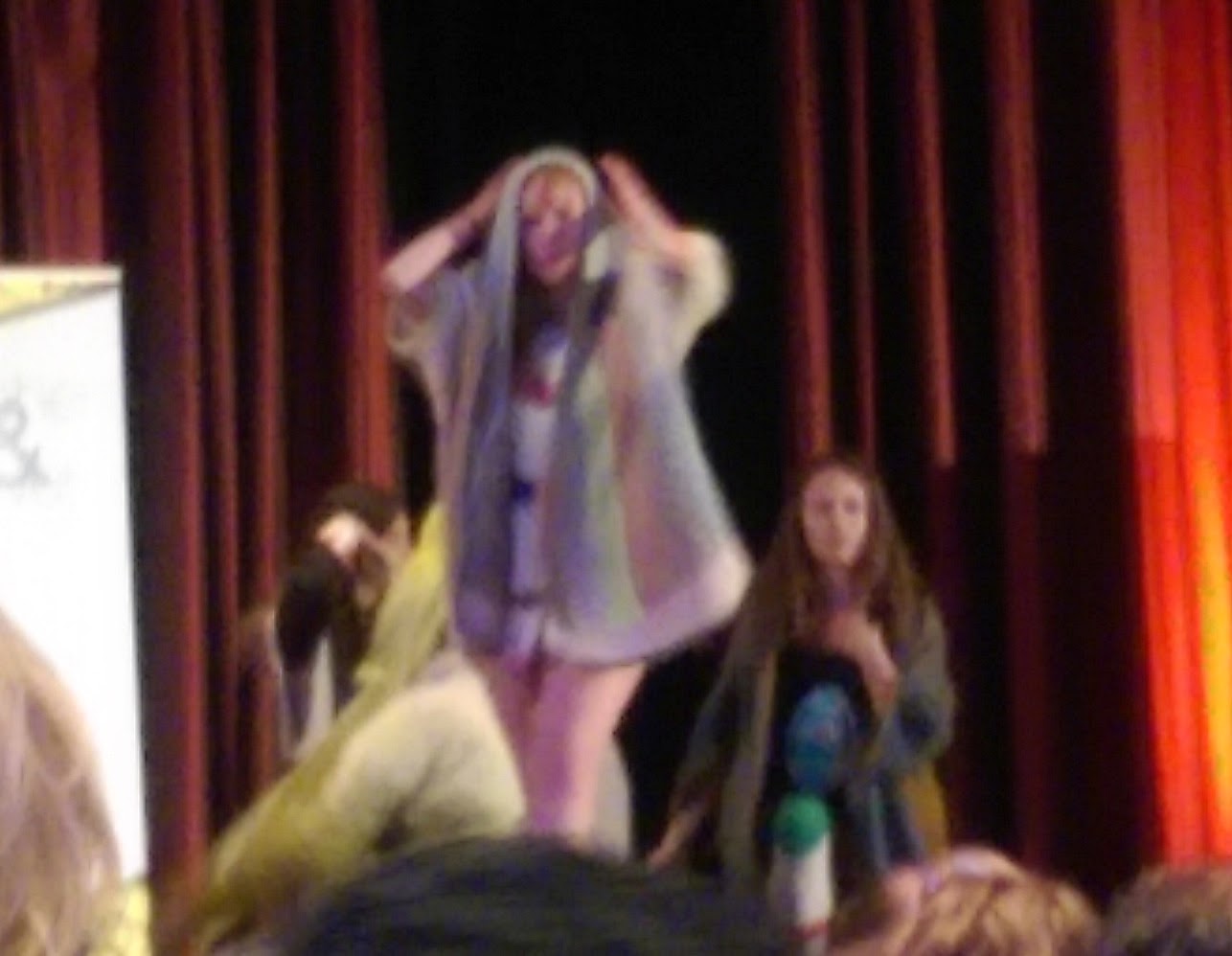 This show made up for the last three.  All the knitwear in that show was an insane conglomerate of brightly-colored sacks and scarves that served more purpose as decoration for the strutting and dancing models than anything resembling an actual outfit. Don't get me wrong, it was a fun spectacle.  But it wasn't really a knitwear showcase, and I have no clue what patterns were modeled. Maybe it's was better because it didn't pretend to be one.

Which leads me to the last fashion show I saw, Koigu.  This was the standard fashion show I'm used to.  Some stuff that's ok, some stuff that's trying to pass itself off as a wearable item but you still wonder what went through the designers mind when she came up with that.  Like the target vest: 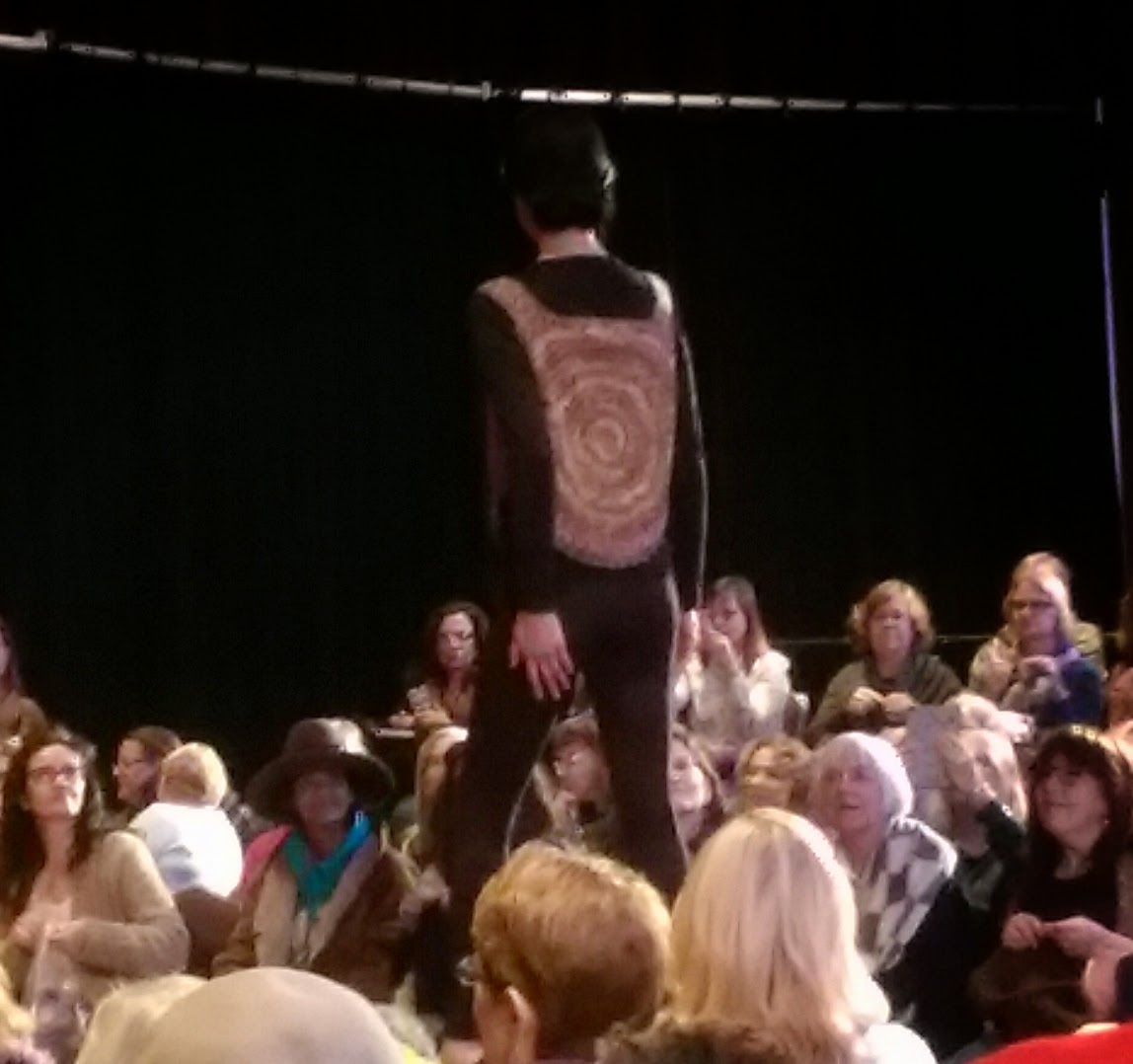 and the knitted yoga pants that don't even look flattering on the model, and the carpet sweater: 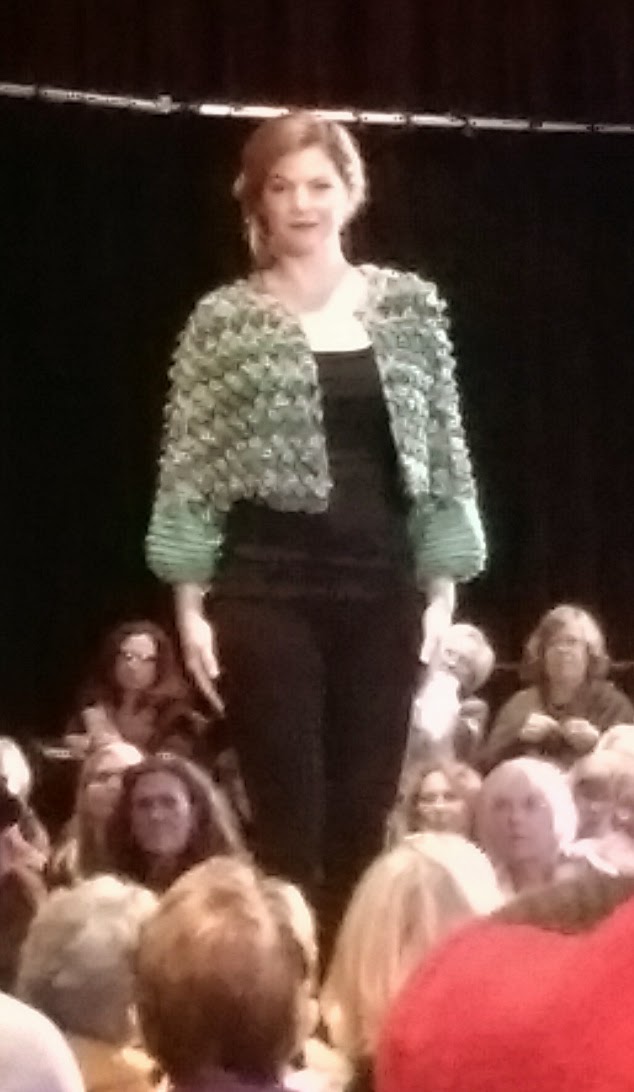 and, to top it off, your granny's doilies turned into a dress: 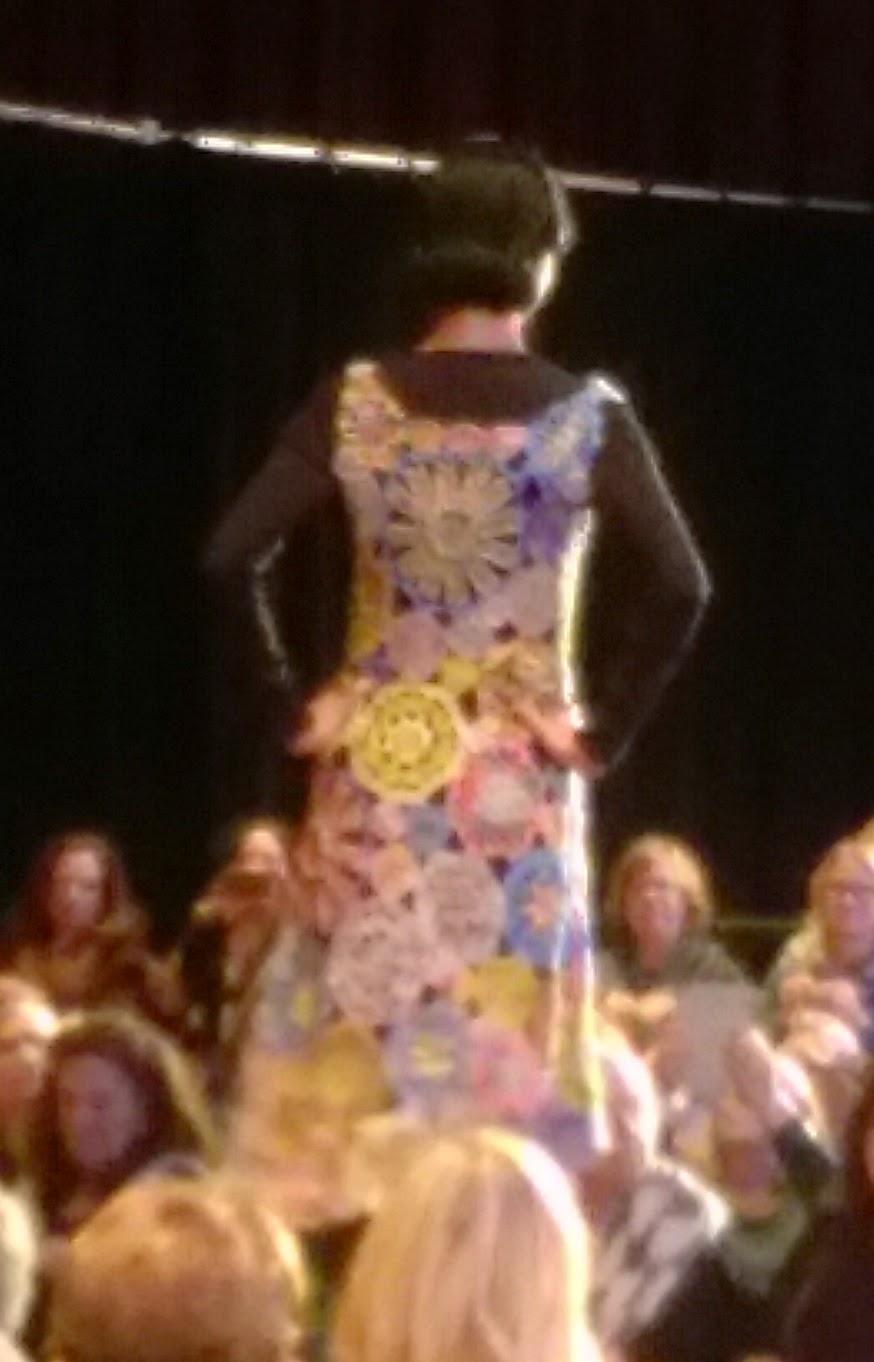 On Sunday, I did go to see a specific panel called 'Design is a Process', which was a good look into how different designers approach designing.  It really got me thinking about the designs I want to do, which is bad because I currently have absolutely no time to do them. But I bought the yarn for a couple anyway. Mission accomplished, VogueKnitting?

Purchases
So, yeah, I bought way too much yarn for myself.  And some yarn for my mother and the sister who got screwed dealing with the brunt of the burst pipe crisis while I frolicked here.  And some stitch markers. And a shawl pin.  Also, I have no pictures of any of it as I already packed it up (well, all but the skein I'm already using).

Let's just say that I'm set for awhile in yarn.  Which didn't stop me from ordering more two weekends later (one planned since I didn't find it at VogueKnitting, one because my original plan didn't work).

Conclusion
This year was a better year than last year as I got to see fashion shows and had a great class. And bought too much yarn, which is always fun.  Here's to next year, where hopefully I'm not ducking around making phone calls to the insurance company and relatives on top of everything.
Posted by Unknown at 10:05 PM