Trying Not to Get My Hopes Up

To start, Hanukkah technically starts on the 16th, but I'm not going to see my family until later, so I have a little more time than that (so, lets say I have about 10 days, max).  However, I also have a lot to do.  It is better place than I was expecting to be, but still not done, or close to it.  Believe it or not, this is the first time I've run the risk of missing a present deadline*.  I did get my brother's socks done at least:

However, my sister's socks were a bit more of a hassle than what I was expecting.  To give a bit of background, one of my sisters loves crazy and colorful socks.  You'd think she'd be the perfect person to knit socks for.  Nope.  She told me years ago when I started knitting that she doesn't want knit socks; she hates hand-made socks.  At the time I left that statement as is.

This year, at Rhinebeck (yes, I went.  No, I doubt I'll be doing a debrief this year), my sister finally explained why.  She associates hand-knit socks with the only pair of hand-made socks she's ever gotten -- a wonky pair of worsted-weight acrylic crochet socks my mom made when we were younger (and promptly had a crisis in confidence about, so she went back to making blankets).  After a discussion where I assured her that knitted socks were usually nothing like that and I could even use lighter yarn than normal 'sock weight', and yes I'd make sure they were the same size...she picked out a skein of lace weight sparkly yarn for me to make socks out of:

A couple of things turned out to be true about this yarn:
It's the magical gauge properties that got me the most.  There are very few patterns for lace-weight socks (gee, I wonder why). Which is normally fine, since as long as there's no crazy patterning in the sock, I can adjust  it to my gauge.  But when you pair that with magic gauge properties and patterns that have a large repeat...you end up ripping stuff out a lot.

You see, I first chose this pattern.  I thought it would work; even though it's a 16 stitch repeat, the math seemed to work out on it using the gauge I was getting in my swatch (which I even knit in the round!).  So I started.  I even tried a picot edge instead of the ribbing, thinking that would look cuter (my sister does cute). In the gauge I was using, the picot hem edging took forever and then I started on the pattern and...way too big.  It was too big for me, let alone my sister. Knowing I had to get this right and give socks that fit, I ripped out and dropped a repeat of the pattern.  I also did a k3, p2 ribbing instead.  That seemed nice, and a went for awhile with that, but the voice in my head kept nagging me about how it still felt too big.  It was ok for me, but would it stretch out too much because of the lace?  Would it grow when being worn? It was already on the edge of too big for my sister and...I gave up and ripped it out.  Due to the large repeat in the pattern, I really couldn't make it smaller comfortably. However, the pattern looked amazing in the yarn, I have to say, so I was sad it didn't work.

Since time was of the essence, I quickly went to my backup pattern, which is this one.  It seems to work, but I wasn't sure if I felt that way because the colors were similar and I could picture it in the yarn I had, or it would really work.  At least this kept the cute lace only on top, where fit wouldn't be as big of an issue. The ribbing would keep the rest snug.  So I went with the same stitch count I did for the smaller sock (which -1 ease, supposedly, though it doesn't look like it) and started.

Now I have a sock:

A couple of things about this pattern, though:

So...can I get it done?  Well, this is where I am now with the second one: 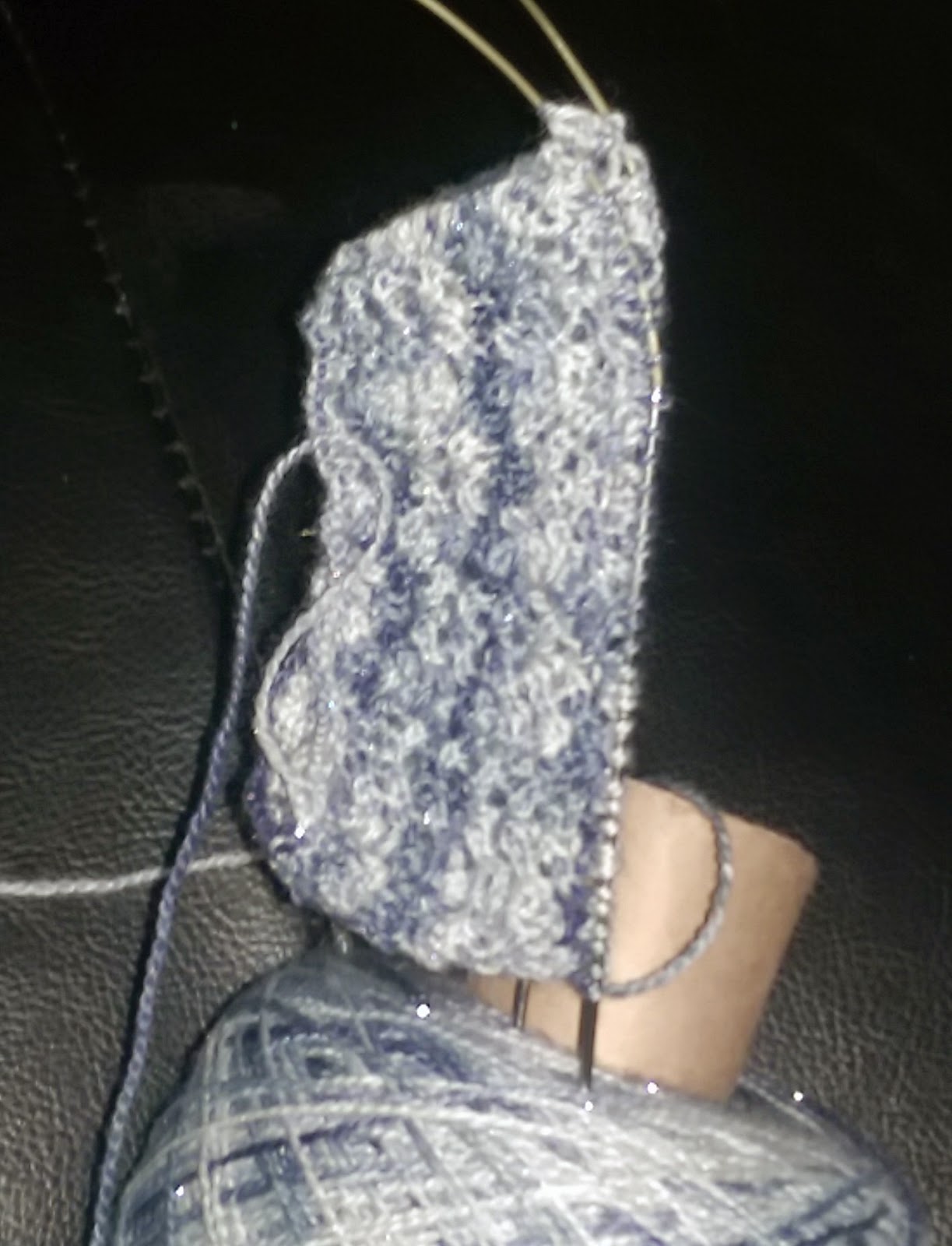 Almost done with the lace part.  So the possible answer is yes.  However, it will most likely be at a price: 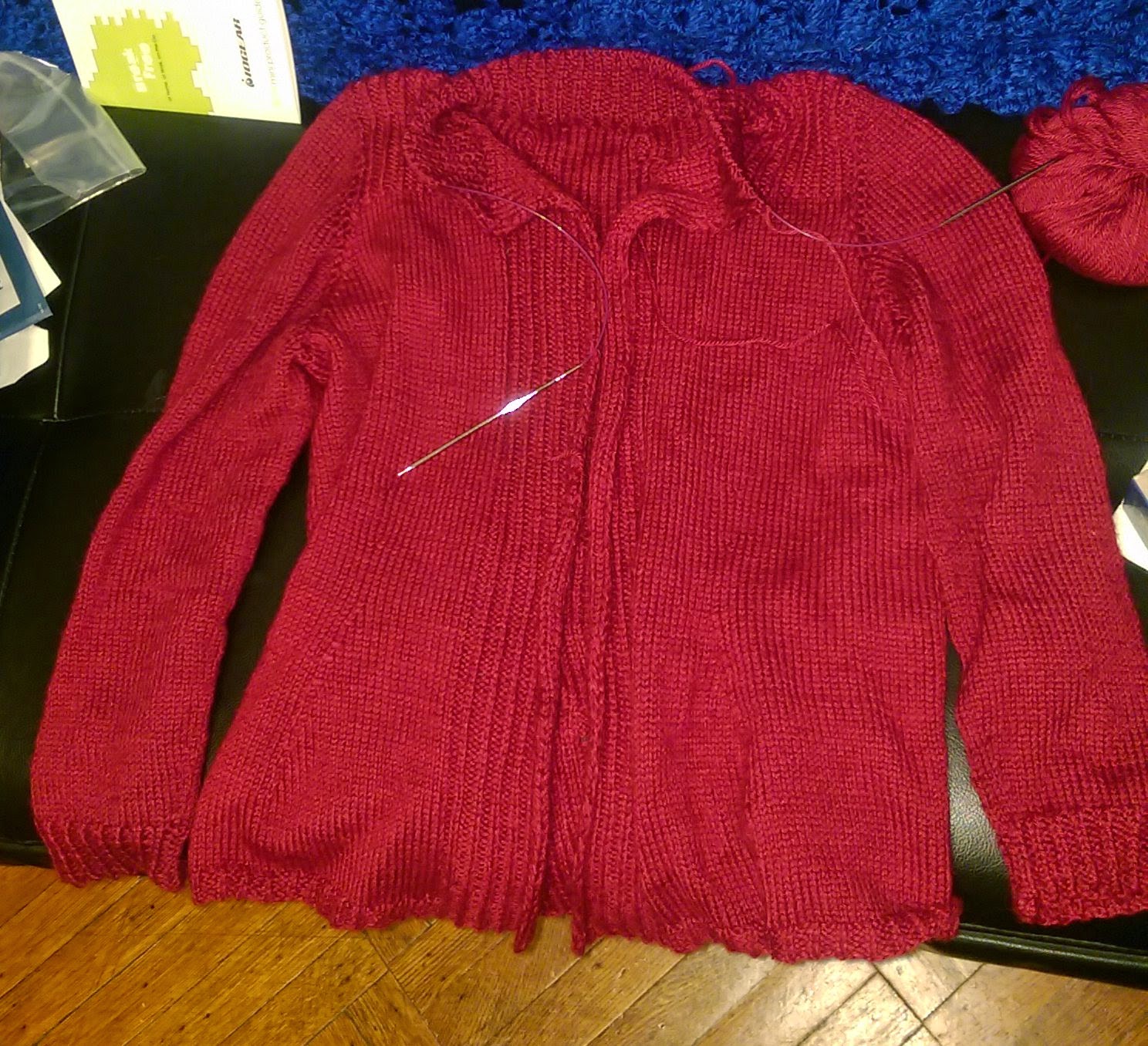 I still haven't finished my mom's sweater.  I've been working on that collar for more than a week, and by working I mean mostly ignoring it and working on the sock.  So the socks may get done, and the sweater may get done, but I don't know if both will get done in time...

Better start working on it then, I guess.

*[Wait, I take that back.  I did almost miss a deadline for presents before.  The first time I made my mom socks, I was quickly finishing them and blocking them before I left her house so she could have them during Hanukkah...and the only reason I succeeded was because the yarn I had used for the provisional cast on matched the sock yarn, so I wove in the ends and left it there instead of making the sock longer. The socks were wet when I left, but they were done!]