I have a problem I think most people have, but anyway it's a problem.  I seem to think there are more than 24 hours in a day.  And that within those 24 hours, I can be superwoman and accomplish all this stuff, despite the fact that I can't even get my ass moving too fast (like now).

In other words, it's October, and I of course have way too many projects going on.

It's a bit worse this year, though.  The first issue is that I decided to make almost everything for my Halloween costume this year, so not only am I knitting a couple of items (one done, the other in progress: 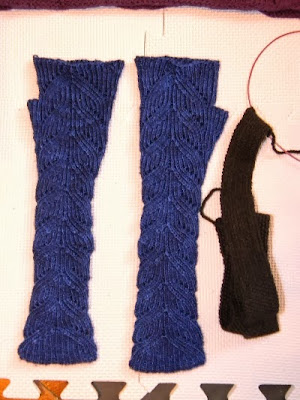 ), I'm sewing a dress.  Sewing takes up a lot more time since you can't just do 'a couple of rows' like in knitting, and is not portable.  At least I have a machine now:

The good thing about the sewing machine is that it does save time.  The bad thing about the sewing machine is then I think I can whip out a full dress in a couple of days.  No.  No, I can't.  Especially since I'm a novice, crappy seamstress.  I then think I can do more than I can within the three or so hours after work I have.  Except when I don't because I went out to dinner.

So that's taking away from my knitting time.  Other things taking away from my knitting time are the NYC Yarn Crawl (for which I bought more yarn I didn't need) and NYS Sheep and Wool (this weekend!  Buy more yarn I don't really need!), and concerts (I've got three shows this month I went/am going to), and my boyfriend (which is related to the concert and dinner thing, at least).  And I can't even be pissed about it; I enjoy it all. But when did I gain a life?  Actually...never mind that, when did I become an adult with all these adult responsibilities on top of it all (you know, because I also really need to cook two weeks worth of lunches, do laundry, and clean the bathroom today)?

The second (third?) issue is that not only am I working on things for Halloween, I had to start everything for Hanukkah this month as well, since the first night is the evening before Thanksgiving (American, so that would be late November).  Usually I get last-minute present plans around Rhinebeck, get the yarn there, and start early November.  It works if Hanukkah is at least mid-December (though I still run into scheduling issues).  It doesn't work this year.  The good thing is that I did plan ahead on some things, and I have one present done, and I got a jump start on my Mom's socks.  The bad thing is that I currently have two more projects (including the socks) going for that because why not start another knitted present while I'm working on one already:

Well...started being relative.  I did swatch and do some calculations for one of them so far.  The reddish one is the Jane Bennet socks from the Summer 2012 issue of Jane Austen Knits.  I didn't pick the pattern; I had my Mom search Ravelry for a sock pattern she liked, and made the yarn I'm using the surprise (last year, it was the other way: she knew what yarn I was using, but didn't really know the sock pattern until I had to try them on her....ok, so we don't really do the surprise thing here.  It's just that she hasn't seen the work in progress yet).

Oh, and I'm knitting another sock for a KAL: 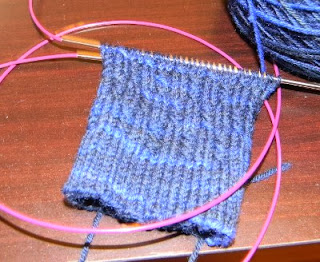 And don't even ask me about the tank pattern; I haven't started writing it yet.
Posted by CompileYarn() at 2:58 PM