I've gotten back into my pre-winter hat kick.  Yep, I know winter's coming when I start wanting to make hats.  I did this last year too, so I guess it's going to be a thing with me.  Winter's coming, time to make hats.

Last year, it was motivated by the fact that I had one slightly-too-big hat and scarf set, and another scarf.  I needed more hats and scarves so I didn't freeze my...um, head off when I started walking part of my commute.  This year, it's been quick presents.  Well, mostly.

I first blame my mother.  She wanted an alpaca hat for Hanukkah.  She sprung it on me a couple of months ago, so I was able to plan, get the yarn, and make the hat.  It also helped that she choose a really quick knit: 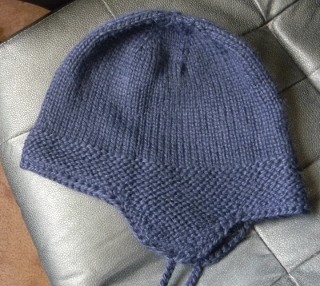 The pattern is the ever popular Thorpe, using Cascade Yarns Baby Alpaca Chunky, in a size large...which ended up being a little too big when I washed the hat.  Should have dropped down a needle size and/or done the medium so it wouldn't end up so floppy and loose.  Didn't think about the fact that I made it with alpaca, not wool.  It still works and fits well enough, though.

So, of course, that got me thinking and motivated, which is dangerous when you're making a KnitPicks order and you need to spend some more money to get free shipping.  You start thinking things like: 'Hey,  I can make a hat in less than a week...hey, why don't I make one for another relative I have no clue what I'm going to get for him, and oh, how about one for myself. ' I therefore present hat number one (the present): 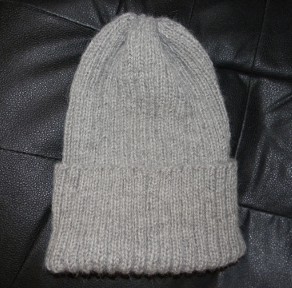 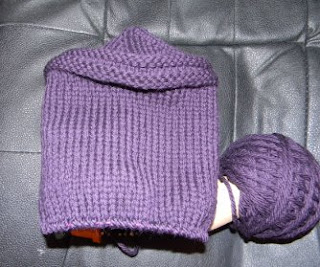 Hat number one is Lorne's Hat, from the ever-amusing Stephanie Pearl-McPhee.  Simple, straightfoward, nice hat pattern, if it wasn't for the 12in of ribbing in sports weight yarn it requires.  Good thing I like the look of the hat.  All that ribbing got tedious after awhile.  The yarn is KnitPicks Andean Treasure, which I have never used before nor read any reviews before getting.  It's not a bad yarn, but it's KnitPicks, so it's not the highest quality.  It sheds a bit when you're working with it.  However, it is also soft and pet-able, so it has that going for it.  Haven't introduced it to water yet, so I dunno what happens there (I also didn't swatch, so I'll have to make a swatch to test that bit out, he he).

Hat number two is a Bucket and Brims Hat.  I made this hat last year (you can see it here), and screwed it up a bit.  Not only was I still twisting all my knit stitches at the time, but I misinterpreted the pattern.  Which you need to do, since it's not the most straightforward pattern out there.  Doable, but not very clearly written.  It didn't stop me from wearing the first one, but I decided to try my hand at it again and see if I could make a better one.  The yarn is KnitPicks Wool of the Andes Bulky, which I decided to try just to see how the Wool of the Andes line is (the first one was made out of KnitPicks Swish Bulky, but they upped the price on that line and I was trying not to spend too much money).  Not overly impressed with the wool, but it's not bad.  It's not soft, but it's hearty and swishy...it's hard to explain.

This would have been the end of the KnitPicks yarn buying and hat making, except that I ran out of yarn for hat one before I was done (this is what happens when you pick the pattern out after you buy the yarn and don't look at the yardage required).  That's actually the only reason the second hat got started; I needed another project to take on the bus while I was waiting for the extra skein of yarn to be delivered.  But that also led to this: 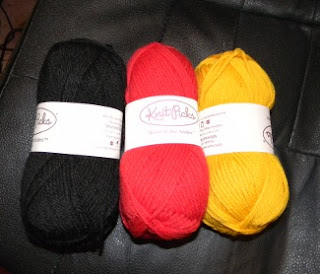 More yarn for another hat.  This will be for my brother, though he doesn't know he's getting it, so it's another surprise knit.  The colors are intentional (can you guess what it represents?); but that also lead to me buying a skein of KnitPicks Swish Worsted for the yellow (the main color) skein, and Wool of the Andes Worsted for the other two colors (which will be accent stripes, so the fact that the yarn feels a lot rougher shouldn't be an issue).  I'm planning to use this pattern here.  Hopefully, it doesn't take me as long as the last present hat, and hopefully I won't need another skein of the yellow yarn.  That would suck.  I already had accepted the fact that I had to pay shipping for this order, since there was no way I was hitting $50 on my second order of the month.  Oye.

At least Hanukkah starts December 20th this year.  It would of sucked if it started, say, now.  Or maybe it wouldn't have, since I would have already had a present for said brother, and so wouldn't have had this zany scheme, and since the other present hat is a Christmas present, it would have still worked out.  Or something like that.

And after this?  Baby knitting.  Can't do any more hats or scarves, though I would like to make another short scarf for myself at some point...and a cardigan...and a sweater...and I have way too many projects I want to do...
Posted by CompileYarn() at 10:13 PM