I should've done this Monday, but I was too busy catching up on my sweater and having a battle of wills with a mouse that made its way into my apartment (which, unfortunately, is still going on.  Good news is that I didn't see any evidence from it this morning.  Bad news is that I still haven't caught it, and it escaped one trap and hasn't touched the others I set after that). 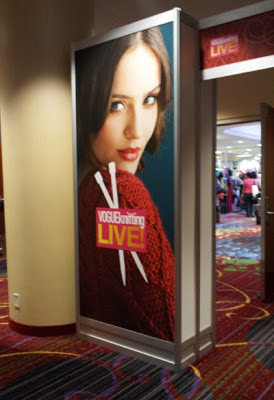 In General
I went in expecting more of last year.  It was not.  The whole...feel, I guess is a good word...was different than last year.  Last year was smaller, more fashion forward and had a summery feel to it.  This year was a lot more crowded (on Saturday at least), and the vendors and feel was way more diverse.  In some ways it was like a little Rhinebeck (with many of the same vendors), except with a slight more emphasis on fashion (instead of the more rustic feel of the NYS Sheep and Wool festival, which is to be expected).

I went both days, because like last time I signed up for a lecture on Saturday (and then met my knitting group to trawl around the marketplace), and then I went back to see the shows and the free panels on Sunday (and to trawl around the marketplace alone).  The one constant thing was that the lecture was fun, the panels were interesting (and I got a lot of knitting done), and the fashion shows were mostly horrifying.

The Lecture
I ended up signing up for Manipulating Stitch Patterns conducted by Ysolda Teague.  Unlike the last two times, I've heard of her before (actually, it was her page I found instructions to do those looped button holes for one of my last patterns, which saved my can't-be-bothered-to-plan-for-a-buttonband ass), but that's not why I picked this lecture.  I picked it because for the past four months or so I've been wondering if I shouldn't invest in a stitch dictionary, and if I do, what I will use it for.  You see, I'm pretty picky about my knitting.  There are few patterns I've seen that aren't cables or stockinette that I've liked.  But I keep telling myself I won't do cables in my next project (ha) and I should branch out a little more...or, if I don't find what I like, create it.  It's all easier said than done of course.  So I figured that this lecture should be interesting and help a bit.

While it started late (but it ended on time and provided some laughs, so I don't care), I was happy with it.  While a lot of the tips given seemed somewhat common sense (like calculating a new stitch count when adding or subtracting an element), there were still good tips for me to hear.  One of my major takeaways was an throwaway point, which is that the chart should represent what the pattern will look like.  Her example was a cable chart in that style I'm not too fond of, the one where the cross is a bunch of diagonal lines visually 'representing' the cable.

Now,  I don't like this style because it gets messy with more complicated cables.  I had to read one that had traveling cables, and I found it hard to differentiate between the K2, K2 cables and the K2, P1 cables (putting a tiny dot near the bottom left does not make a clear symbol).  Also, as many of them aren't standardized (despite what the link above tries; you'll notice that they have no traveling cables in there), they vary by just enough that it's confusing.  I can't imagine what a K4 with a P stitch in the middle cable would look like in that notation.  But Ysolda's comment of 'the chart should look like the pattern' made me realize why people like that style: taken together, the chart really does show the cable flow.  It looks like the cable, because many of the symbols look like the shape the knitting makes (of course, there are other similar styles.  Standardization doesn't exist here).

She also mentioned, in relation to that point, that the chart shouldn't be a code.  I think that's my biggest pitfall here.  I'm a programmer.  I see charts as codes, I'm conformable with charts as codes, and judge their merits as such.  I like clear, flexible codes over pictorial representation that just complicates matters.  This is why my currently preferred notation is one I learned in Aran Knitting, which looks similar to the chart in this link.

It doesn't really show the pattern when you see it as one object.  But it does give flexibility to represent all types of cables (as any cable uses a variation of the same symbols), and is much easier to write out when I'm pattern drafting (and on the computer without buying special software like she was using in the lecture).  But you do have to learn it and understand it to see the brilliance of it, which doesn't come easy to many knitters.

I also find it funny that crochet is more standerized than knitting in this respect.  But that's another topic for another day.

The other major takeaway I got was that you can fake cables with increases and decreases, and you can use ribbing to do reversible cables.  I had no clue.  That's great to know.

Fashion Shows and the Panels
I only ended up catching two full fashion shows (and bits and pieces of others), but what I saw was pretty much similar to last year.  Weird outfits, modular knitting, garments that don't flatter anything but the coat-hanger models walking down the runway (and then there was this thing.  No excuse for that monstrosity of a cardigan).  Oye.  No novelty yarns this year, though.  And there were a couple more outfits I wasn't revolted by.  Improvement, improvement.

There was two free panels, and I went to both.  One was on being a designer, which while being funny, made me really want to stay an amateur designer.  The other was on the change in knitting culture and where it was going, which was pretty predictable, but wasn't too boring.  Though one panelist had to repeat the whole 'crochet uses more yarn' myth. Ug.

Purchases
I was good, and only got one skein of yarn:

I bought it because not only was a  'oo, pretty blue!' one of a kind Madelintosh skein, it's from my old LYS (who were there, much to my surprise.  The other surprise was that they remembered me after a year of not going (while I had only been their customer for a little over a year)).

I also got another bottle of Soak to replace the one I left in my old apartment (that I bought last VKLive).  While Woolite might be cheaper, you don't have to rinse with Soak.  And it smells a lot better.

Also, the second day I texted my mom this picture: 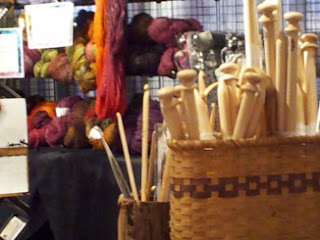 It was a joke about big crochet hooks.  The next text I get, however, was 'do they have x size?  I'll pay for it.'  Cue back and forth texts where I realized they were Tunisian crochet hooks and attracted the attention of one of the shop people, who taught me to Tunisian crochet (which isn't that hard, but I also knit and crochet, and it's obviously a weird blend of those things).  I then, while waiting for my mother's answer as to if she really wanted the Tunisian version, got hustled into buying the crochet hook. For $40.

I later found a vendor selling normal crochet hooks in the size my mother wanted for normal prices.  I ended up buying those as well.  We'll see if my mom buys the Tunisian thing off of me.  I may get stuck with it.

Conclusion
Overall, I had a good time.  It was different than I was expecting, both good and bad, but I enjoyed it.  Hopefully they'll have better trends next year (ha ha ha). 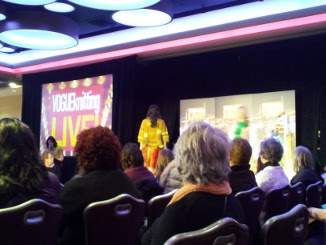