Changes
Since I overestimated by ability to keep the swatch size the same, I'm normalizing the height and width measurements by using square inches instead.  So, I'll get the amount of yarn used per square inch.  Easier that way anyway.

Also, since I'm not going by pure measurement, I didn't take pictures of all the swatches.  I did take this one to prove I did them though: 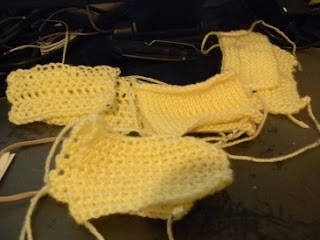 My gauges didn't come out the same either, though not very far off.  Again, since I'm using gauge to calculate the stitch width and height to get me the dimension of the stitch in square inches (I know, it's weird, but it lets me do the amount comparison) in order to get amount used per stitch, the gauge isn't a problem.  I was hoping for a more direct comparison, but oh well.

I did do the garter stitch and double crochet swatches (which is why it took me so long).

Also, to state, I'm doing everything in inches.  Not standard, but that's what I did because I'm a stupid American who just realized her tape measure has centimeters on it.  Measurements are to 1/16 of an inch.

Results
My raw results are in this chart (sorry for the size...no real way to post this without it running off the page.  However, for integrity, I want to put my raw data here):

To give my formulas:
Since that chart is large and pretty unreadable, I created these comparison table, one for amount of yarn used per sq. in. and one for amount used in a stitch.  They are both sorted min to max amount used:


There's a couple of things here I noticed right away.  The least apparent thing may be easier to see in this graph: 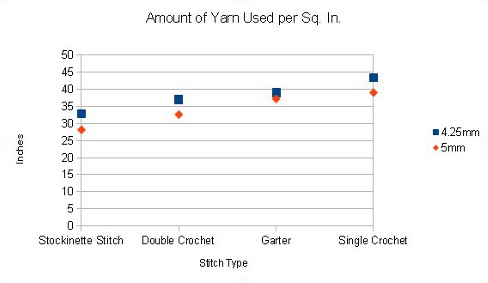 Can't see it?  I've added lines between the 4.25mm data points for on stitch and the 5mm for the next stitch: 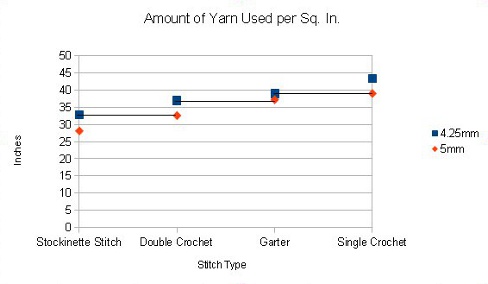 Hm.  There's a relationship here. If you order the stitches from least to most yarn used, it shows that you can go to the next stitch, and the only thing you need to do is increase the needle/hook diameter to the next up size and you'll use around the same amount of yarn. And the stitch order staggers between knitting and crochet.  This itself is a nail in the coffin for the whole '3 times more yarn' myth.  I wonder if this trend holds out if you added more diameter sizes.  I really don't want to make up more swatches to find out, though.

On the other hand, to maybe, possibly, give some credence to those who say crochet takes up more yarn, look at the table for per stitch.  Yes, it turns out that both knitting stitches I looked at use less yarn per stitch than both crochet stitches. But then look at this table:

Using the same order of stitches as the second table above, I created one with the stitches size in square inches.  So, yes, the knitting stitches take less yarn.  They also cover less area, which is what I figured. But this still doesn't settle why, when you look at square inches and not stitches, the order changes.  My guess is that the ratio of the area gained in the square inch to the amount of yarn used is not the same for each stitch, and that it would work out to be that the stitch that used the least yarn while covering the most area would be the one to use the least amount of yarn in a square inch.  I don't feel like doing that comparison.  It's not that important to this myth.

Anyway, to get back on track, we get to the final conclusion as seen in the first table (Yarn Used per Square Inch).  So, how much yarn does each craft take against the other?  It depends on the stitch you're using.  Using the same tool size:


Table is read down, then across (so pick a stitch on the left hand side, then find the stitch to compare it to at the top, then find where they meet to find the percentage more of yarn the first took against the other.  If it's negative, it took less.

None of these are anywhere close to 3 times the amount.

There's one more thing I do want to explore here, though.  Those saying that 'crochet takes more yarn' could claim is that, in reality, if a knitter and a crocheter were doing similar projects, they would pick completely different tool sizes.  And, most likely, the knitter would use a bigger tool than the crocheter (my guess based on my experience...if you can prove me wrong, let me know).  This is what I was trying to test with the 'same gauge' thing.  The problem is that the gauges aren't all that compatible between knitting and crocheting.  Should have known that.

However, the data I do have shows that this argument doesn't work either.  Look at the first table again.  If, say, a knitter wanted to crochet something that would normally be in garter stitch and still use a similar amount of yarn, just change it to double crochet.  Going from garter to double crochet results in less yarn being used, and if you go down a tool size or two (which you would), it'll use close to the same amount of yarn.  Once again, it comes down to what you're doing in that craft.  The knitter could use less yarn and therefore get more out of the same yardage, but the crocheter could do so too.

Conclusion
Therefore...myth  BUSTED.  Crocheters aren't using up all your yarn.  Actually, you may be using more yarn than a crocheter, since it all depends on stitch and tool size chosen.  And even if the crocheter is using more yarn, they're NOT using anywhere close to 3 times as much.  So stop repeating this myth.
Posted by CompileYarn() at 5:51 PM