I hear this one a lot.  I hear it in my craft group, I read it on Ravelry forms, I read jokes about it in knitting books.  In the craft world, it seems that it's common knowledge that crochet uses more yarn.

As a crocheter, knitter, and a wannabe skeptic, my first reaction to all of this is 'is it really true, or is it one of those non-facts that take a life of their own?  Does crochet really take more yarn, or is it a perception issue?'  The good news is that this can be tested, and that is exactly what I'm going to do.

Background
The first concrete quote of this fact that comes to my mind can be found in the knitting humor book Yarn Harlot: The Secret Life of a Knitter by Stephanie Pearl-McPhee, where she claims:

This is also the only quote I've read so far that gives an amount.  Three times as much?  I find that a little hard to believe, even if crochet does take up more yarn than knitting.  This also give me a starting point for my method, but I'll get to that later.

(On a unrelated note, she's the only knitting blogger I check every day.  There's a reason for that.  Go read some of her stuff.  Really.)

Unfortunately, you'll have to go with my word on the rest, as they were spoken or I can't find them again.  I did Google 'crochet yarn amount' and found a quote on a blog that repeated a variation of the above.  So it's out there.  From somewhere.

What I'm Testing and Method
So, what this comes down to is, does crochet really use more yarn?  But this is a trickier question than it looks. By what do you mean 'crochet takes up more yarn'?  The quote above mentions that crochet should take three times as more yarn as knitting for the same area, that is, the same swatch size. However, that doesn't take into account gauge.  I could knit a 6st to the inch swatch and crochet one with 3st to the inch, and I wouldn't be surprised when the knitting swatch takes up more yarn.  I could knit the same 3st to the inch, and maybe use less yarn.  I also may create a fabric with a shit-ton of holes as well.

Another way of looking at it is by calculating how much yarn each stitch in both knitting and crocheting take up.  I suspect this is where the 'fact' comes from: my guess is that a single crochet, done on the same diameter tool and in the same yarn as a knit/purl stitch would take up more yarn.  The crochet stitch would also be bigger. But that's the thing, you use more yarn but get a bigger stitch, and therefore you cover more area.  So the first way is the better way to look at it, if we standardize for gauge, though I'll do this for kicks to see if my guess has merit.

A third is by stitch type.  Single crochet will take less yarn than double crochet stitch wise, but more row wise.  Stockinette...well, I don't know enough about knitting to guesstimate it.  And once you start looking at shells or cables or any of the multitudes of ways one can manipulate yarn it gets crazy real quick.  I think this highlights the simplicity of this question (after all, if I compared my crazy cable blanket to that baby blanket I did...it'd be meaningless, actually.  One is tons of cables, the other is shells and clusters.  How do you compare the usage of yarn between them, even standardizing for size and yarn weight?).  How much yarn you're using depends on what stitches you're doing, and a simpler stitch is going to take less yarn than a crazy clusterfuck of stitchery, but it may or may not gain you more row height.  However, for the purpose of this test I will assume that what is meant is the simplest level, and by that I mean the stockinette stitch for knit and the single crochet for crochet.  Now, I know there are simpler (garter and slip stitch, to be exact), but stockinette and single crochet are the 'standard' gauge measurement stitches. They also make my life easier.

So, my official plan is:
Process
I'm using this yarn: 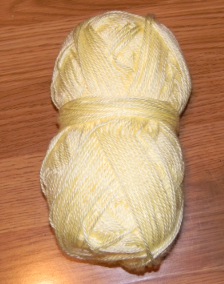 Which is a part skein of some Bernet Softee Baby.  I picked it because it's a standard, acrylic yarn that's a light color (for visibility). 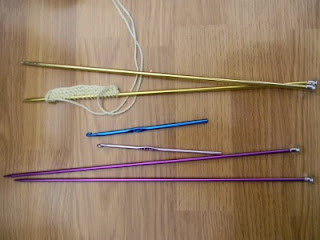 As you can see, I'm using all the same manufacturer as well.

Results
...Are to come, since I got to make all the swatches!  I have one done: 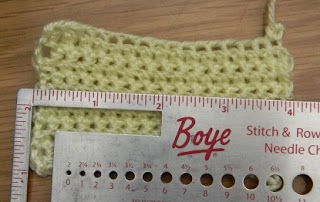 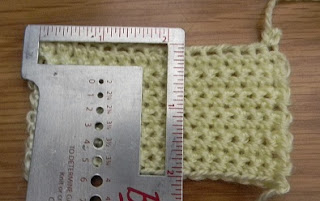 But I got to do the rest.  I do need to make sure that it's just barely 4", as my first swatch is a little on the short side.  Hence the ruler to prove that all the swatches are as close to the same size.