I figured that my next post would be the results of the test.  Didn't happen.  I still got one more swatch to do, and then I got to record everything.  I should be done next week.

And why am I not done?  Couple of reasons.  One, I hate swatching, so I'm procrastinating.  Two, I got distracted by a thousand other things.  This post is about those projects.

First off, I spent my week 1)starting the baby sweater (having done all the math for the body of the sweater, at least), 2)realizing my choice of increase sucked and therefore frogging the sweater, 3)restarting it with a new increase, 4)noticing that it looked a little big, measuring it, realizing that it was in fact an inch too big, re-measuring the gauge, realizing that I had had a gauge accident, and therefore frogging the sweater again.

This was followed by an investigation as to why I had had a gauge accident, which was found to be due to my own stupidity.  My swatch didn't lie, in fact the first swatch I did for the baby sweater was at the same gauge I was getting for the sweater itself.  The problem was that I measured it wrong the first time, and therefore every bit of math and planning I did for this pattern was 100% wrong for the size I wanted.  Yeah.  Ripping out 11 rows and having to re-do all the pattern math was not what I was aiming to do this week.

Anyway, having done that, I did get it started again:

And it is in fact the right size this time.  I checked three times.

As well, as I was knitting a garter stitch square, I was thinking about how I really shouldn't be knitting a square for my Log Cabin Afghan, and should really switch the needles back to the Crazy Cable Blanket so I could get some of that done.  Except then another train of thoughts went through my head.  You see, the baby sweater needs to be done by June (as well as the one that still needs buttons. I haven't had any luck with that).  Also, I want to knit up a small shawl using my other skein of Merino Light, and that will also need to be done by June, as I wish to wear it to my brother's bar mitzvah.  Surfing for patterns for that, I realized that I need to get my brother a present.  But what to get him...hm...what did I get for my sisters...oh, shit, I made them crocheted kippot.

This needs some back story.  You see, I originally got interested in pattern design for one reason.  When I was in high school and actually not only considered myself Jewish but was a constant participant in one of the youth groups, I wanted to make myself a kippah. I tried finding a pattern online, but that didn't net me much back in the early 2000's.  I had a vision, and I wanted that.  So, I spent most of my high school years making and trying to come up with a pattern for the perfect kippah.  Two of my best efforts of this ended up going to my sisters for their bat mitzvahs, one of them actually being very good. Unfortunately, I crocheted it as I was watching the Columbia disaster unfold on TV and therefore didn't write down what I did, and never managed to recreate it.  I, after making a bunch of failed efforts, gave up when I went to college.  This left me with a shit-ton of crochet thread that I've, for some reason, always kept around but have not done anything else with.

So guess what made a reappearance recently: 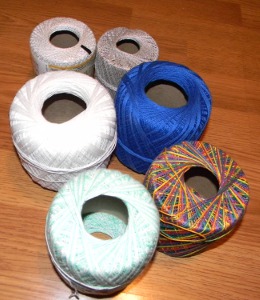 Yay stash.  Anyway, in my time on Raverly, I've noticed that they had a whole category for kippot, so I went and clicked it.  Lots of free, basic knitted and crochet patterns for kippot.  Only one problem.  None of them are for crochet thread.  So, guess what I've been doing today? 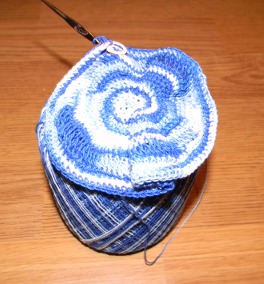 I'm once again trying to create a kippah pattern so I can also make my brother a kippah for his bar mitzvah.  In June. Oye.

Of course you may look at the start of that effort and go, 'wait, doesn't that look a little feminine for a boy?' and you would be right.  That's because after my third time starting (and after buying three different sizes of steel crochet hooks...no wonder I sucked at making kippot last time, I didn't even have the right size hook for the yarn!), I got the ripple effect that I had achieved on my only good effort last time I did this.  So I started writing down what I was doing and went with it.  Not that this little side effort hasn't given me an idea of how to make a more standard kippah, but yeah, this isn't for my brother.  Don't know what I'm going to do with it, assuming I get something out of it.  Maybe give it to my mother, since I've never made her one either (when she had her (adult) bat mitzvah, I bought her a kippah).

Now I've started something else, this leave me with four projects in progress (where did my rules go?  Threw them out when I moved, it looks like), two active which need to be done by June, and one that needs to be done by next December (given this is Crazy Cable Blanket, this isn't a sure thing.  I have to get rows done every week to potentially make that deadline).  I also have another project that isn't started that I would like to be done by June (but honestly, if I don't get my shawl it's not the end of the world).  And yarn I just bought for a hat I was hoping on making before winter ended.  And eight done squares and one in progress for a blanket I don't need, but since it's a mindless project, it gets worked on more often than Crazy Cable Blanket does.  Oh, and that swatch for my test. Do you think I've bit off more than I can chew here?
Posted by CompileYarn() at 9:51 PM