The Good Kind of Remake

In the wirlwind of projects, both craft-related and not, that I've have to complete or are completing for others, I did manage to re-visit an old project of mine.  I got better yarn and knit a new version of my Reversible Eyelet Hat. 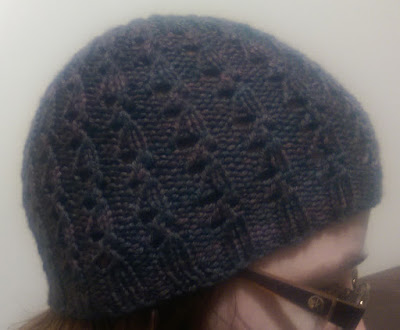 To be fair, I guess it wasn't 100% for me, though this version is better than my old one (which I still have and used). The person in my knit group who's responsible for the KALs (which work a bit differently in our group than the more traditional method) decided to focus on hats again, and out of the long list of hat patterns for it decided to list both of my hat patterns.

When she told me this, my first thought is 'dang, I wonder if the first one is good enough for that?'  The Reversible Eyelet Hat was my first knitting pattern, and it was designed on the fly in one size.  As well, I had already seen from those who did it on Ravelry that it ran big.  I also found that after the first year, my original one has stretched out as well and was big for me as well, and I prefer looser hats. So I decided to take my own pattern and re-knit it using nicer yarn, a different gauge, and less stitches.

The good news is that I found that the pattern is 99% correct.  The CO amount with the needle size it gives you will make a big hat if you have around a standard-sized women's head, but the instructions themselves are perfectly fine.  The only correction I would make is that unless you need a large hat (think around 28"), you're better off COing around 92 or 88 stitches, even 84 depending on things like the yarn and needles you're using.  I did 92 stitches using smaller needles for the re-make, but I also decided to use a wool/silk blend that had it's own stretching tendencies (this was probably not the best decision with a hat pattern that also has a tendency to stretch out, but it worked).  The good thing about that pattern is that it is super adjustable, and any multiple of 4 will work with the instructions as written (so I guess I wasn't as much of a dumbass with my first pattern as I thought).  Also, dropping down doesn't affect it as much as you would think, given the lacy and ribbed nature of the hat.  The pattern itself has a tendency to stretch, so you need to counteract that a bit.

So I didn't bother rewriting the pattern (though I will change the CO amount).  But be assured that it is doubled checked now.  Now if only I could take better pictures. 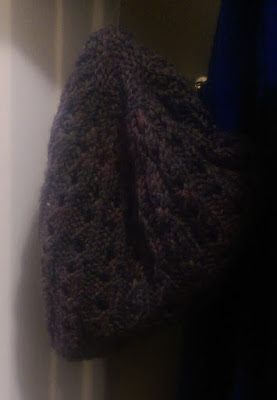