I used to have an extra baby sweater lying around, a couple of years ago, until I decided to gift it to my previous downstairs neighbors who had just had a kid.

I should have made one to replace it.  I wasn't expecting to be told a relative of mine was having a kid only two months before being due to have said kid (communication?  Why would there be communication?). However, I decided to try, and managed to pull off making a baby sweater within a month.

And because of that, there's a happy ending to this story.  I managed to mail out the sweater to have it arrive just in time for the baby to be born (as in, the relative I mailed it to took it to the hospital with her to give to the new parents). So I have that going for me.

As well, this is on top of the other relative I've known was pregnant for longer, which luckily is due in March and therefore that project is on the back burner, because holidays are coming up fast and I had to start making presents. I've already made at least two of my presents already and am working on a third: 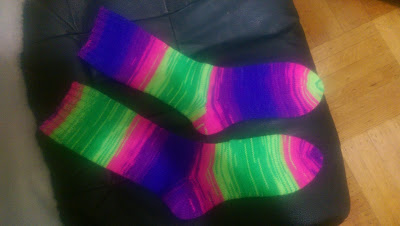 Yeah, I've got the socks done.  And a baby sweater.  And a cowl. And part of a hat.  Wow, that's a lot given that I've had no time recently (going to grad school on top of everything can do that to you.  Oh, and getting this fur-ball doesn't help either:

). At least I still have my commuting time to work on things.

Of course, the one thing I did sacrifice this year was making a Halloween costume, so I did forgo something. Can't have it all.