Too Many Frogs 'Round Here

This past month, I can't count how many times I've frogged or otherwise had to undo some work due to a mistake I made.

For the Dwindling Cables Hat, I ripped out the base band three times, attempted to pick up the stitches twice, and then had to frog most of it after I screwed up all the cable crossings.  At least after that I didn't screw up majorly again (some minor issues here and there, but nothing that couldn't be hacked easily) after that.

For the Work Cardigan (almost done; debrief will be next post), I once again didn't read the pattern closely enough and missed that I needed to increase my stitch count up the sleeve to account for the subtracted bell shape.  I figured this out after I got to the top of the sleeve cap and was wondering why I had so few stitches.  A week's work frogged out.  How long have I've been working on this again?  Almost two months now?

I then spent my last Sunday sewing in and ripping out one of the sleeves to said cardigan as I learned how to sew in a set-in sleeve.

Now I'm working on the first of a set of fingerless gloves: 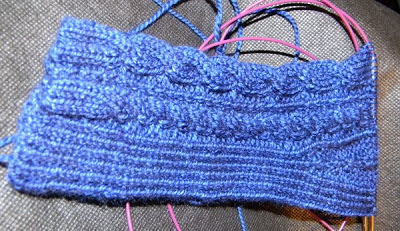 So far, I've had to drop down the stitches of one of the cables to re-cross a miss-cross, and had to rip out the start of the thumb gusset (about 5 rows) since it looked like crap.  It still looks kind of shitty, but since I stopped using the stitch markers, it's been better:

Oh, and I've decided to try another way of purling at the same time.  Which took me a couple of rows to get, and it's not so natural for me yet.  I don't know if I'll keep doing it this way or not (but that's another post).

Luckily, this is a pretty fast, easy pattern.  Yes, even with all the cables.  It's pretty logical and easy to memorize.  Despite my inability to do anything right at the moment, I love patterns like that.

Now my sweater just needs to dry again so I can finish it, oye.