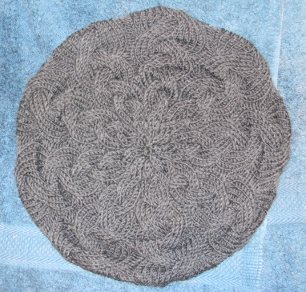 This should have not taken me a month to do, but it did.  Mainly because I was too busy working on the work sweater at the same time.  However, it didn't help that I frogged parts of this hat multiple times either.

It came out a little big, I have to say that.  Having worn it a couple of times already, I wish that I had made the band a little tighter (though that would have screwed me up on picking up the right stitch count even more, so maybe that isn't the best idea).  It stays on, but if I dart around it sometimes slips foward, and otherwise doesn't always stay where I put it.  Nothing that can't be fixed with a snap clip or two, though.

I love the way it looks, which is always a bonus.  However, I had to switch back to my heavy duty hats today due to the lovely nor'easter that's coming through my area as I type:

Supposedly its name is Nemo, which I can't hear without getting this song stuck in my head, so I'm going to ignore the Weather Channel's attempt at giving cute names to nor'easters and just call it a snow storm.  Despite everyone freaking about about it here in NYC, it's not supposed to be as bad here.  But that's NYC mentality for you...it's going to be an event enough to cause minor disruption?  Everybody panic!  Meanwhile, back in 2010:

So forgive me if I'm not currently impressed at the moment (however, those of you northeast of us that are dealing with the snow amounts in the second pic...I feel for you).  The snow falling this morning was pretty, though.  It was the right weather to have light big snowflakes and not be crazy cold outside.  I actually didn't mind walking in it this morning.  Then again, I like snow and don't mind colder weather.  I just don't like crappy slush and shoveling things and the type of cold that is bitter and biting.

Another positive thing about it was that I got to do this: 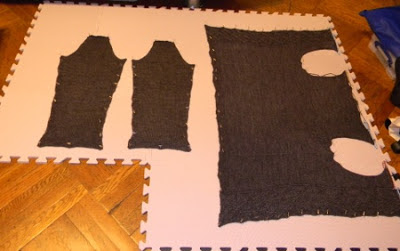 Finished the last sleeve on the subway today, and managed to get to the post office before it closed to pick up the package that contained those nice new blocking pads (one bad thing about apartment living in the city; getting packages delivered is a pain in the ass.  Especially when they decide not to bother ringing your doorbell before leaving the slip that says 'we missed you, now you have to go to the post office that's only open during your working hours most of the time!' Ug).

In other news, yes, I finally broke down and bought blocking pads.  T-pins don't really hold when your using towels on a hardwood floor, and while I can work around it for small things, this needed to be pinned out sturdily.

I'm not done, though.  I still have to sew it up and do the back of the neck (it's a bit of an odd construction).  Hopefully I can get it done within the week, though.  Then I'll have both my over-a-month long projects done.

Then I'll start something else...woops: 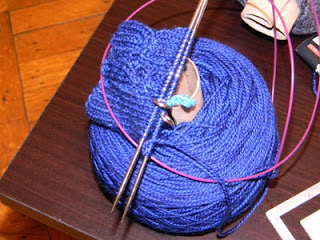 I kind of already did.

P.S.: For anyone dealing with the snow, stay safe and warm, and don't try to curse it too much.