For once, I should be doing other things such as packing and maybe trying to get some rows of Crazy Cable Blanket done, but instead I'm writing a blog post and making little pumpkin breads:

But anyway, this weekend my ass is going to be upstate, a trip for which I even took a few days off from work for (yay limited vacation time). I've stopped packing because I'm trying to convince myself that, no, I don't need to bring my whole knitting needle set because I have enough projects going that I don't need to start anything from the yarn I plan to buy at Rhinebeck before I get back home.  I'm also trying to pack for four days in a small suitcase while leaving enough room for more stuff.  Over packing (which I always do, unfortunately) is one thing.  Trying to lug an over packed suitcase on the subway and a bus is a completely different story.  My trip involves at least six staircases, crowded subways, a long distance style bus, and a long hill, and yes, you count when you're lugging bags.

I probably don't need all my projects with me either, but they're going.  Crazy Cable Blanket (of which I have 30 rows left) is going.  The spatterdashers (halfway through the second one!) are going.  Those  Log Cabin squares I make when I can't do anything else are going.  That blue crochet thing from the last post is going: 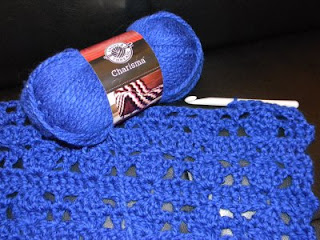 That will be my fourth posted pattern, and I swear it, because I have the pattern written down already and I'm following it.  It's a long time coming; I haven't tried making my own pattern since the baby sweater, and haven't posted one since the baby hat I did.  I'd admit, for awhile I just wasn't feeling it.  I didn't want to deal with the creative process, and I had enough projects going I didn't need to.  After really gearing up at the beginning of the year I fell flat.  I think I was hoping to get going with the design thing, but got overwhelmed with life, then said screw it and forgot about it for awhile.

Reciently, though, something clicked. It started when I went on a yarn crawl and ended up with this yarn: 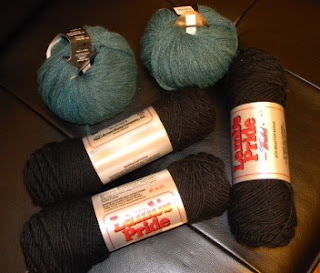 I bought the blue-green yarn with the idea of making my mom's Hanukkah present out of it.  It's alpaca, of course, and the plan was another hat.  But I wasn't sure if I would find a good pattern for it.  Then an idea hit me. I knew exactly what that hat's going to look like, and I sat down and charted out the cable I wanted and drew sketches:

Now, I haven't tested the design yet in yarn, nor written the pattern (I need to figure out how I'm doing the top still, and if I want to do a contrasting brim), but I figured after I get done with the Halloween stuff I'd get down to that.  I may need extensive modification, who knows.

Then I realized that the other yarn, which I bought thinking I had three skeins of it in my stash already, was the wrong color. 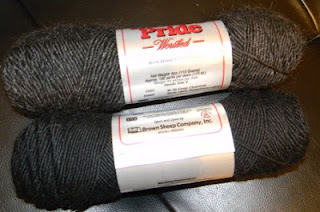 Oops.  I called the yarn store I bought the three black skeins from and asked if they had any of the charcoal color I actually have in my stash. No such luck; they didn't have it.  Now I'm stuck with three skeins of charcoal and three skeins of black yarn, which killed my first idea of what I was going to do with that yarn.

Then I realized I needed yarn for that class I'm taking at Rhinebeck.  Ok then, I'll try to come up with my first sweater pattern using that yarn.  Which may or may not happen, but that yarn's what I'm bringing to class.

I did sketch out some ideas of sweaters, though.  I'm not sure how far along this class wants you, but they mentioned bringing fashion pictures.  I don't really have any inspirational pictures right now, so I just sketched, and I'm hoping to wear the jacket I want to mimic in a cardigan pattern at some point (since, you know, it's already got a hole in it).

Finally, after setting out all these knitting projects, and knitting stuff like worsted weight yarn on size 0 needles, I decided I really needed a easy, bulky, crochet project. I also decided I needed a wrap because it was cold outside and the heat wasn't on yet in my apartment (because I was totally going to get it done before the landlord got around to turning the heat on.  Didn't happen; the heat kicked in a week ago).

Luckily I have tons of Loops & Threads Charisma in my stash that really needs to stop living there.  Out comes the big crochet hook, and I started crocheting a wrap.  Then I frogged it.  Then I crocheted a square.  Then I frogged it.  Then I searched Ravelry in vein and got sick of all the repetitive crochet blanket patterns. Then I found this stitch in a crochet stitch dictionary and thought, hm, that looks interesting.  So I charted out a repeat from memory (which meant it's different than the actual stitch dictionary version), figured out the arrangement I wanted, actually figured out my gauge for it, calculated the number of chains to do to start, and went at it.  I'm actually shocked it's coming out as nicely as it is in this yarn.  I was thinking that my pattern idea may be more suited for a worsted weight, or maybe even a sport weight, but I was doing bulky first because stash.  You'll see.  When I'm done with the bulky version, I'll post the pattern.  Then maybe I'll figure out a worsted weight one (though I would have to buy yarn for that one, oye).

But I really need to pack now.  It's amazing what you do when you have something else that needs to get done.