Magic Looping is a Good Hack

I hate DPNs (Double Pointed Needles, for the uninitiated).

Yeah, I said it.  I have never liked working on DPNs.  It's not knitting in the round that I hate; I love doing that.  As long as it's on a long circular needle, that is.  But I dread the point in my sweaters and hats where I have to pull out those crazy pointed things that stick out everywhere, catch on everything, and are a pain in the ass to knit on since you're constantly stopping to adjust the needles, move stitches, and on and on.

They also don't stop anyone from choosing to sit next to me on the bus, even when there's an empty row right in front of me.  But I digress.

This isn't to say I don't use them.  Not to say I haven't used them successfully either. But I don't like them, and more times than not, something ends up looking screwy.

Anyway, what brought it to a head this week was this: 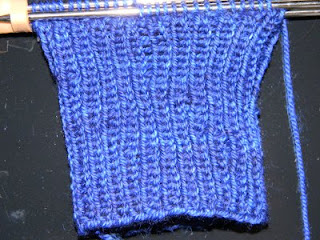 Now, we already know I suck at 1x1 ribbing, but this is a new low.  Everywhere the needles meet, there's a big open gap between the purl and knit stitches.  If you look closely, you can see where I tried the rotating trick (rotating where the joins are is supposed to help hide the ladders, as they aren't lined up in a column.  Maybe for someone else it does, oye.).  To put salt in the wound, this is all I got done in three days of bus trips (though part of that is due to bus crowding and falling asleep on the bus...lets say this is all I got done in 4 bus trips).  3 inches of ribbing.  That's it.

It is now gone.  I got sick of all the gaps and curving ribbing. I ripped it out Wednesday night.  I then sat down and looked up a video on how to magic loop.

I now have this: 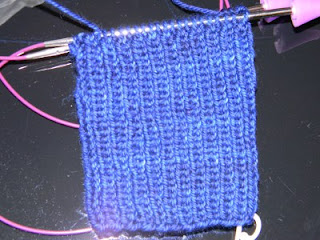 Look at it!  3 and a half inches of nice, neat, ribbing; the best 1x1 ribbing I've done so far.  And it was done in two bus trips.  No ladders.  No pointy needles clacking everywhere.  Why didn't I learn how to magic loop before?  Why did I buy every DPN from size 0 to 11 from KnitPicks when I had perfectly good needles and a long cable to knit small rounds?

I can tell you why, actually.  I bought most of the DPNs before I knew there were other ways of knitting small rounds.  And when I did learn of magic looping, most of what I was reading was along the lines of 'Why would you do that?  DPNs are superior.'  I got the idea that magic looping was a Bad Idea, a bad hack.  So I didn't go any further, and I bought more DPNs.

Well, magic looping may be a hack (after all, you are using a circular needle for something it really wasn't meant to be used for), but it's a very good one, at least for me.  I can knit faster, it works up neater, and I'm dealing with less needles.

It serves me right for ignoring the solution and wasting my time.  I shouldn't have cared.  When have I not liked a good hack?  It's like finding out that adding two lines to a stored procedure will make Microsoft Report Viewer generate columns using a stored procedure with a temporary table in it.  No, not my hack, but finding it did save my ass from having to completely destroy someone else's sproc to get rid of the temporary tables that shouldn't have been an issue in the first place (and, for the record, Microsoft Report Viewer is something else I hate.  But that's not knitting related, so I'll drop it).

Oh, and before I go, I guess I should clarify how I usually use the term hack.  A hack is a solution to a problem that doesn't actually fix the problem.  Instead, it works around the problem, and is often not pretty, efficient, or smart, but it works.  If I say I hacked something in my knitting, I usually mean I fixed my knitting mistake by doing something else instead of frogging it back and doing it right.  For example, fixing too many stitches increased by knitting two together on the next row.  That's a hack. Sometimes this is a good thing (who's going to notice an extra increase and decrease in the area under your armpits?).  Sometimes, it isn't, because the problem still exists and leaving it there or even the hack itself can cause other issues (that area where you had extra increase may now be too big, and will sag, making it noticeable anyway).

And by googling the word hack, I just found out the other word for it is kludge.  Anyone else ever hear that word used?  Kludge? Maybe it's because I'm a programmer, but I've always heard it called a hack.  Link here if you're interested.
Posted by CompileYarn() at 9:15 PM