Sometimes the Mistakes Work in My Favor

First, it's time for a beer because in this whole post, most of it works out in the end (or maybe it was time, thought I guess it's always time because it's always beer'o'clock somewhere):

Anyway...a couple of weeks ago, I started the actual knitting process for the tank I'm designing.  And started it.  And started it.  But after that, I finally got past the first five rows and managed to make some progress on the garment.

I then did the absolutely correct thing and after getting a bit into it, I steam-blocked it and re-took my gauge measurements. It turns out that, of course, the gauge swatch I made, and even took measurements on just like the class I took told me to (take a bunch and average), is a lying liar that lies.  My gauge in the project is about 0.5 stitches more per inch than I used for my calculations, and 1.5 rows less.

My first thought was 'oh, great, I got to rip it out AGAIN.'  But first, I went back to my spreadsheet and changed the gauge listed there.  I looked at the new results of my calculations.  Looked back at the garment.  It didn't seem right.  If I were to cast on the number of stitches my spreadsheet now produced with the new stitch gauge, it would be too big for me.  To test this, I tried on the little bottom strip I had.  It fit as is.

So, screw it, I'm keeping my calculations as my original stitch gauge.  This yarn has some sort of weird gauge warping ability, as this isn't the first time something's come out bigger than it should in this yarn (remember my first tank attempt?).  I should note that this is after I calculated a -1 negative ease into my calculations because I was worried about the cotton stretching too much. Oye. But that part worked out.

However, that leaves me with the row gauge being off.  Now, I had already started on the waist shaping, so changing the row gauge would mean changing the whole frequency of the shaping.  This meant I may have to rip it out, at least part way, anyway.  So, steeling myself for the inevitable, I went back to my huge spreadsheet and stuck in the new row gauge.

I then looked at the column for my custom size and went 'huh?'  It had barely changed.  All the standard size ones had changed, but my size didn't.  It didn't make any sense.  So, I kept studying it and tracing back my calculations...only to find that I had pointed to the wrong cell for a couple of the length calculations, and it was calculating a length about half of what it should be.  The waist decreases were wrong in the first place, let alone the row gauge being off.

This is where I would have thrown up my hands and walked away, except that when I fixed the calculations, the frequency of decreases it returned not only made more sense, it worked with what I had already done!  My other mistake had literally saved me from having to re-do the waist shaping already completed.

So, sometimes, they work in my favor.  If only I could say the same thing for a couple of other things I've done recently, like get a hot iron too close to an acrylic baby sweater (no, a piece of scrap linen does not work in substitute for a pillowcase), or cutting fabric (me? Cut or sew straight?  Never.  This is why I like yarn craft, you build the fabric, not cut it and attach the pieces into shapes).

And before it's asked, no, I didn't completely ruin the baby sweater with that bit of stupidity.  It's just a bit shiny and slightly different color green (yes, it looks blue in the photo.  It's not; it's green) in the front (because I was trying to get the bands to lay flat, despite the fact that that is why you knit them, but that's another post): 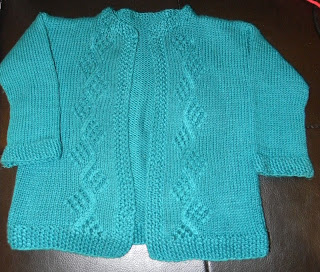 At least my first attempt at colorwork was successful: 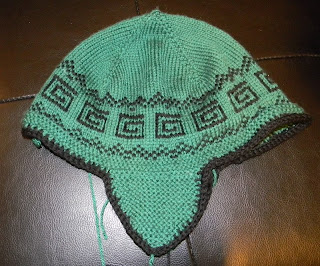