I Have No Excuse

Actually, I do have a few excuses.  They're just not very good, so I'll save the hee hawing about how I haven't done anything with this blog in more than a month and just catch up with the projects I finally managed to have time to sit down and start.

First off, though, do you remember these socks I made? 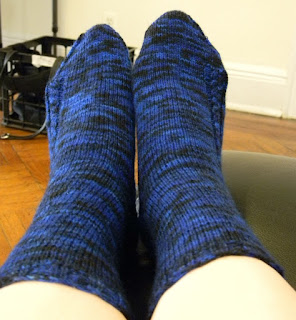 Yeah, I don't expect you to.  Anyway, they were my first pair that I knit up using a skein of

Fiber Optic Yarns Foot Notes that I randomly bought the first time I went to Rhinebeck. Just so you know, they made one tough pair of socks.  You see, they're the only wool socks I own at the moment.  Any of you in the northeast on Memorial Day weekend know that it was cold and rainy that weekend.  I went camping in it, well, until the wind broke most of our common tents on Sunday and we had to pack up and call it a trip.  However, the worst of the rain and cold was Saturday, and I wore those socks throughout most of that day (because who cares if they're not period when you're getting rained on all day).  They got wet, muddy, and absolutely trashed, to the point that they were so soaked I had to take them off because my feet were going numb from the wet and cold.

Because they were so messed up when I got back to my parent's house, I decided to throw all caution to the wind and run them through the washer (well, that and my parents don't have a good place to handwash things.  And I already had asked them if I could wash my boots in the kitchen sink).  And taa da: 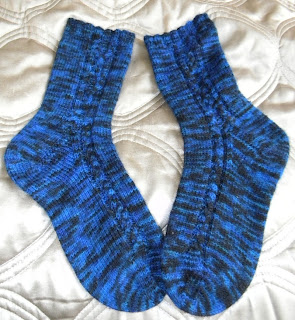 They look just as good as they did before the camping trip.  Granted, this was after I washed them again in my sink so I could block them properly (I noticed they bled somewhat when I did that, which never has happened before I machine washed them.  Luckily, I washed them alone in the sink, and with dark clothes in the machine).  But I have to say, not the softest or warmest yarn for socks, but pretty tough. Which is good.

So, now that I have more time, I've finally set down and started designing the tank I wanted to do.  Did I ever mention that before?  Anyway, I've wanted to do a purple and silver tank for awhile, though the design in my head has changed every now and then.  About a month or so ago, my knit group went on a field trip to WEBS, and I got a lot more yarn (<sarcasm>because I don't have enough of it at the moment</sarcasm>): 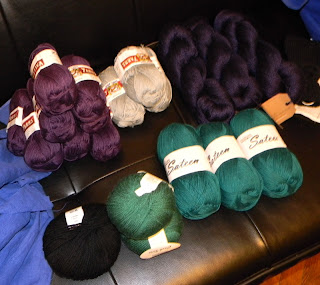 There, I managed to find a cotton yarn that wasn't Prima Cotton for once: 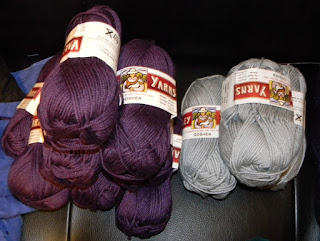 I then changed my whole idea of what I was doing and stopped there because I had other shit to do.  However, this weekend I managed to finally sit down and calculate out the measurements and stitch counts I needed to at least start the tank: 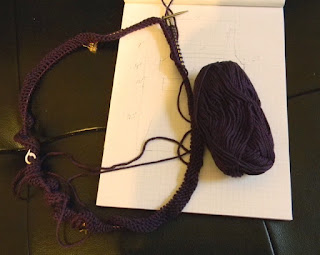 Hopefully it doesn't become a wreck.  If I'm really lucky, I'll be able to size it and have a new pattern!  Honestly, writing a shirt or sweater pattern has spooked me a bit, but that's another post.

Also, I started swatching for a baby sweater: 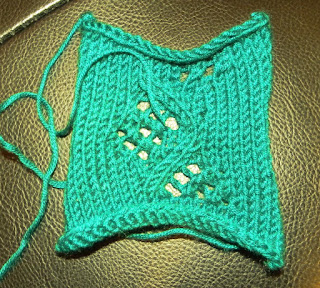 Because as luck would have it, right before I went to WEBS I found out another cousin of mine is having her second child.  So I bought yarn to do a baby sweater, which of course ended up being a sport weight yarn despite the fact that half the patterns I have are for worsted.  However, it turns out that my gauge isn't too far off for this sweater, and I just have to go a size up from the size I want to do to get that size.  It should also make a nice, lightweight cardigan (since most of my cousins live in warmer climates...boo...).

Finally, I'm still working on those other socks: 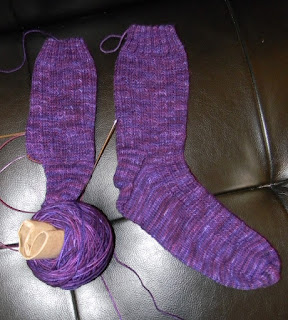 One and a half done, another half to go.  A good, easy, project with some yarn from Rhinebeck.  I tend to buy sock yarn at Rhinebeck, don't I?

Anyway, I should get back to actually getting some knitting done.  Or maybe other things done.  But knitting's better.