I Spoke Too Soon

I hate when the stupidly unexpected happens, especially when you think you're done with something and...nope!  You screwed up and now have to fix it!

You see, while I was up at my parent's house for Thanksgiving, I decided to test wash Crazy Cable Blanket.  You know, to make sure it wasn't going to fall apart or anything.  That, and it needed to be washed.

Well, the good news is that it came out of the washer and drier intact.  The bad thing is doing so unblocked the damn thing.  This is acrylic/nylon yarn.  The blocking job I did should have been permanent (and, yes, you CAN block acrylic yarn, you just have to steam block instead of wet block the item.  Oh, and unlike wool, once you block acrylic, it's always blocked.  Which, given that I tend to use acrylic when I need something that can be washed and dried, is nice).

So, this means two things: either the nylon is keeping me from doing the acrylic perma-block, or the whole pillowcase trick I used became my iron has hard water dust all in it (which I rather not get all over my knitting) didn't really block it.  Having done a bit of research after the fact, it seems that it's the latter.  I'm guessing that I was supposed to use the steam setting of the iron with the wet pillowcase  because the pillowcase isn't supposed to generate the steam.  Or I didn't iron it until the pillowcase was dry enough.  Or both.  Probably both.

Of course, I left Crazy Cable Blanket up at my parent's house as planned, which means I have to wait until I go up there again to use their non-hard-water-damaged iron to steam block it again.  This also means it will be done right before I give it to my brother....so if it doesn't stick this time, I failed.

At least the other Hanukkah present I'm making is moving: 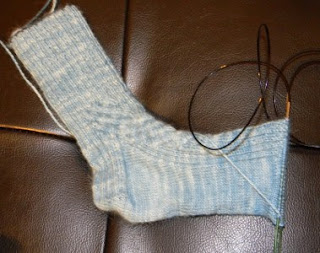