To start, I'll stop being evasive.  The reason I took a break from this blog was because I moved again.  I only moved across town, but as I wasn't planning on moving and I had time constraints, it was a little more stressful. Funnily enough I didn't have any of the more common reasons for moving; my roommates were good and I was happy enough with my room to stay for a bit.  However, our landlord had different plans. He decided not to renew the lease (ours and the other two apartments in the building) so he could renovate. My roommates and I found out two months before we had to get out.  What fun.

The good thing out of all of this is not only did I managed to stay in the same neighborhood (because I like it here and didn't want to switch neighborhoods after five months anyway), I now have my own apartment.

But that's over.  I still need some things for the apartment and I'm going to have no yarn budget until August at least, but things have calmed down for now.

However, despite everything that has happened in the past three months I managed to get every project I needed to get done for June finished.  Before June, I may add.  I'm pretty impressed with myself.

Of course, there were some compromises.  For example, the baby sweater I've been designing...well, the sweater's done:

But I didn't get the last steps written down.  You know, the hard steps where you pick up for the snap band, add the collar, and sew on the snaps.  Which means I currently have half a baby sweater pattern for a sweater that came out a little big and off proportion.  That, I, of course, changed most of my plans on anyway.  But it is done, it was done before the baby was born, which is an accomplishment.

Anyway, I don't know how thrilled I am with the pattern itself.  Everyone that's seen it in person says they like it, but it still bugs me for some reason. I don't know why.  In some ways, I'm impressed on how some of the things I did came out.  But still...

I guess what I'm saying is don't expect a pattern for it any time soon, if ever.  Maybe I'll change my mind and write it up as a free 'if you really want it' pattern.  I have to think about it.

Speaking of baby sweaters, I finally got around to sewing on the buttons for the other sweater: 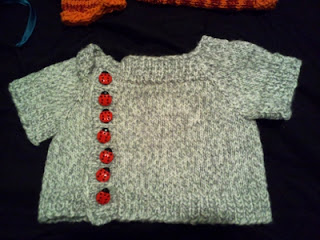 I think it came out pretty nice.

As well, I got my brother's kippah done.  It took me several times of ripping it out and re-starting, but it got done: 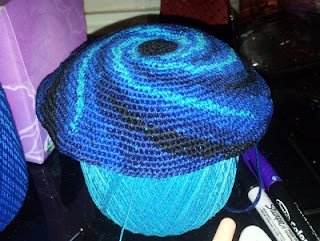 Once again, I kind of BS-ed the pattern here.  I actually started from Purl Soho's kippah pattern, but changed the ratio of increase rounds to straight rounds so it would still curve at the right rate.  I did this several times, because my prototype worked with one ratio (which took a couple of times to figure out on its own), but once I started using multiple colors I had to change it again.  It's still not perfect; the top is still a little too pointy for my taste (can't tell in the picture because I blocked it dented in here), but there was no way I was pulling it back out again.

The swirly pattern on the kippah is supposed to be something getting sucked into the black hole on the top, but for simplicity purposes when making it, I ended up doing a galaxy spiral with way too many arms around it instead (spiral galaxies have only two arms; the multiple arms you see are branches off from the main two.  My first idea was to map out a spiral galaxy for the color work pattern.  It got too complicated, so I went 'screw it'.  I then tried the black hole idea, that got too complicated, so I went with the above because I didn't actually have to plan and follow a chart that way.  Yes, I'm lazy sometimes).  So it's not technically right from an astronomical standpoint.   This may only be important to me.  For some reason I still named it the Galaxy Kippah.

Also, working with up to four threads of yarn for the color-work was a pain in the ass.  I wasn't that great with it either.  I, having of course done no research on how to do stranded crochet color work, carried the yarn by crocheting the stitches around the other threads so that they lived between the back and the front of the stitch.  Unfortunately, this means there's a few places where you can see a bit of the other color peaking out.  And I still haven't done in research on crochet color work.

On the other hand, my brother loved it.  So I have that going for me.

And I think that's all of my June projects.  Now I just have to actually work on Crazy Cable Blanket:

Preferably with huge box-mix cookies that I decided to bake instead of blogging earlier this evening, and some tea:

Ah, the joys of having your own space.
Posted by CompileYarn() at 8:54 PM