I'm sure we all have that one mistake (or more) we've made while learning to knit, where we look back at it years later when we're more experienced and go 'Holy shit, how the hell did I do that?'  I'm not talking about the mistake you catch a few rows away and decide not to fix, nor the mistake you make when you think you can read the mind of the pattern writer from miles away and therefore read in the pattern directions that happen to not be in the pattern.  No, I'm talking about being oblivious to the fact that you're knitting wrong for a whole year because you never saw anyone knit in person.  That kind of mistake.

Being that it took several tries of Googling this issue before I found out what I was doing wrong, I wish to embarrass myself and show you exactly what I did wrong.  Welcome to the first post in my new series, Guides for Self-Taught Knitters.

The Mistake
Pop quiz: Can you tell the difference between these two hats? (Other than the fact that the top and brim is bigger on one): 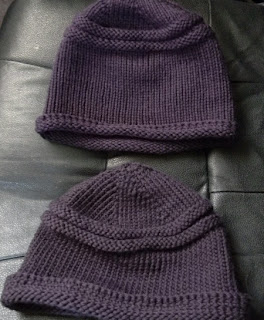 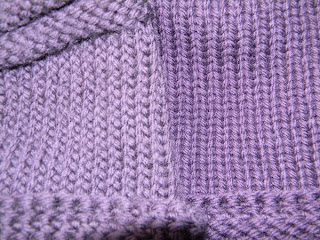 Notice how in the left hat, the stitches seem to be tighter, with one side sticking out over the other, instead of flat and more open in the right one?  That's because in the left hat, all the knit stitches (which are all the knit-side stitches, since these hats were knit in the round) are twisted. What do I mean by 'twisted'?  Well, first, you need to go to this page to see a schematic of what a knit stitch is supposed to look like.  Notice how all the loops are open, and one row of yarn waves through the loops above and below it?  That's how stockinette should look like, and it how the right side hat was done.  Twisted stitches, on the other hand, are where the 'U' and/or upside down 'U' shapes in the diagram end up not 'U's, but crossed:

That red row in my badly 'shopped schematic is what every knit row in that hat on the left side is.  While it still creates the semblance of a 'U' shape, it pulls all the stitches tighter than they should be, which we'll see produces a whole host of unintentional side effects.

The Symptoms
You may be suffering from twisted knit and/or purl stitches if your projects are doing one or more of the following:

1) When you stretch a piece done in stockinette and/or ribbing, the stitches pull closed, not open, and the sides of the stockinette columns look like ladders: 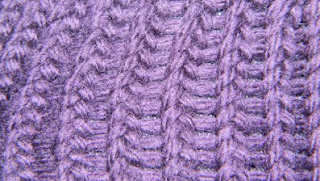 2) Your ribbing sucks.  More specifically, the side in which you are not twisting your stitches (unless you're twisting both your knits and purls, in which you wouldn't have this issue) is gaping wide open, and you can't get it not to do that by knitting tighter.  Also, you have huge ladders between the columns (It'll look a bit like the stretched picture above; but unfortunately, I don't have a good example of this one).
If you want to test this, knit a round in 3x1 ribbing.  It will be obvious.

3) When knitting a raglan round sweater, the increase lines aren't straight.  Instead, it looks like one line is bigger than the other, though when you measure it, it's not: 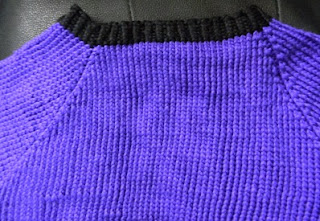 4) When knitting stockinette in the round, the columns of stitches curve around the tube: 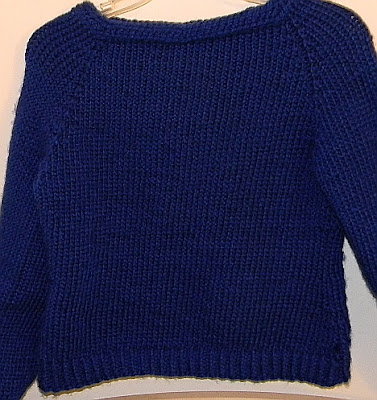 6) The columns of stockinette don't lie flat; there's a definite edge on one side (this will be the side in which the 'leg' of the loop is on top).  See the second picture of this post.

Of course, there may be more here I never ran into.  As well, depending on exactly how you're producing the twisting, or if you're making another mistake on top of it, will change exactly what symptoms you're seeing.


Causes and Corrections
Since there are so may different ways to knit and purl properly, there are so many ways you could be screwing it up to produce the twisted stitches.  There is one constant here, though.  If you're knitting into the front of the loop (otherwise known as the knit stitch, where the needle is placed in the right leg of the loop from left to right), if the left side of the loop is facing the front, you're going to twist your stitch.  If you're knitting into the back of the loop and the right leg is facing you, you will twist your stitch as well.

To tell you how I did it, you first need to read up on the English knitting style, if you're not familiar with the term.  This is one of the two most common styles of knitting in the Western world, and if you learned how to knit out of a book, you most likely learned this method of knitting.

If you answered 'clockwise', you would be wrong, and you just found the reason all your knit stitches are twisted.  You wrap the yarn counter-clockwise in English style.  Unfortunately, the book I learned out of did not have very clear instructions, as it didn't state this fact.  Then again, this was also the book where I first thought knitting in the back of the loop was how one actually knit, but at least it only took me one project to figure that one out (see this project for an example of that, combined with the twisted stitches issue).

Correcting one's action depends on how one was screwing up in the first place.  To correct the mistake I made, you just need to train yourself to throw the yarn counter-clockwise.  Or, you can do what I did, which was to say 'screw this, I'm learning how to knit continental style.'

On that note, I'm thinking my second guide should be on knitting styles, as the books I've seen tend to say 'this is how you knit' without explaining that there are so many different ways one can knit (and purl) correctly.
Posted by CompileYarn() at 10:00 PM

Email ThisBlogThis!Share to TwitterShare to FacebookShare to Pinterest
Labels: Guides for Self-Taught Knitters, idiots can do it and I can't, knitting, knitting in the round, learning to knit, SelfTeachingGuides