For my first serious post, I'm going to start a series comparing knitting (which is what I mostly do now) and crochet (my first love).  This one will be about the tools requires for the trade, and how they compare to each other.  And I have pictures, since earlier today I decided to re-organize all my craft tools.

But first, I would like to announce that I finished this: 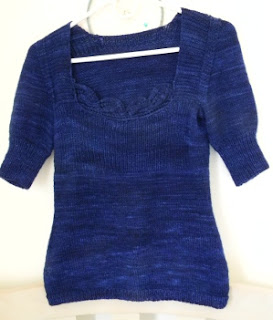 I'll go over my final thoughts on it in a write-and-dash post later.  Now, to the comparison.

To knit one simple project, you really only need two needles of the correct size. You may also need something like a stitch marker or a counter, but I won't count those because you need them for both crafts.  That's it.  Simple, right?

Nope.  Not in the slightest.  One of the more shocking things to me about knitting was how may damn needles you need to do all the projects you want to do.  Want to knit a sweater?  Depending on the sweater, you may be able to get away with a set of straight needles in the correct diameter (if knit flat or a cardigan), or you may need one or a couple of circular needles in the correct size and length, and a set of DPNs or longer circular needle to do the sleeves.  If it has ribbing, you usually need another set of needles a size down.  If you do hats, you usually use 16" circulars and DPNs, or a longer circular to Magic Loop the whole hat, presuming the hat's worked in the round.  For socks, you'll need tiny DPNs or long circulars that you most likely wouldn't be using for other projects. I could go on and on.  The thing is, if you knit anything and everything like me (well, not everything. I haven't gotten to socks yet since I don't usually like to wear them, but I will eventually) in any and all yarn weights (I've knitted everything from super bulky to light fingering), you end up needing a lot of different needles.  If you're a person who prefers straight needles (not me), you're going to need a whole set of straights, a whole set of DPNs, and some circulars for those random projects that need to be knitted in large rounds.  If you like circulars like me, you maybe could get away with less needles, assuming you prefer magic loop as well and don't buy a whole set of DPNs before you realize that.

That's the other thing, though.  If you're new, you're usually directed to the straight, cheapo needles and set to go (unless, of course, you learned from someone who preferred differently and/or knew better).  That's what I started on, having learned out of a book bought at a big-box craft store.  Then, if you expand your horizons beyond scarfs, you'll mostly likely find your way to DPNs and circulars when needed.  If you don't hate circulars and/or don't absolutely love and can't deal without straight needles or just prefer circulars, you would be smart to sit back, realize that in order to do all the things you want to do, you'd need to buy not only a different size needle, but 3-5 different lengths for the circulars, so it'd make sense to invest in a interchangeable set now, before you buy all those needles.  You'd be really smart to realize that you prefer magic loop before you buy all the DPNs, but hey, it's the price I pay for learning without another knitter around.

Anyway, here's all my current tools: 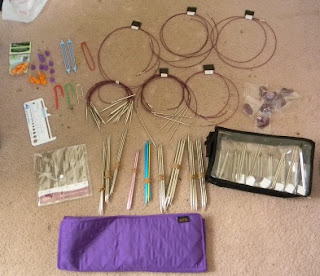 I was lucky and realized I preferred circulars and things knitted in the round early, so I went and bought the interchangeable set from KnitPicks, which definitely has saved me money and kept my needle count down.  I chose this one because I prefer metal needles and decent prices, and the other two metal sets in existence didn't fit both criteria (Boye's is cheap, both in price and quality, and the other one (I'm blanking on the brand) was more expensive for less sizes).  I've had a couple of issues with the cables popping out of the metal screw top, and needles becoming unscrewed despite being tightened, but nothing major or constant (and KnitPicks did replace a cable for free when it broke on me the first time I used it.  They're pretty good about that).  And I have to say, I love the sharp points.  My right index finger will beg to differ, but that's all right.

Oh, and I still need more needles if I ever get around to that sock, since the smallest interchangeable head is a US 4, and I don't own a solid US 0, 1, or 2 in a length above 24".

Also note the notions in the right hand corner.  Needle caps, cable needles, stitch holders...all notions unique to knitting.  Even with the interchangeable set keeping some of the cost down, I'd have to say that all those tools in that picture are worth around $200 US dollars (still need to actually tally it).  Not counting the purple holder at the bottom, which has the straights I bought before I went circular and interchangeable: 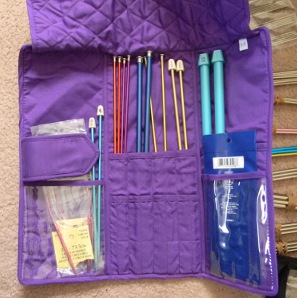 So, what do you need to crochet anything and everything?  This: 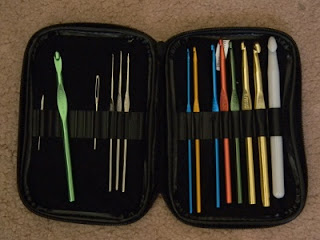 That's it.  Well, it's not all the crochet hook sizes you can get (I don't own my own Q or M hook, nor all the 'steel' ones), and I managed to lose my G hook when it fell out of a hole in the plastic bag I had a project it (which, ironically, was a knitting project.  I was carrying it around to pick up stitches if I needed to), but that's all the crochet hooks I've ever used.  I've crocheted everything from super bulky yarn to crochet thread as well, so it's a good range.  That whole thing cost me around $40.  If I got the rest of the set, it would cost me around $60-$70.  Of course, this presumes you get the same hooks I did, which the cheap Boye ones (which are fine since I prefer metal hooks, and all a crochet hook has to do is hook the yarn through a loop.  I also prefer the hook shape on the Boye's; there's another cheap brand that does a different style hook, and I don't like it.  That's probably what the green, extra K hook I have on the left is.  I never use that hook).  If you go to a mid-upper-level style of hook, it may cost more more like $100 (though I just looked, and you can even get a Clover soft set for $40, though you may  need a couple extra sizes).

So, in terms of tools, crochet is pretty good.  Only need a small set of crochet hooks, maybe some shared notions like a stitch marker and/or row counter, and you're set.  Knitting requires way more tools and notions, and that costs money.  Also, due to the way you use knitting needles, quality becomes a lot more important, also upping the cost.  In conclusion, if you're really broke and don't already knit or crochet, learn how to crochet.  Or stick to one area of knitting, so you don't need as many tools.  Or find a knitting friend that will loan you stuff.  They all work. If you're not broke, then just be prepared to spend a lot building up your tool stash if you're learning to knit.  Or ignore how much money you're spending on your hobby.  Either way works.
Posted by CompileYarn() at 7:00 PM